Virginia is a big F*ing deal

Democrats win a race they lost by 17 points in 2009, and the Obama coalition endured without Obama on the ballot 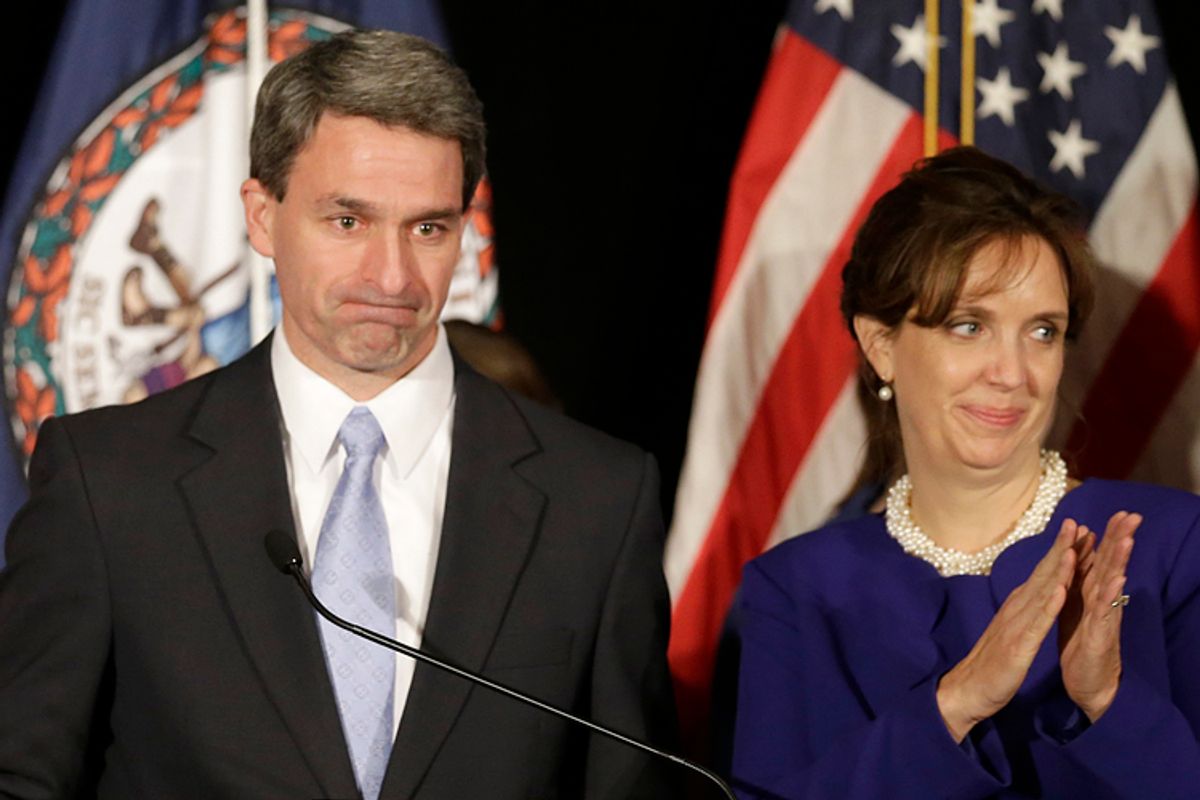 OK, OK, with some pre-election polling showing Democrat Terry McAuliffe creaming Tea Party darling Ken Cuccinelli, maybe it was inevitable that McAuliffe’s 3-point victory in the Virginia governor’s race would be framed as an underwhelming win -- maybe even a symbolic defeat! -- by media folks looking for the savvy, counterintuitive spin. The National Journal’s Josh Kraushaar tweeted, “Fact that fringe candidate with little money came win 5 pts of beating a pro w outside groups spending big is a sign of tea party *strength*.” Even the very smart Ezra Klein found “worrying signs for Democrats in the Virginia exit poll.”

Actually, what the exit poll found was that McAuliffe roughly tied President Obama in turning out the Obama coalition, except for young voters, whose participation dipped more than the poll’s margin of error. Given that Democrats lost the Virginia governor’s race by 17 points in 2009, winning by 3 points doesn’t seem like cause to worry. (And compared to the 2009 race, young voters increased their turnout, and Democrats did slightly better, according to Rock the Vote.)

There are two big lessons from Virginia. Abortion matters. Twenty percent of voters said it was their top issue, and they broke overwhelmingly for McAuliffe. And African-American voters continue to be the most reliable pillar of the Democratic base.  Black voter turnout was identical to 2012, chastening people who suggest the Democrats won’t do as well without Obama’s name on the ballot. Where McAuliffe lost white voters 56-36 to Cuccinelli, he won nine of 10 black voters.

Yes, there was some disappointing data in the Virginia results. The gender gap wasn’t nearly as wide as pre-election polling suggested, with women breaking for McAuliffe by 9 points instead of the 24 points in the last Washington Post poll. And Cuccinelli won white women (what the hell, my white sisters?). In fact, McAuliffe did worse with Virginia white voters than Obama did, suggesting that all won’t be well for Democrats with white voters once the black man is off the ballot.

The biggest gulf (besides race) wasn’t a gender gap but a marriage gap: 70 percent of unmarried women supported McAuliffe, suggesting that women’s groups’ work on the issues of contraception and abortion made a difference.

It’s also worth noting that McAuliffe won without softening his support for gun control – he backs an assault weapons ban -- in this NRA-friendly state. McAuliffe gets little credit in the media for his own victory, which is mostly attributed to the extremism of Cuccinelli, but it’s worth noting that he wasn’t afraid to campaign on the issues of abortion rights and gay marriage in a state where conventional wisdom told Democrats to play down social issues. Now that seems like a no-brainer, but it wasn’t from the start.

There are some cautionary signals in the Virginia turnout data. Through the end, Cuccinelli continued to play to his base, believing loyal Republican turnout would be higher than Democratic turnout in an off-year election. He was wrong, but not by much. That a Tea Party extremist can get 45 percent of the vote in a purple state shows that Republicans can still rely on the voting habits of older white voters to provide them with an electoral floor, however bad their candidates may be. Klein is right to point out that senior voters increased their share of the electorate compared to 2012, but that was probably inevitable.

The Virginia results also show why Republicans are working overtime to suppress black voters. Anyone who cares about 2014 and 2016 (are you listening, Hillary Clinton?) should be making voting rights and turnout efforts their No. 1 issue, starting today.  Virginia shows that it’s going to be tough, though not impossible, for Democrats to make 2014 the kind of “wave” election that could let them take back the House of Representatives, as they did in 2006. But it also shows that the so-called Obama coalition can survive without anyone by that name on the ballot.