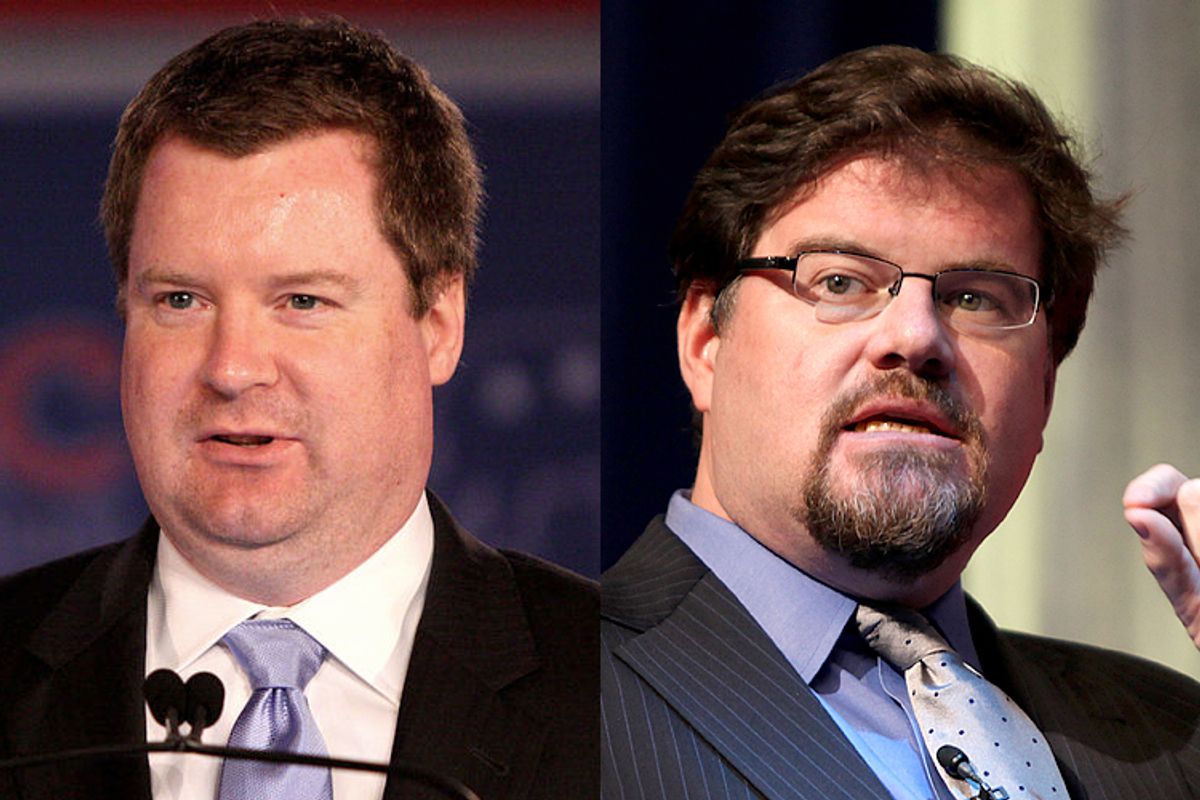 The fun thing about political analysis is that any election can mean almost anything if you want it to badly enough. Last Tuesday, there were a handful of local elections spread across the country. Hardly any of them had much at all to do with national politics in any way. But some of them took place where all the political journalists live, or at least close to where all of the political journalists live, and so it was quite easy to knock out a column about What This Election Meant For America or 2014 or 2016. Sometimes the same election can mean two wildly different and contradictory things!

Take Virginia, where the governor's race turned out to be a very close one, won, by a slim margin, by Democrat Terry McAuliffe. It proved, conclusively, two things: That, to be competitive, Republicans must "double down" on real conservatism and attacking Obamacare, and that to be competitive Republicans must moderate their stances on social issues and try harder to appeal to moderates and libertarians. Jonah Goldberg says the Republican National Committee and "moderate Republican donors" stabbed Cuccinelli in the back and he could've won with their support. You will not be surprised to learn that Erick Erickson feels similarly. If it weren't for the RINOs, Cuccinelli would be the next governor of Virginia.

Except maybe Cuccinelli's loss happened in part because voters who disapprove of Obamacare still don't want to repeal the ACA? Or maybe positions on the ACA weren't relevant at all! Maybe the race was always close, and McAuliffe won because voters hated both candidates, but hated him just a bit less? Also, maybe, Virginia is getting younger and more diverse and therefore more liberal each election cycle.

The professional centrists believe, as Phillip Bump writes, what they always believe: That every election shows that centrism is always the answer. Carter Eskew and the Washington Post editorial board both agree that McAuliffe's victory, and Cuccinelli's defeat, are proof that "moderates win."

Let’s start with the gender gap. Christie proved not just able to bridge it but reverse it. He won women by 15 points against a woman challenger, Democrat Barbara Buono. Christie counts himself as anti-abortion rights, but he isn’t obsessive about it in the same way that, say, Ken Cuccinelli ideologically and theologically approaches restricting a woman’s right to choose, which led him to lose suburban Virginia women decisively. The lesson? Extremism alienates. Moderation matters.

I don't entirely disagree, though this should be rephrased for accuracy: "Moderation matters" in the sense that sounding like a moderate is a superior strategy to not sounding like one, and it has the secondary benefit of making it easier to pursue non-moderate policy goals. That's why it barely matters that Christie has strenuously denied being a moderate, and that you have to do a bit of searching to find actual issues on which he meaningfully differs from the current conservative line. He is perceived as a moderate, so, sure, fair enough, "moderates win elections." In liberal states. When their opponents are abandoned by the national party and many of its richest fundraisers.

(In New York, meanwhile -- a city with a population larger than that of the state of Virginia, for what it's worth -- the guy who ran the left-most campaign in the Democratic primary just handily beat a model moderate Republican. Centrism: It works sometimes in some places, sort of, depending on how you define it!)

But is moderation, even purely rhetorical moderation, Christie's one weird trick to win elections everywhere? Christie has perhaps provided a blueprint for a Republican to win in the Northeast, but his strategy relies heavily on the direct assistance of Democrats. It will be much harder for Christie, or any Republican would-be moderate, to convince Democrats to simply not campaign against him or her in future elections. (Like, for example, expect to hear Gov. Christie referred to as a "former lobbyist" a bit more often as 2016 draws nearer.) Christie was lucky enough to run against a historically bad and hated Democratic governor in his first election, and for various reasons Democrats decided it would just be easier to get the hell out of his way (or actively support him) than actually challenge him at all in his reelection. That might not be a replicable model.

So these are the lessons of Election Night 2013: Moderation matters, true conservatives can win if the RINOs aren't too scared to back them, the GOP must move to the center and also it doesn't need to move the center, and all liberal populist victories are flukes that Democrats should take no lessons from ever.