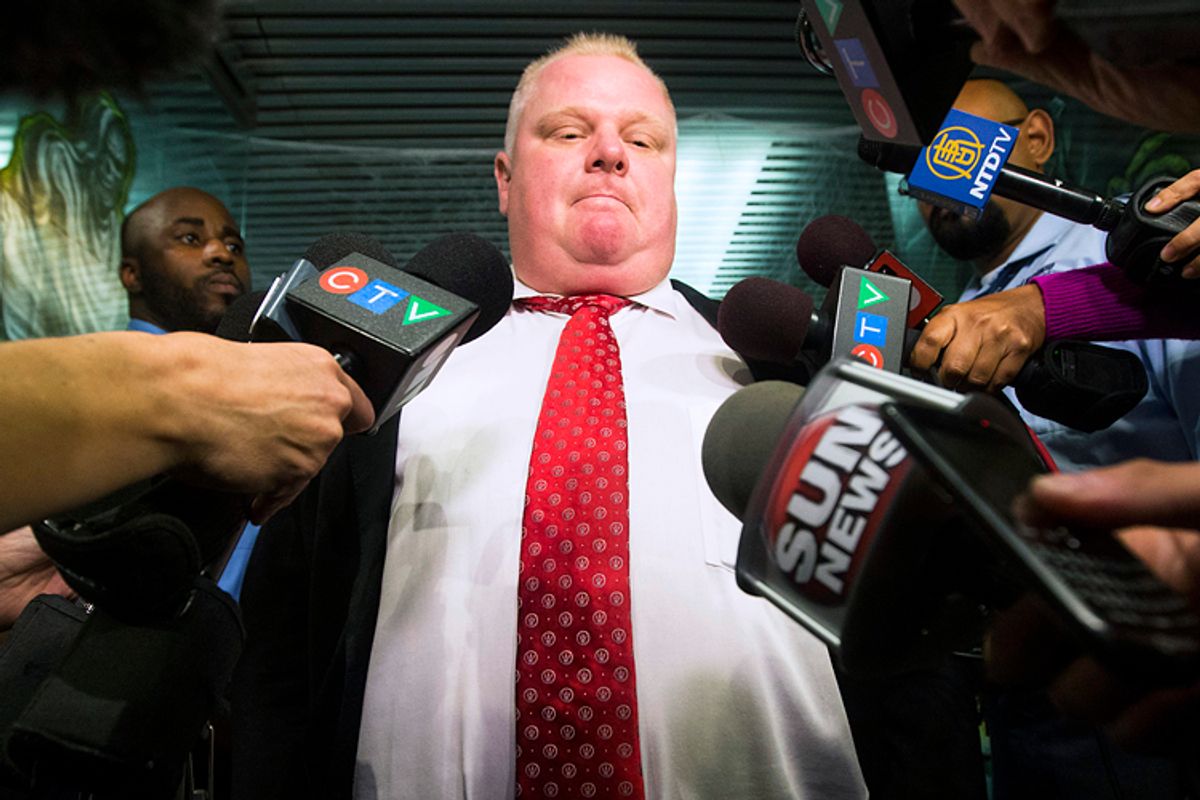 Toronto Mayor Rob Ford’s admission yesterday that he smoked crack “in one of [his] drunken stupors” brings a long-awaited end to the "did he or didn’t he" saga. But it hasn’t yet ended his career as mayor, much to the embarrassment and despair of many Torontonians. Nor will this admission, necessarily.

On the morning prior to his announcement, polls showed that news of the crack-smoking video’s authenticity caused a 5 percent uptick in Ford’s approval. Speaking to the CBC, University of Toronto politics professor Nelson Wiseman said, “I think he could easily get reelected,” noting that Ford’s base of voters were most concerned with the mayor’s pledge to “stop the gravy-train” at Toronto’s City Hall.

Ford has staked his image on the illusion that he’s some run-of-the-mill hoser, just like you and me (provided that we’re both white guys who like football and hate the idea that City Hall is burning through our precious tax dollars). In doing so, he’s made himself Canada’s leading exemplar of the Tea Party model of identity politics; he’s a rich white guy who portrays himself as the angry little guy. In doing so he leverages phony right-wing populism to win working-class votes.

As various pundits have noticed, Ford has built his career attacking both those he perceives as the coddled poor and the spoiled elite in city government. This strategy has worked in his favor with Toronto’s people who feel their taxes are being poorly spent. But in office Ford has been hit with scandal after scandal related to the improper use of public funds. What Ford rarely says is that his father was a millionaire businessman who sat in the Ontario legislature between 1995 and 1999 as part of the province’s Progressive Conservative Party, during a period of privatization, tax cuts and brutal cuts to social programs.

Ford has succeeded in Toronto's working-class neighborhoods by campaigning on issues that appeal to their needs (most notably his plan to extend the city’s subway to the far-flung suburbs). And the rest of Ford Nation, as Ford calls his supporters, is united in the almost fundamentalist belief that he will save them tax money.

Part of Ford’s costume as an average guy is a readiness to admit that he likes to party — a cheery euphemism for his substance abuse problems. He likes to party enough that he showed up this summer at Toronto street festival Taste of the Danforth “hammered” – his word. At the festival he was caught  on video shouting, “Let’s party” and apparently “Do you want some blow? I can get you some blow.” (It has also been suggested that he was offering cologne.)This was far from the first incident of Ford appearing in public intoxicated. Beginning with his first DUI in 1999, a year before his election to Toronto City Council, he has been “hammered” or more in plenty of places.

In 2007, he was ejected from a Toronto Maple Leafs game for drunkenly yelling at a fan who asked him to be quiet, “Who the fuck do you think you are? Are you a fucking teacher? Do you want your little wife to go over to Iran and get raped and shot?” On St. Patrick’s Day last year, he was seen stumbling down the street “inebriated and sweaty but in a jovial way,” before being ejected from a private party later that night for, according to the Toronto Star,  “fighting and carrying on ‘like an idiot,’ [… and] ‘storming the dance floor.’”

He’s been photographed seemingly drunk with a bachelorette party, and spotted at Wal-Mart late at night wearing pajama pants and a hoodie. In February, he arrived late to the ball honoring Canadian soldiers, where he was described as “rambling” and “incoherent” — he was once again asked to leave. At a party for the Canadian Jewish Political Action Committee in March, former mayoral rival Sarah Thomson alleged that he groped her buttocks while the two posed for a picture together and told her, she "should have been [on his recent vacation] in Florida with him because his wife wasn't there"; she said at the time that his behavior was consistent with someone on cocaine.

Much of this has been dismissed by his supporters as the behavior of a guy who likes to have a few drinks. It says nothing of the charges of assault and uttering death threats laid against him by his wife, Renata, in 2008 (the charges were dropped), or the call she made to police on Christmas Eve of 2011 following a domestic dispute or the 911 call his mother-in-law made the next day claiming that Ford was drunk and attempting to take his children to Florida against Renata’s wishes (no charges were laid; Doug Ford, the mayor's brother, later claimed it was a “misunderstanding” that was “blown out of proportion”).

Ford is also a big football fan, enough of one that he invited his high-school football coach David Price to join his team at City Hall, inventing an estimated $130,000 per year position in his office (“director of operations and logistics”) that he would not describe to the media — Price later repaid Ford by making a series of supportive calls to Ford’s radio show claiming to be different people. Though he was dismissed as head coach of Etobicoke’s Don Bosco Catholic Secondary School’s football team following the initial rush of crack accusations in May, Ford had by that time already hired a former drug enforcer with a history of violent crimes to coach the team.

Perhaps most famously, Ford used official City Council letterhead to solicit donations to his football charity from lobbyists registered with the city. Despite having been warned by the speaker that he was in a potential conflict of interest, he then voted against a city council motion to force him to pay back the money he received. In the court case that followed, Ford claimed he did not understand the meaning of “conflict of interest,” maintaining that he had never read the Municipal Conflict of Interest Act or the City of Toronto councillor orientation handbook, which described potential conflict-of-interest situations, and had never attended the City Council training sessions in which conflicts of interest were discussed.

But Ford’s antics, spectacular though they are, tend to distract from his fundamental political orientation, which has always been defined by vicious, xenophobic conservatism bred by entitlement. He strongly opposes immigration to Toronto (a city of more than 49 percent visible minorities): In 2003 he suggested the city declare itself a “refugee-free zone,” was quoted in 2008 as saying “Those Oriental people work like dogs. […] I’m telling you, the Oriental people, they’re slowly taking over,” and in 2010 argued for an immigration cap. He successfully fought a 2002 attempt to widen the city’s network of homeless shelters outside of downtown, saying, “This is an insult to my constituents to even think about having a homeless shelter in their ward. And you want me to have a public meeting to discuss this? Why don’t we have a public lynching?”

He has fought a long campaign against Toronto cyclists, whom he has described as “a pain in the ass,” arguing that cyclists are to blame whenever one of them gets killed, and spending $300,000 to remove bicycle lanes from one city thoroughfare. Though he has achieved suburban support for his subway plan, it comes at the expense of plans for a light rail system that the city of Toronto had already finalized. Canceling the plan cost the city $65 million in penalties.

On gay and lesbian issues Ford has been particularly consistent, from his 2001 and 2005 attacks on government grants for causes benefiting gay and transgender people to his 2006 argument against an AIDS prevention program, which culminated in his saying, “If you are not doing needles and you are not gay, you wouldn’t get AIDS probably. That’s the bottom line […] How are women getting it? Maybe they are sleeping with bisexual men.” Not surprisingly, every year since his election, Ford has avoided participating in Toronto’s Gay Pride parade (the first mayor of the amalgamated Toronto to miss the event), and has even gone so far as to skip the ceremony for the raising of a Gay Pride flag immediately outside of his office.

But the city is, as Ford has said, “open for business,” meaning that lobbying has exploded at City Hall according to the Toronto Star, tripling between 2010 and 2012 — alongside allegations of misconduct, which also tripled. Contact between lobbyists and Toronto politicians alsoincreased by a factor of 10 following Ford’s election.

But it’s the crack smoking that brings Ford’s politics full-circle. Conservative that he is, in 2005 he attacked a Toronto Public Health report recommending such harm-reduction approaches as safer-use crack kits to prevent the spread of illness among drug addicts, calling the efforts “enabling” and saying that only “tough love” can help drug addiction.

Naturally, Ford critics will fall upon these comments as evidence of his hypocrisy and corruption, but it’s not Ford’s substance-abuse problems that highlight his inability to govern properly. Rather, from the beginning of his time in office as a city councillor, he has ruled with a combination of ignorance and self-interest, dismissing numerous scandals and allegations of corruption out of hand, attempting always to draw the public’s attention back to the supposed “gravy train.” For some reason, it still seems to be working for members of Ford Nation. Following his admission yesterday, 60 percent of Torontonians polled said they felt he should resign, but 30 percent of Toronto residents remained steadfast in their support for him. Their position might be summed up in the words of one suburban shopper interviewed by the CBC at a strip mall in Ford’s home neighborhood of Etobicoke, “If he smokes and saves me money, I'll vote for him, even if he's a bum.”