New schism on the right: Ideologues fight to own Billy Graham's legacy 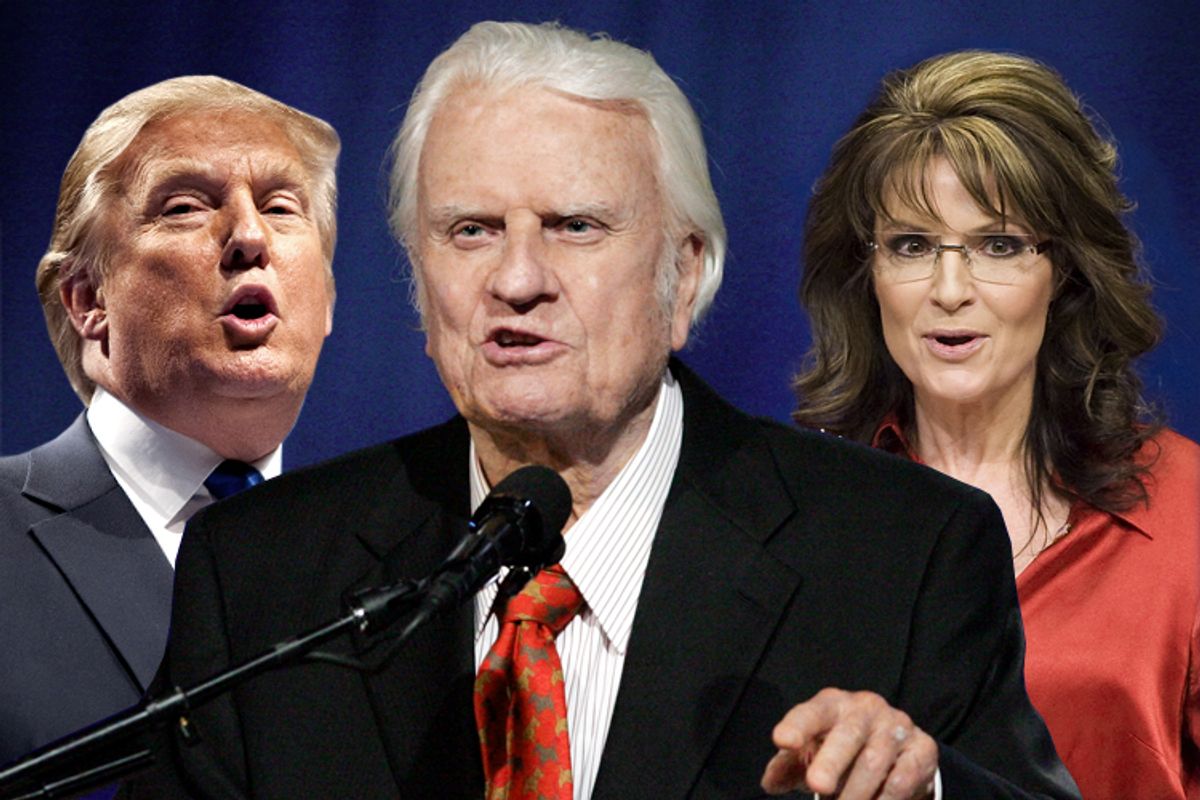 Today, Billy Graham, the man viewed by many as "America's pastor," will commemorate his 95th birthday with a party of 800 guests including Sarah Palin and Donald Trump. He’ll also launch a virtual crusade aimed at the United States and Canada.

This evangelistic campaign titled "My Hope World Evangelism Through Television" began in 2002 with a targeted outreach to 57 countries. Graham, who has not preached in public since 2006 due to advanced Parkinson's disease, managed to tape a brief message that will be part of a 30-minute video message to be broadcast on television and via online media. In what may be his final message to America, Graham employs end times rhetoric and suggests that it's time for America to get ready for Armageddon. He preaches that the Second Coming is “near” and says signs of the end of the age are “converging now for the first time since Jesus made those predictions."

>From 1947 to 2005, Billy Graham Crusades became synonymous with American evangelism. As of 2008, Graham's estimated lifetime audience, including television and radio, topped 2.2 billion. He managed to avoid the televangelist scandals of the 1980s and the outward display of right-wing politics that defined other Southern Baptist preachers like Jerry Falwell. Yet in recent years, while young adults continue to leave behind a church they see as anti-gay, the Billy Graham Evangelical Association began playing an active role in "pro-family" political campaigns. In an era where a slim majority (52 percent) of Americans now support legalizing same-sex marriage in all 50 states, does BGEA's ministry still resonate with an increasingly secularized culture?

Graham rose to international prominence during the Eisenhower era, a time marked by the launch of the National Prayer Breakfast, the insertion of "Under God" into the Pledge of Allegiance, and the inclusion of "In God We Trust" on all U.S. currency. "His appeal is to an older generation who recognize the name. He represents a very simple faith that was for many people in the 20th century very compelling," Randall Balmer, chair of religion at Dartmouth College, said.

In an email interview, Bill Leonard, Dunn professor of Baptist studies and church history, Wake Forest University, expounded on Graham's legacy as an evangelist and adviser to every president from Harry S. Truman to Barack Obama.

I think Billy is the last and the most successful of the Protestant "chaplains" in America. There may be multiple chaplains in contemporary culture, but not with the consensus that Graham developed. He is also perhaps the last of the national revivalists in the U.S. who pioneered evangelical use of media including radio, TV, films and direct mailings.  He generally stayed "on task" with a primarily conversionist/evangelist calling to move persons toward "personal faith in Jesus" but was occasionally distracted by his infatuation with American presidents, most evident in his association with Richard M. Nixon.

During a press conference for his 2005 crusade at Flushing Meadows, Queens, Graham expressed regret for his involvement in partisan politics. However, he never delved into his anti-Communist rhetoric of the 1950s, the specific role he played in engineering the anti-Catholic attacks against John F. Kennedy during the 1960 Kennedy-Nixon presidential campaign or his anti-Semitic comments captured on the now infamous Nixon White House tapes. Also, Graham did not publicly admonish his son Franklin when the younger Graham fueled anti-Islamic sentiment in the days after 9/11 by calling Islam "wicked and violent."

Some the scholars and observers say the tone of Graham's evangelical organization has changed under his son, who became chief executive officer in 2000 and aligns himself politically with religious conservatives. By contrast, Billy Graham grew wary of the religious right in later years as he sought to broaden his reach. However, in a 2012 email interview, Billy Graham's spokesperson A. Larry Ross affirmed that the elder Graham remains in charge.

In 2012, the BGEA lent the name "Billy Graham" to support religious right campaigns including measures against same-sex marriage in North Carolina and Minnesota. (Graham is a native North Carolinian and the BGEA was based in Minneapolis until Franklin moved the operations to North Carolina in 2002.) Also, Graham's endorsement of Mitt Romney was followed by the placement of ads in prominent newspapers encouraging voters to cast their ballots for candidates who would protect the sanctity of life and support the biblical definition of marriage between a man and a woman.

When I asked why Graham would take such politically charged stances at this late juncture in his career, Ross, the spokesman offered this reflection.

Mr. Graham’s message hasn’t changed, but obviously our society and culture have, which is his concern. He expressed support of the traditional family stemming from a moral perspective, which became political the following week after President Obama made his views known the day after the primary.

With most Americans now supporting marriage equality, coupled with the rise of Believe Out Loud and other pro-LGBT Christian groups, Billy Graham and other evangelicals now find themselves out of sync with contemporary culture. Some, like Billy Graham [1],  adopt a hard-line stance calling upon America to repent lest the country be destroyed.

Others such as megachurch pastor Joel Osteen have come to the realization that evangelicals must tone down their views on this topic if they wish to remain relevant. Osteen's message may be more conciliatory than Graham's but he still considers "homosexuality" to be a sin. Sex columnist Dan Savage labels this kinder, gentler approach to LGBT equality as "God Hates Fags with a big smile."

In addition to Graham's seemingly outdated views on human sexuality, Balmer, the Dartmouth professor, added that his students do not recognize the Graham name. Even at a recent event held at Billy Graham's alma mater Wheaton College, only one student recognized the name Billy Graham and the student thought he was a wrestler. A 2005 Gallup poll conducted before Graham's Flushing Meadows Crusade revealed that 45 percent of adults under 30 had never heard of Billy Graham. These students are representative of a growing number of young adults who are leaving evangelicalism, with one in four people ages 18 to 29 listing their religious affiliation as "none."

BGEA says that the “virtual crusade” it is launching is the largest evangelism effort in the history of the organization and that over 24,000 churches are participating. Yet a quick Internet search for news coverage garnered only a few hits as of Nov. 3, 2013.

According to Balmer, Graham has lost much of the cultural currency he once had. "It's hard to see this as anything other than trying to bring the last bit of mileage out of Billy Graham. I think Franklin recognizes that without the imprimatur of his father, he doesn't have much." Barring another miracle, all signs indicate that instead of saving souls in preparation of Armageddon, the BGEA will be the ones left behind. And a major figure’s complex legacy will be tarnished by the current intolerance of the Christian right.

Becky Garrison contributes to a range of outlets including The Washington Post's On Faith column,The Guardian, Religion Dispatches, Free Inquiry, The Humanist, Believe Out Loud, and American Atheist. Her seven books include Roger Williams' Little Book of Virtues, and Red and Blue God, Black and Blue Church.