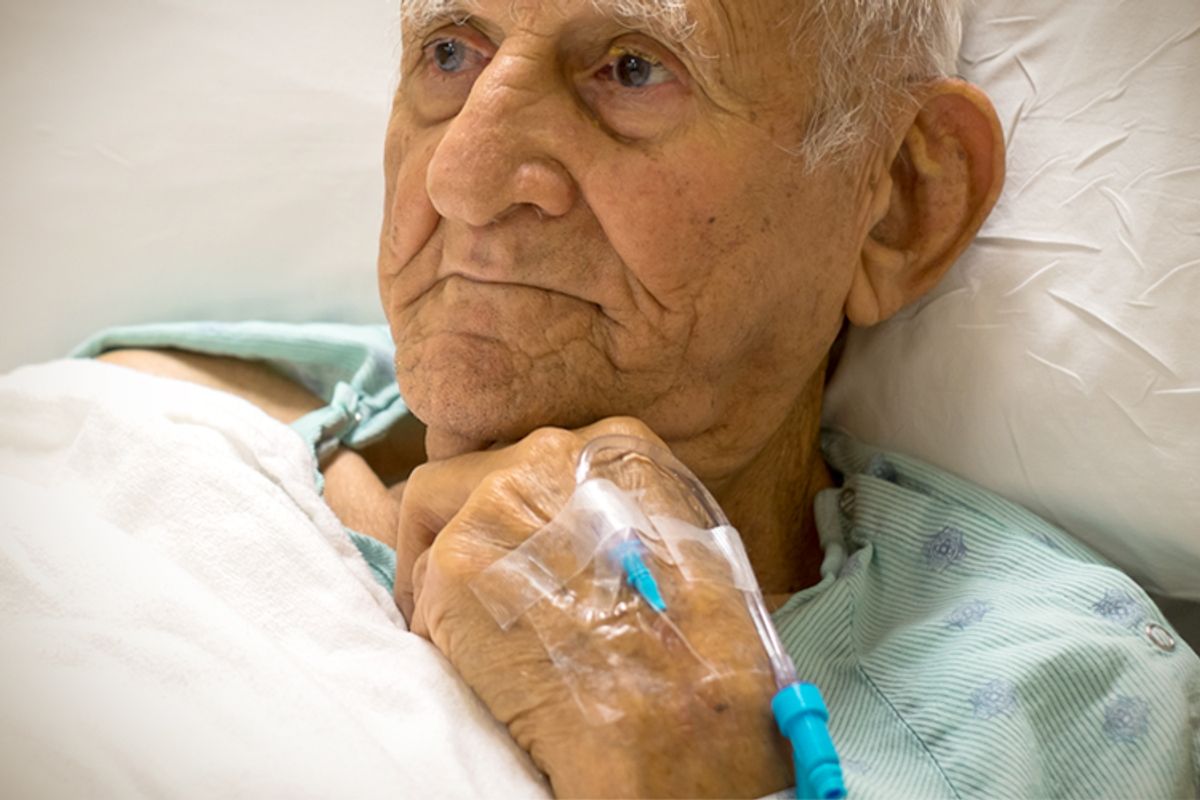 In recent years, demographers and economists have gravely expounded upon the implications of the coming “grey tsunami” – Philip Longman’s colorful term for the aging global population. This phrase conjures up visions of a mounting wave of senior citizens, poised to crash down upon current standards of living and sweep everyone under 65 out to sea, clinging to scraps of their foreclosed-upon homes. The basic premise is this: As the baby boomer generation ages, they will utterly swamp our capacity to provide for them, while mercilessly draining the public coffers. Grey tsunami forecasters assert a connection between the healthcare and deficit crises, channeling fiscal fears into anger at the predicted needs of legions of ill and needy elderly.

As we usher in the first health care enrollments under the new Patient Protection and Affordable Care Act  - popularly known as “Obamacare” – the concern over spiking insurance rates is reaching new heights and generating new fights. A recent study by the conservative Manhattan Institute for Policy Research is typical in laying blame squarely upon the doorstep of the elderly. The study’s “Obamacare Rate Map” forecasts a relentless pressure on our collective pockets from older people. One infographic predicts a 27-year-old Virginian man can expect a 67-percent increase in health insurance costs, even as the average 64-year-old’s rates drop by a comfortable 19 percent. This scapegoating scenario is replicated across the rate map to the same unvarying drumbeat: The elderly are responsible for rising costs and they will not pay their share.

The national uproar over the idea of an individual mandate rests upon a simplistic individualism that asserts the desires of some people – the young and healthy – to be free of insurance, and demands that individual liberties prevail over addressing a shared healthcare crisis that cannot in reality be confined to only one group in society. This obscures the fact that Americans are paying the price for the lifelong effects of poor or absent healthcare options. The American healthcare system is indeed failing, but the origins of that failure are not our seniors, but the inherent and historic deprivations in the way the system is organized.  For example, the U.S. Census Bureau reported in late 2011 that 16.3% of the population lacks health insurance, representing 49.9 million Americans from three main demographics: foreign-born residents who are not U.S. citizens, young adults ages 19 to 25, and poor families with annual household incomes of less than $25,000. Those who are poor are the most likely to fall ill, stay ill and have trouble caring for themselves, whether they are young or old. These are the people who urgently require health care to avoid getting sick and staying that way.

So why blame the elderly? The “grey tsunami” is a simple explanation – too simple. This disaster rhetoric manufactures a singular, tidy demographic upon which to heap our approbation. It also conveniently skips over the burgeoning costs of U.S. healthcare and ignores the moral aspects of the crisis. In the first instance, it should be noted that this demographic bump has actually been moving through the human life cycle for nearly sixty-five years, no rogue wave but a well-documented flood plain we’ve been tracking for decades.

We have had plenty of time to consider the possible implications of the inevitable aging of the baby boomers and respond with appropriate policies before a crisis emerged. Investment in the health of every person would have been a good place to begin.  As research data from our northern neighbors handily proves, the notion that the elderly are inevitable money pits for health dollars is simply not true. Last year the Canadian Institute for Health Information [CIHI] examined thirty-five years of health care costs with a particular focus on aging populations. Like other industrialized countries, Canada is undergoing a demographic shift as boomers enter their senior years. Contrary to the conventional belief that an aging population will overrun hospitals and accelerate growth in health spending, the CIHI reported that elderly-related care actually accounted for a minimal 0.8 percent annual increase in annual costs. An official behind the study, Jean-Marie Berthelot, remarked on how surprisingly marginal the impact of seniors actually is: “Over the past decade, the proportion of health dollars spent on seniors…has remained relatively stable at 44%. This tells us that spending on seniors is not growing faster than spending for the population at large.”

While grey tsunami proponents on this side of the border would have us believe that elderly equals sick (and that this is the primary crisis), Canadians have focused on the real nature of healthcare expenditures. Their data indicates that when people have the resources that allow them to reliably and consistently access preventative care over the course of a lifetime, older adults are healthier and living longer and fuller lives than in the past.

The Canadian policy of providing lifelong health care seems to be working well for people as they age. Data released last year from a national census shows that only a tiny proportion of Canadians aged 65 and over were living in senior-care facilities, indicating that retirees are enjoying decades of good health. Even among seniors in their 90s, over half were living independently. It’s no coincidence that these positive health outcomes are emerging in a country with a functional model for free universal healthcare. Because they have built up resilience over decades with governmental assistance, Canadians are able to limit their vulnerability to illness and disability in old age in a way that many Americans simply cannot.

In addition, the Canadian evidence reveals that while the elderly may indeed avail themselves of their doctors, they are not the endless drain that scaremongers fear. In fact, evidence suggests it is not how old you are but how long you are sick that most impacts healthcare spending. As McMaster University Professor Arthur Sweetman puts it: “The key thing that’s expensive for the health-care system is the years just before you die, and it doesn’t matter if you die at 65 or you die at 95.” Indeed one study of 22 wealthy countries (including the U.S.) actually found population aging negatively correlated with health expenditures.  Instead it was people with debilitating illnesses or injuries – regardless of age – who represented the major expenditures in terms of patient care.

Ultimately, the problem with the grey tsunami thesis is that it simply doesn’t hold water. As we sit on the cusp of a major overhaul in American health care options, we must not let ourselves be swirled away by overblown rhetoric. Even with the modest advances gained in universalizing care, we would be wise to look to places like Canada for our next steps forward. Otherwise, we will fail to address the continued fragmentation and ineffectiveness of a system that inflicts substantial harm both on individuals and the natural ebb and flow of generations.

Martha Albertson Fineman is a Robert W. Woodruff Professor of Law and the Founding Director of the Vulnerability and the Human Condition Initiative at Emory University. She also is an Op Ed Project Public Voices Fellow.

Stu Marvel is a Postdoctoral Fellow with the Vulnerability and the Human Condition Initiative and a citizen of Canada.