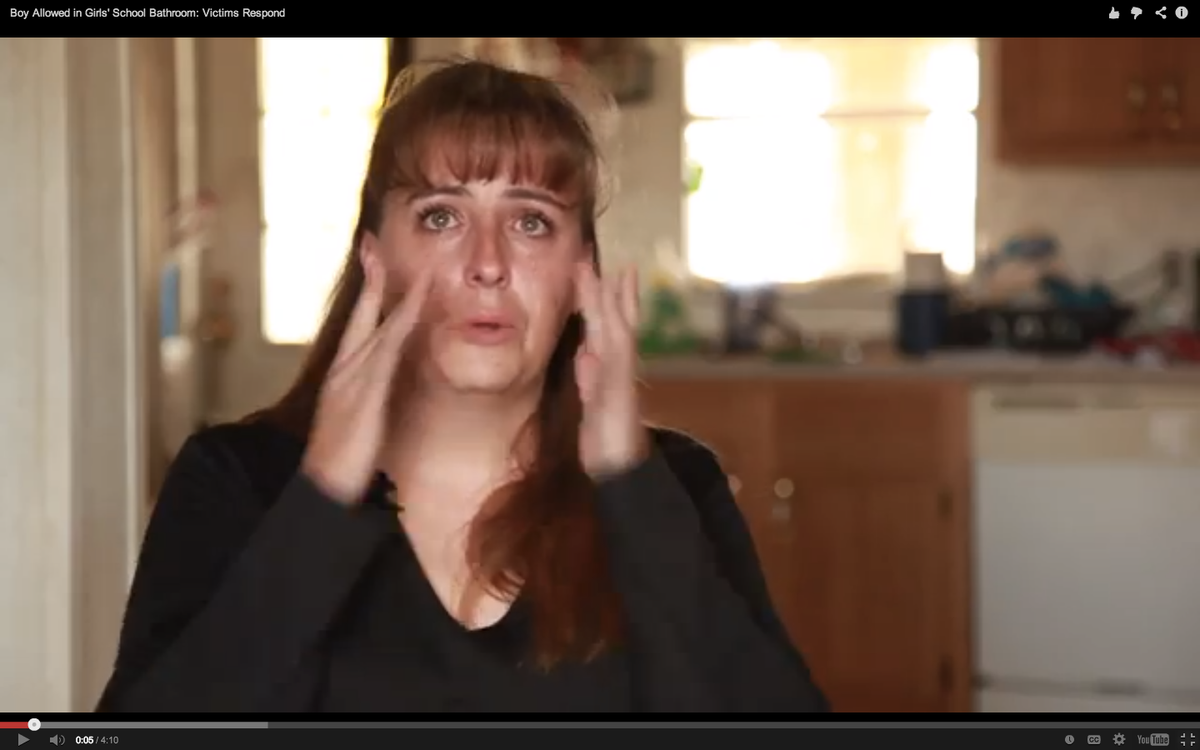 “It kinda makes me nervous... if I run into... him,” stammers a faceless female teen on a YouTube video that has enraged thousands of viewers.

What’s got her so on edge? It’s not threats of stalking. It’s a transgender girl using the bathroom at a public school.

The teen in question, a student at Florence High School in Florence, Colo., recently came under fire from California conservative group Pacific Justice Institute when she received permission from her school to use its women’s facilities.

In October, the group alleged that the the transgender student was harassing other teens, a claim that was resoundingly debunked by news outlets and advocacy groups. But instead of taking back its assertion, Pacific Justice Institute is building on the claim in a new YouTube video that paints the Colorado teen as a predator and her offended fellow students as “victims.”

The video is part of Pacific Justice Institute’s attempt to take action against the so-called “bathroom bill,” a new California law designed to help curb transphobic bullying and harassment by requiring schools to respect a student’s preferred gender identity. The law, which passed in August, allows transgender teens to participate in crossgender activities at public schools, including using bathrooms and showers that correspond to their identified gender.

The law doesn’t take effect until January, but already the backlash is fierce. Pacific Justice Institute views the new law as an invasion of privacy for other teens rather than an attempt to promote equality. “Things are meant to be private and kept for you and only for you,” one student asserts on the group’s recently uploaded YouTube video.

Judging from the response to the video, however, the teens onscreen come across as being the bullies, not the victims. Several of them speak of socially ostracizing the teenager, and one refuses to use the bathroom until she’s in a separate gym class. A parent speaks of having their own rights taken away, while another speaks of protecting his children from the transgender teen the way he would protect them from an electrical outlet.

Referring to the transgender student, one tear-stricken parent asks, “Why can’t we teach him to respect others?”

The rate of attempted suicide among transgender teens is alarmingly high—roughly 25 to 30 percent higher than other at-risk demographics.  "The people who are doing these stories need to realize that the kid behind these stories has feelings and gets hurt,” the mother of the transgender teen reportedly stated. On YouTube, viewers were quick to agree, labeling the video transphobic and misogynist, and urging each other to downvote and report the video for violating YouTube’s policies.