Have we reached peak Claire Danes? 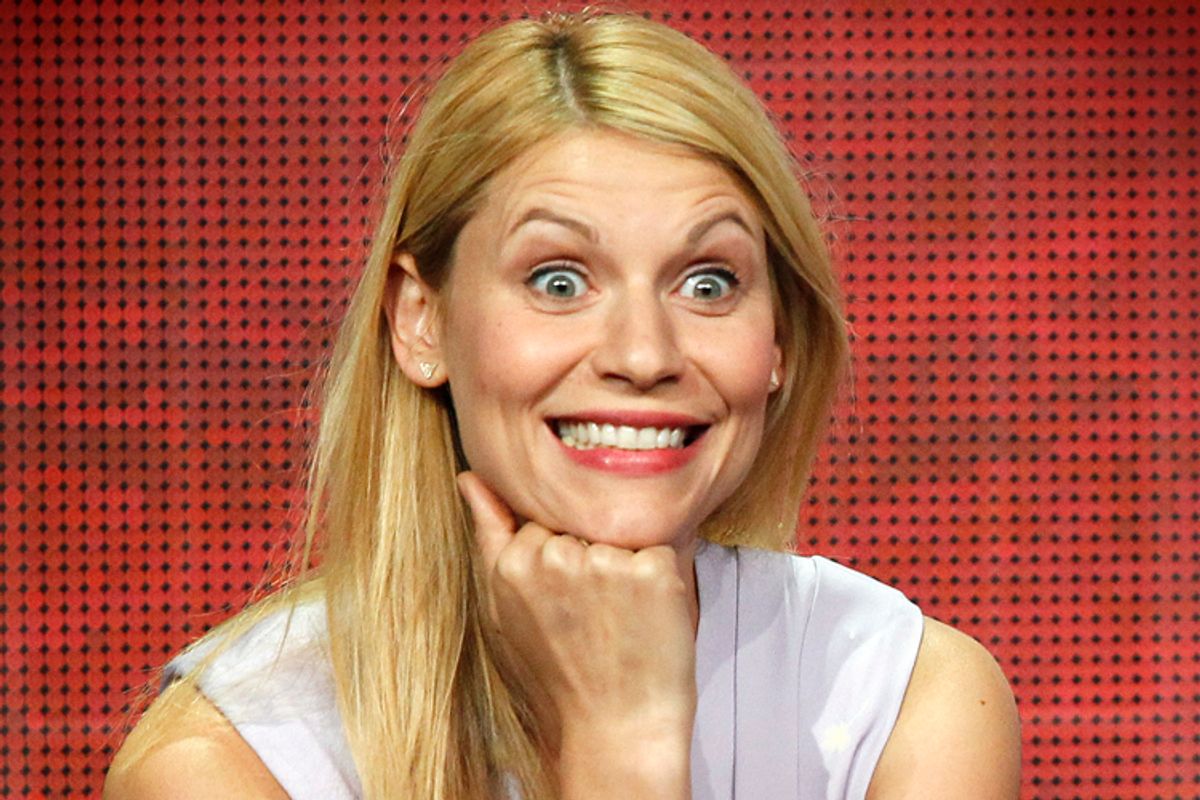 For an overnight success, Claire Danes sure has been at it a long time.

The actress never quite went away -- she worked, if somewhat sporadically, in film throughout the 2000s, and she won her first Emmy for the 2010 HBO movie "Temple Grandin." But upon the launch of "Homeland" in 2011, Danes immediately became the face of one of TV's most acclaimed shows. She picked up a Golden Globe shortly after the first season ended and, months later, another Emmy.

Then came the befuddling second season, which seemed to squander much of the creative energy of the first season. The show was still fun to watch as a soap opera, but its ideas about terrorism and homeland security grew muddled as the show went down dead-end plotlines and strained credulity. No matter -- Danes won another Golden Globe and another Emmy -- her third in four years. In 2013, we have seen Danes cover stories in Elle, Interview and Vogue, as well as a lengthy profile in the New Yorker that framed her as one of the great actresses of her generation.

But the Emmy win felt weirdly deflating, not merely because Danes had been there so recently. It had seemed throughout the Emmy ceremony that the trophy might well go to Kerry Washington on "Scandal," an actress who was subject to a lengthy testimonial by Diahann Carroll onstage and whose show -- explicitly a soap opera, with no greater goal in terms of driving the conversation around politics but keeping the viewer agog -- has the heat right now. Even at its worst, "Homeland" has kept Danes' legitimately astounding performance front-and-center, and Danes "deserved" the trophy, as much as anyone does, for her performance, a fierce and terrifying one. But it felt strange to reward "Homeland" at all. As Danes' star has continued to ascend, her show has deflated.

But with last week's revelation that -- spoiler ahead -- her character is pregnant, and may or may not be so by her on-the-run paramour, and has or has not been dosing herself with alcohol throughout the pregnancy, it seems as though the show is taking Danes down with it. Danes' character is lost amid the show's attempt to be both serious-minded about the CIA and loopy fun with soap elements; in Season 1, she was a flawed but fundamentally competent CIA agent (her flaws, indeed, were what made her competent). Now she's just in free fall.

After a certain point, which may already have been reached, it'll be impossible to understand Danes' performance, because the plot elements to which she'll be responding are incomprehensible enough to render her not a character but an assemblage of plot devices. What does that mean for Danes?

History is littered with actors whose shows, to which they were contractually bound long after relevance passed them by, let them down. Hugh Laurie was once a major TV star on the back of "House"; Blake Lively, who's spent her post-"Gossip Girl" period positioning herself as a homemaking guru, as the show deflated. Felicity Huffman won an Emmy for the first season of "Desperate Housewives"; by the eighth, it felt weird when she showed up to present at award shows.

It's the natural order; there's always a newer, hotter show on the horizon. But "Homeland" has enacted the process of show collapse in shorter order than most, and before a period of dormancy for its star. Danes has until this very moment been praised wildly for her work on the show; will such praise not fade out but switch off? It's hard to imagine Anna Wintour giving the Vogue cover to the star of a show whose fans aren't just spurious but have entirely abandoned it, as has begun to happen.

The Golden Globes are in a couple of short months, by which point the benighted third season of "Homeland" will have wound down. If Danes doesn't win, as seems likely, it'll be the end of a brief era during which Danes couldn't stop winning for a show that couldn't rise to her level. The worst part of it is that Danes can't do much about it but continue to be her best on the show -- one that proves, again and again, how unworthy it is of her talents.