How black girls die in America: The outrage of the Renisha McBride shooting

In the wake of senseless deaths, do we raise a generation of black children to be paranoid? Do we dare not to? 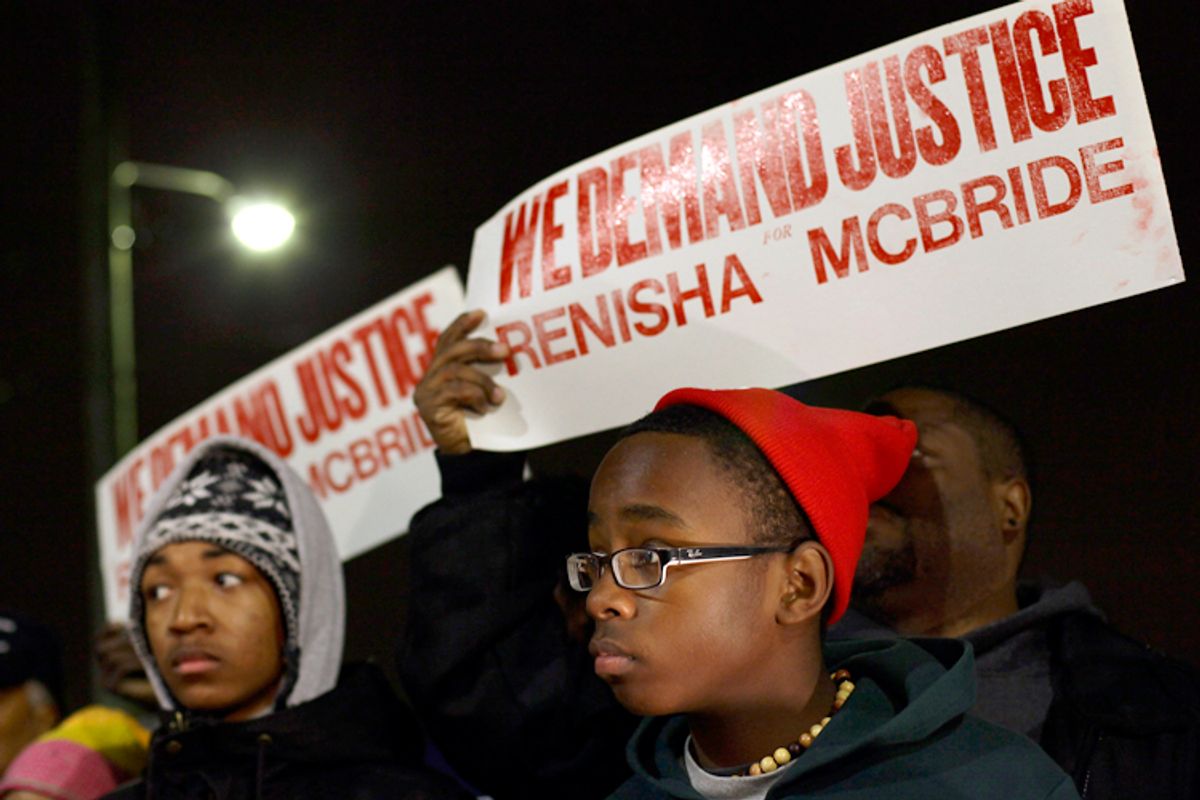 Seven-year-old Aiyana Stanley-Jones was shot and killed during a police raid in Detroit in May 2010. In an article about the incident, Charlie LeDuff spoke to Chief Medical Examiner Cal Schmidt who said, “You might say that the homicide of Aiyana is the natural conclusion to the disease from which she suffered … The psychopathology of growing up in Detroit. Some people are doomed from birth because their environment is so toxic.”

This is how we think about Detroit, the once grand city that has fallen into urban decay, abandoned and given over to violence, a city so toxic that even when a 7-year-old girl dies from a gunshot wound, her cause of death is not the bullet.

Renisha McBride was 19. She was involved in a car accident and went to a house, seeking help. It was the middle of the night. She was shot in the head by a white man with a 12-gauge shotgun. He has not been arrested because, like Florida, Michigan is a “stand your ground” state.

Meanwhile, in Florida, George Zimmerman was acquitted for the murder of Trayvon Martin, who was 17. Zimmerman’s defense team successfully used the “stand your ground” law to absolve their client in the eyes of the law.

Apparently "stand your ground" is only successfully invoked when people stand their ground against unarmed black teenagers.

Increasingly, we are faced with a horrifying truth. The environment in the United States is toxic for black people. There are exceptions, certainly, but Aiyana Stanley-Jones was murdered in her own home, by law enforcement. Trayvon Martin was murdered while walking home from a convenience store. Renisha McBride thought, like any reasonable person, that she could ask a stranger for help.

I want to be able to say something meaningful about all this but these are circumstances beyond words. These incidents, and so many others, are painful reminders about the value of black life. How do we bring black children into this world? How do we prepare them for a reality where they are in danger in their own homes, and when walking home from the store, and when driving, and when walking through the streets of New York, and when trying to ask for help? Do we raise a generation of children to be fearful and paranoid? Do we dare not to?

Last night, near midnight, I was driving out of the airport in South Florida when I came upon two cars — a minivan flipped over, mangled, and a truck on the median, the hood crushed, smoke filling the cab interior — the immediate aftermath of an accident.  There was gas pooling in front of the minivan. A young black man in the car ahead of me pulled over and ran to help. He started shouting, “Help me. I need help to get this man out of this car.” I paused for a moment, trying to make sense of the scene, then pulled my rental car over. There was an older white man trapped, bleeding, talking — clearly in shock but lucid enough. He kept saying, “It wasn’t my fault.” The other driver stood, mutely, next to his truck. I think he was in shock, too. Three other cars stopped. Two of the young women who came to help were nurses — one white and one Latina. We needed a knife because the trapped man couldn’t unbuckle his seat belt. One of the young women asked her boyfriend, a tall, rangy guy sporting a mullet if he had his knife and he did. He ran to his truck to get it.

Several of us had called 911 and most of us were put on hold. Having watched a great deal of televised medical drama, I offered that perhaps we shouldn’t move the guy because of potential neck and spinal injuries, but one of the nurses explained something about all the blood rushing to the guy’s head and said other smart-sounding medical things. Before long, the tall, rangy guy was using his knife to cut through the seat belt. One of the nurses was telling the trapped guy, “Just breathe, honey.” A couple of us were holding the guy in place so he wouldn’t fall in on himself when he was finally cut free. A police officer finally showed up and took the lead. A group of us pulled the guy free and helped him to the curb. He said, “I’m fine, I’m fine.” He wasn’t. There was a huge gash on his forearm. His head was bleeding. The officer said, “I believe you are but why don’t you just sit here until the paramedics get here?” The nurses tended to him as best they could while we waited.

For a while after the man was free, we just stood around, the adrenaline ebbing. More police showed up, as did the paramedics. I noticed that we were a group of people of different races and ethnicities but we were also human. Individually, we saw someone who needed help and individually we stopped and together we helped. In the wake of so much terrible news, I needed that reminder that people can be as good as they are terrible. And still, all I know today is that a young woman is dead. Her name is Renisha McBride. May her name forever be on our lips. May outrage over her senseless death be forever in our hearts.