How much will it cost to make these racist old men go away?

Getting Richard Cohen and Ray Kelly out of public life might cost some money, but it's worth it 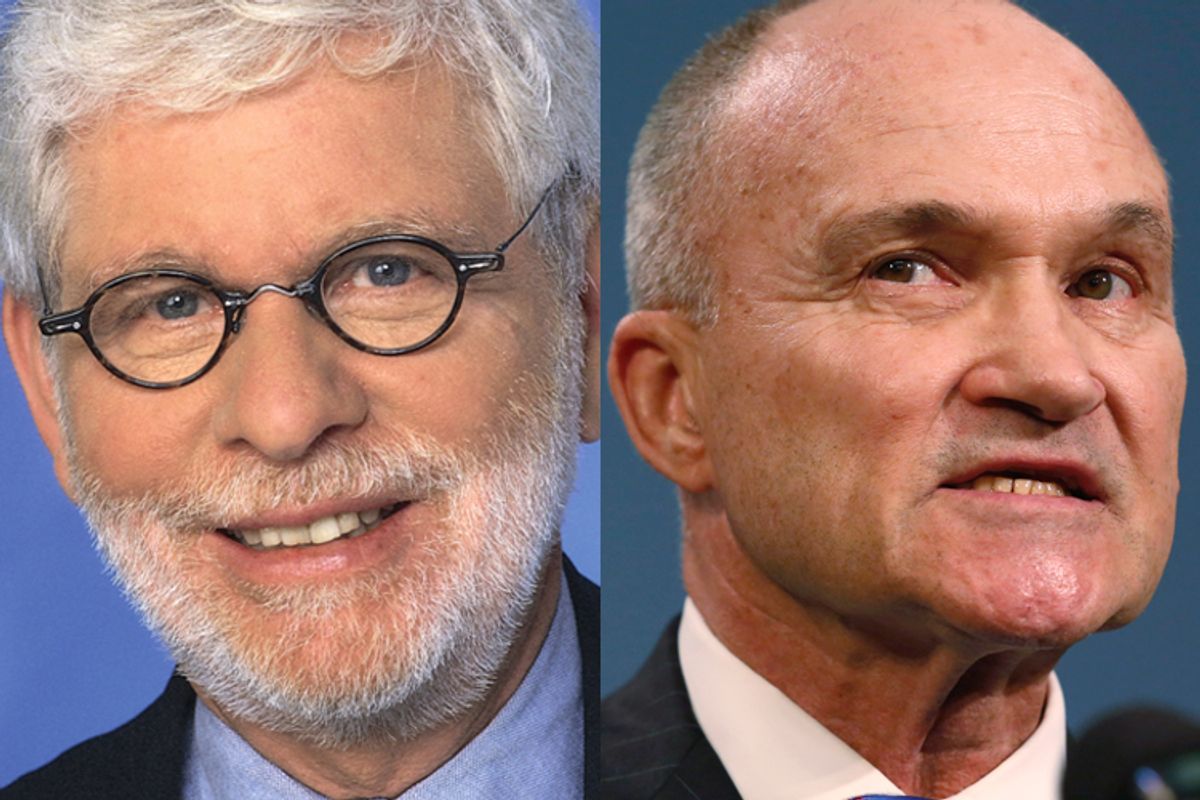 One of America's foremost problems is that old racist white men are still a very powerful and entrenched force, and as they get older, they are only getting madder and more racist. They do not seem to have much of a desire to simply go away on their own. In some cases, as distasteful as it will be, we will have to give them an incentive. Today, I will examine two of those cases, and try to determine what it will take to get rid of Richard Cohen and Ray Kelly.

There is a sort of general Internet consensus, I think, that the Atlantic's Ta-Nehisi Coates is the best. He is the most thoughtful, the most incisive, the most honest, the rightest commentator we have. The Washington Post's Richard Cohen is the opposite of Ta-Nehisi Coates. When the Eternal Gamer was deciding on the Madden player ratings for American current events columnists, he gave Cohen zeroes for insight and maxed him out on laziness and incuriosity. That is why it was a bit alarming, but not particularly surprising, to see Cohen write this, this week: (Emphasis mine.)

I sometimes think I have spent years unlearning what I learned earlier in my life. For instance, it was not George A. Custer who was attacked at the Little Bighorn. It was Custer — in a bad career move — who attacked the Indians. Much more important, slavery was not a benign institution in which mostly benevolent whites owned innocent and grateful blacks. Slavery was a lifetime’s condemnation to an often violent hell in which people were deprived of life, liberty and, too often, their own children. Happiness could not be pursued after that.

Yes, Richard Cohen, a journalist and columnist for nearly half a century, a college-educated, award-winning commentator, thought slavery was not such a bad thing until he saw a movie about it in 2013. Richard Cohen admits, in a major American newspaper, that until this month, he believed an archaic, widely discredited "Lost Cause" white supremacist myth. And in his nearly 70 years of literacy, he has not seen or heard or read anything to challenge that myth until he saw a Hollywood film on the subject. This is ignorance on a staggering scale. That paragraph should only preface a retirement announcement. "I am a deeply ignorant and cloistered old man," should be the next sentence, "and no one should pay me for my views and opinions, because they are worthless."

This is not the first time that Richard Cohen has written of how he learned the lesson that black people are humans deserving of empathy! In 1986, Cohen wrote a magazine column defending racist treatment of black men in stores. Two years later, he wrote a column in which he acknowledged that he was wrong. He came to this realization when he went to Atlanta and met, and saw, and interacted with black people of means.

His critics were "mostly right," he acknowledged. Once again, the veil of purposeful, inexcusable ignorance was lifted from Cohen's eyes. And do you know what happened next? He reattached the veil. By 2013, he was once again a dedicated defender of racial profiling, once again justifying it by reducing black people to statistics and threats. He wrote: "The numbers are proof not of racism but of a lamentable fact: Black and Hispanic men are disproportionately stopped because they are disproportionally the perpetrators of gun crime." He wrote: "I also can understand why Zimmerman was suspicious and why he thought Martin was wearing a uniform we all recognize." Perhaps, given another decade or so, Cohen will also return to believing that slavery was a benign institution.

Over the last few years, the Washington Post has attempted to cut costs by offering certain employees buyouts, essentially paying them to retire early or leave for other work. For some bizarre reason, the Post's opinion section has been entirely shielded from these buyouts. Last year the paper bought out nearly 50 people. Many of them were actual reporters, including investigative reporters. Many of them were people of color. Not a single one was an opinion columnist.

This Richard Cohen column -- and perhaps all Richard Cohen columns -- should be read as a memo to Jeff Bezos, the new owner of the Post. Cohen is saying, perhaps subconsciously, that he has nothing to offer the Washington Post. He adds no value. "Buy me out," Richard Cohen begs, between the lines. "Pay me to go away and stop embarrassing this once respected newspaper." How much will it take? I am not sure, but Jeff Bezos is a very rich man, and I think he can afford it. Indeed, if his mission is to invest in quality journalism, paying Richard Cohen to go away would be one of the quickest and simplest ways to advance that mission.

Meanwhile, in New York City, we have the case of a man who is being forced to go away regardless, but who still wants it to cost us a bit of money. Mayor-elect Bill de Blasio campaigned in part on a promise to remove Police Commissioner Ray Kelly. Kelly has been the commissioner since 2002. Under his tenure, the NYPD has been waging a massive campaign of institutionalized racial profiling. The campaign is referred to as "stop-and-frisk," and it relies on the sort of assumptions that guide an ignorant man like Richard Cohen. It assumes people of color -- primarily young black men -- are inherently suspicious, and treats them as de facto criminals, or criminals-to-be. The NYPD's primary crime-fighting strategy has been to get young black men "into the system," to have them registered and fingerprinted, under the assumption that they will eventually be suspects.

Kelly is the pioneer and fiercest advocate of this approach to policing. He insists that New York City's current historically low crime rate proves its efficacy, though falling violent crime rates are a national trend, and New York's rate has fallen more slowly under his tenure than it did in the decade before Bloomberg took office. But he merely uses numbers and statistics to convince people of what he wants to believe: That racial profiling is necessary. The Richard Cohens of the world will say this explicitly. The Kellys have to insist that they oppose profiling as they argue for its efficacy. The difference between the two is that Cohen only has the ability to impose psychic misery on Americans of color, while Kelly is directly responsible for the harassment and alienation of countless real people.

Kelly is on his way out, as I said. I have little doubt that he'd happily serve as commissioner for life, under Mayor-for-life Michael Bloomberg. But that is not to be. The next best option is to cash in. This is why he's being considered for a job at JPMorgan Chase, America's largest megabank and criminal organization."Sources familiar with the situation," the New York Post reports, "said Kelly’s position could include a seven-figure salary and bonuses." Not bad! And if it keeps him off the streets, fine, let Kelly take this job guarding money.

But Kelly wants just a bit more, and he'd like New York to pay for it. He would also like, according to DNA Info, a city-funded six-man personal security team to guard him and his family. That means six NYPD detectives, making $120,000 a year. That adds up to $720,000 a year. Kelly is friends with some of the richest people in the country, including the outgoing mayor, who will be paying for his own security, and Kelly also seems likely to take a lucrative private sector job, but he would still like New York City taxpayers to pay to keep him safe. As happy as I am to see him go away, I don't think that's worth it.