Lorde's putdown feminism: The politics of calling out other women 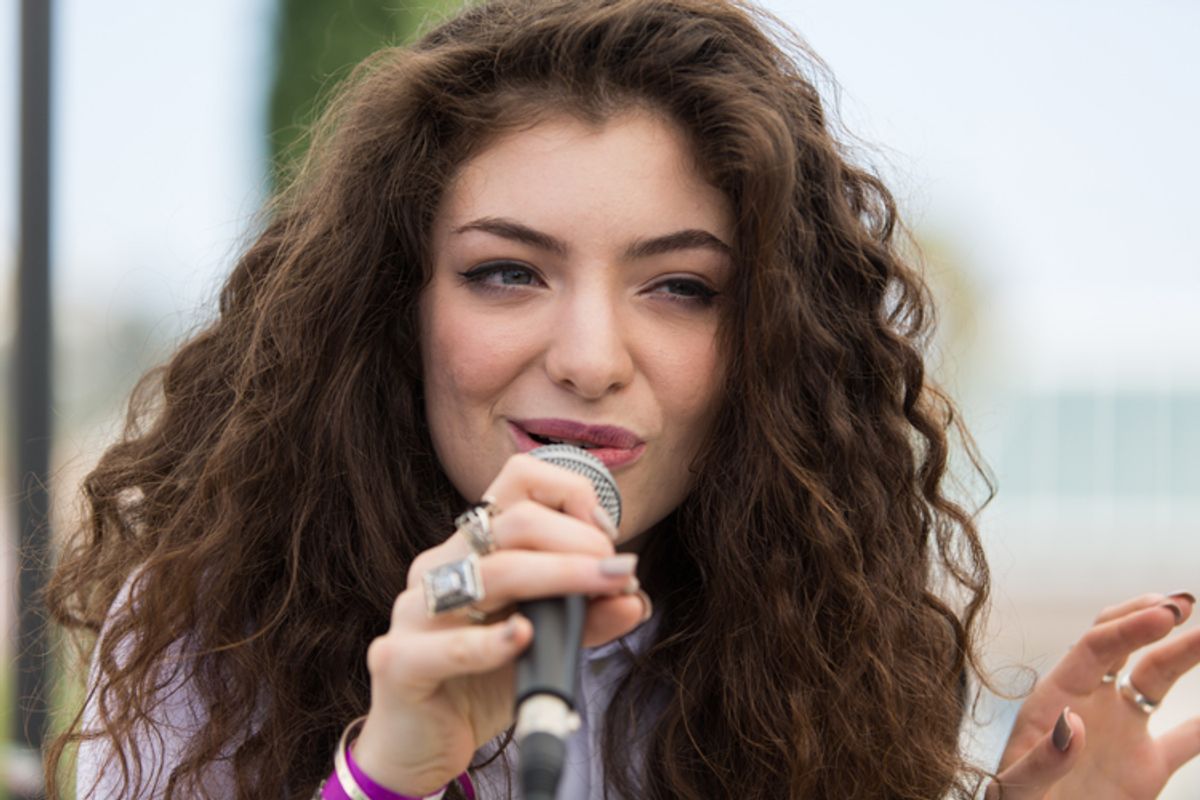 There’s something incredibly refreshing about Lorde, the 16-year-old pop singer whose debut song, “Royals,” is currently dominating the American charts. Most celebrities’ images feel calculated and studied, as if they were constantly auditioning for a pageant, but Lorde is a girl who is willing to speak her mind. She will say anything and doesn’t seem to care much what you think.

BuzzFeed highlighted the singer’s penchant for brutal honesty in a post about the singer’s statements on other pop stars. The post quickly went viral simply because Lorde is saying the things that many of us wish we could say on a public stage -- particularly about Beyoncé, who Lorde believes is a “goddess” and the “epitome of poise and grace.” Glad to see we’re on the same page, Lorde.

But most of Lorde’s statements are clever put-downs of her contemporaries -- in a way that music listeners are highly familiar with. Part of selling yourself as a musician is proving you’re the best, which is why rappers like Kanye, Jay Z or Eminem will regularly dis other performers in their music. Referring to a beef that the rapper had with Moby, Eminem sang in “Without Me”: “Moby, you can get stoned by Obie.”

Even Madonna got into the game with her 2012 single, “Give Me All Your Lovin.’” While cleverly dressed up as a love song, the tune was actually a put-down track aimed at the new generation of pop divas, like Lady Gaga and Katy Perry. Madonna put them in their place: “I'm a different kind of girl/Every record sounds the same/You've got to step into my world.”

And that’s, in its essence, what “Royals” is: a dis track aimed at recognizable popular music tropes and the singers who rely on them. A lot of attention has been paid to the fact that Lorde attacks Cristal and jet planes, but to me, that’s less about rap than about other pop stars. These days, you’re just as likely to find Perry or Ke$ha rocking grills or bling as anyone else (though pop's appropriation of hip-hop style carries its own issues). The inclusion of ball gowns and smashing hotel rooms particularly suggests a broader pop critique.

Like Madonna, Lorde’s targeting her competition: Selena Gomez, Taylor Swift, Lana Del Rey and Miley Cyrus. She wants to prove that she’s the alpha female in the room. She’s showing why she deserves to be on top and how she’s playing the game differently. It’s a trick as old as music, and besides, who hasn’t criticized Taylor Swift by now?

However, what’s odd is that she’s framing it through a social justice lens. When she’s putting down Justin Bieber or David Guetta, she’s putting down their work, which leaves much to be desired. But in the cases of Del Rey or Swift, she’s putting them down as singers -- and women. Lorde specifically criticizes the lyrics of Gomez’s “Come and Get It." Gomez sings, "When you're ready come and get it," and this line seems to suggest enthusiastic consent. But "as a feminist," Lorde argues that she’s "sick of women being portrayed this way."

There's nothing wrong with Lorde speaking her mind, but the put-down culture she’s prescribing may not be as progressive as she thinks. Lorde seems to believe that she’s critiquing the system to further enlightenment and empowerment, but she's also supporting a system where we shame everyone for not doing it our way.

We have a choice here. We can obsessively criticize until our faces turn blue and the Internet becomes nothing but an echo chamber of easy hatred. Or we can examine the struggles that others face -- whether as women, people of color, queer people, and/or any other non-dominant group. It doesn’t get better just by attacking Selena Gomez, who may have her own opinions on how she operates as a feminist.

In a post-"Mean Girls" era, people seem to have gotten the message that continually shit-talking women is bad, so the modern way to do that is to show how those women are setting a bad example for society. You’re attacking Lana Del Rey not out of misogyny but out of love. You just want to educate her.

The New Enlightened Male has a particularly bad habit of this, highlighting the flaws in particular women to make them into a cautionary tale. He’ll say he’s doing it “as a feminist.” Recently photos of Renée Zellweger leaked with new plastic surgery, and a dude friend commented on how badly it had ravaged her looks. “She’s practically unrecognizable,” he said. “It’s so sad and sends such a bad message about aging.”

Zellweger, like many other famous women, has faced an enormous amount of pressure to look a certain way in order to fit into a brand of success. The struggle has clearly taken a toll on the actress, just as it did Mila Kunis while filming Black Swan. Kunis recently claimed that she might have looked great on the screen, but in real life, she felt like “skin and bones.” I think it’s criminal that anyone would be expected to starve themselves to be beautiful, but it doesn’t help to blame those who face that expectation.

I sat next to a man on the train the other day who grilled a woman wearing a Muslim headscarf, telling her how “subjugated” she was. The woman didn’t have to be kind to him -- but she was. She explained that it was her own religious choice, and as a feminist, she doesn’t believe other women have to make the same decision. They don’t even have to agree with hers. It’s every person’s right to choose their own path to liberation.

The man looked confused by her answer, as if he couldn’t process it. So rather than engaging with the woman, he reaffirmed his previous point: “But you’re subjugated.”

I sat as their conversation went on and on, getting nowhere, and I realized it would continue to do so as long as he kept on trying to tear her down. He just wanted to prove he was right. His goal was to overpower her with his honesty -- much like Lorde, who just wants to help us all by saying what’s on her mind. Honesty is important, but the more crucial step is empathy. If that guy just stopped criticizing the woman in front of him for a moment and listened, he might actually have learned something. We all might.