Is New York now for businessmen only? 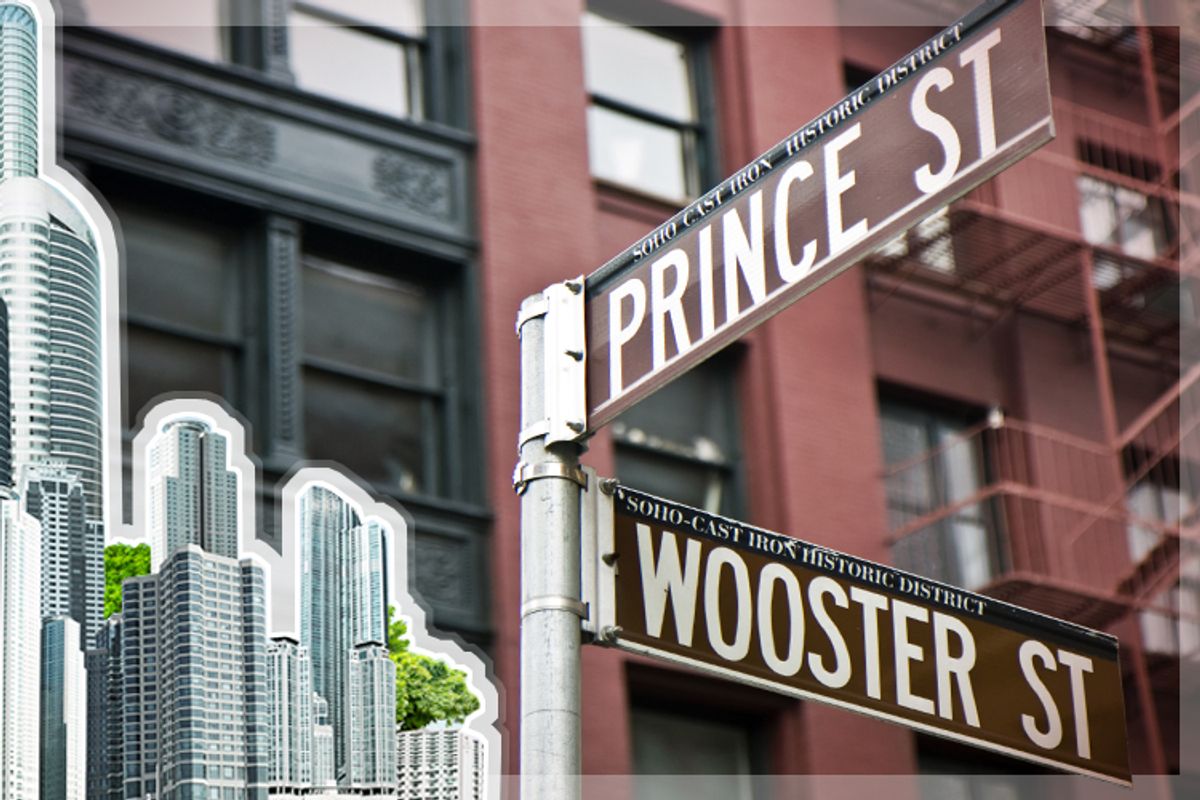 On Oct. 23, Michael Bloomberg signed a law establishing New York City’s 68th Business Improvement District. A localized, public-private partnership that allows property owners to take responsibility for nearby public improvements, the BID is tailor-made for the business-knows-best ethos of the Bloomberg era. Breaking with the policy of his predecessor, Rudy Giuliani, Bloomberg set out to encourage the growth of BIDs from the start of his first term, and after 12 years, he has overseen the formation of 24 BIDs — a clip of two per year, this over a period of financial panic.

The location of this latest Business Improvement District, however, may strike outside observers as redundant. It’s in SoHo, a repurposed manufacturing district famous for many things — distinctive cast-iron facades, airy lofts, a trend-setting acronym — but perhaps most of all for its recent renown as a global shopping mecca. The six blocks of Broadway that make up the new SoHo BID are home to 130 retailers, including Prada, Bloomingdale’s and Topshop, who pay some of the highest commercial rents in the world. A two-story building with 50 feet of frontage on Broadway sold for $150 million last year. Briefly, it does not seem like a neighborhood in need of business improvement.

But many local property owners, both residential and commercial, see it differently. They claim a BID is the only way to save this stretch of Broadway from the surfeits of its success — garbage, traffic, sidewalks overrun with hawkers. They say a BID doesn’t need to be about "business improvement" so much as effective neighborhood governance. To prove its good intentions to a neighborhood whose opposition nearly brought the rubber-stamp BID formation process to a halt, the SoHo BID has extended an olive branch: Its board will be composed half of commercial property owners and half of residents.

It’s a first for New York, a victory for SoHo residents and a change that moves the BID model a step closer to accountable neighborhood governance. But for opponents of the BID model at large, it sends a worrying message: BIDs aren’t just for businesses anymore.

Anatomy of a BID

Here’s how a BID works. Over a geographically defined area — a six-block stretch, in SoHo, or the 70 square blocks of the Grand Central Partnership, in Midtown — the city collects a supplementary tax to fund the BID’s operating budget. A board of directors, consisting largely of commercial property owners (the law requires the board include one tenant, commercial or otherwise), commits that money to public amenities and services ranging from tulips to security forces.

BIDs in New York City have expansive powers. A BID may build parks, pedestrian overpasses, pedestrian malls, garages and kiosks; install display cases, street furniture, fountains and landscaping; and close, open, widen or narrow existing streets. It may permit commercial and private use of public space at will. Its private security forces patrol city streets. And it is semi-permanent: No BID in New York City has ever voluntarily disbanded.

The efforts of BIDs to revitalize New York’s once-derelict public spaces and advocate for local businesses have generally been celebrated. While not the first city to adopt the model (Toronto and New Orleans formed BIDs in the early 1970s), New York has more BIDs than any other city. Organizations like the Union Square and Bryant Park BIDs are considered paradigms for transforming their respective parks into some of New York’s most pleasant.

Still, as an arm of government closely controlled by business powers, the BID has spawned controversy and drawn the suspicions of urban theorists and neighborhood activists. How much power can an unelected body have over public space? In 1997, at the height of the BID controversy — the Grand Central Partnership had recently been accused of hiring “goon squads” to beat up the area’s homeless population, and would soon be (temporarily) dissolved by Giuliani — two residents sued the GCP, alleging its corporate governance violated the “one person, one vote” doctrine of American constitutional law. Though residential tenants outnumbered corporate entities by 4-to1 in the GCP’s territory, the BID board consisted of 31 members elected by property owners, 16 elected by commercial tenants, and just one representing renters. A court ruled in favor of the BID, arguing that the organization’s powers, despite an annual budget of $12 million, were not sufficient to constitute a “government body” and could not “meaningfully alter the conduct of persons present in the district.”

But even minute changes to public space have outsize resonance with New Yorkers (see: Citibike, pedestrian plazas, bike lanes), and in SoHo, enabling a corporate board to take control of Broadway was seen as an injustice. (I am not an outside observer: I was raised along the stretch of Broadway in question, and my family still lives there. I’ve closely watched the SoHo BID proposal move through public meetings and the like, at once eager to see its firepower deployed on behalf of the neighborhood and wary of the changes it might bring.)

Three years ago, when the BID was first proposed, it seemed unlikely that businesses and residents would find common ground. The initial BID budget, submitted to the local community board, included provisions for holiday lighting, public safety and visitor services, improvements residents associated with suburban malls. It allocated $50,000 for marketing, promotion and advertising. “You really think you need to market SoHo?” recalled Pete Davies, a Broadway resident opposed to the BID. “Everyone understood that was ludicrous.” Subsequent budgets toned down the BID’s mission, but residents remained suspicious of the organization’s intents, and still felt they were writing “a blank check.” Hundreds turned out to raucous community meetings in protest.

Looking back, they say the deck was stacked in the BID’s favor. “It was skewed toward getting it enacted,” says Sean Sweeney, the SoHo activist. “You had to jump through burning hoops backward with weights on your legs to get it stopped.” The relevant council member, Margaret Chin, approved the BID over the objections of the community board, despite her previous assurances to the contrary. SoHo’s State Assembly member and state Ssenator both opposed the BID. It was approved by the City Planning Commission with just 55 percent support of “assessed value property owners” — a metric that gives greater weight to more valuable properties than less. The law’s sponsor in the City Council was Coney Island Councilman Domenic Recchia, whom regular readers may remember as a close friend of the Coney Island plunderer Joe Sitt, who owns eight buildings along this stretch of Broadway. The BID process is evidently not designed to accommodate disagreement.

But that’s only half the story. In the end, residents managed to score what struck organizers as a sweet deal: halfway control over a board (Chin’s insistence) that will manage a half-million dollars, largely from commercial owners; assurances of no commercial activity on streets or sidewalks; and a focus limited to sidewalk sweeping, congestion and vendor control.

“It’s a little imbalanced given that more than 80 percent of the space is commercial, and that taxes paid are really by commercial properties,” says Brian Steinwurtzel, a co-chair of the BID steering committee whose family owns two buildings on Broadway. “But it’s more important to have these services performed than not.”

Big, commercial properties pay most of the taxes, and yet share decision power with local residents? The mission is not marketing, lighting or street fairs but basic neighborhood functions like traffic control, police work and trash pickup? The SoHo BID sounds less and less like the BIDs of yore … and more like the skeletal framework of neighborhood government.

It’s a notion that organizers have been eager to promote. “Don’t let the name ‘Business Improvement District’ lead you astray!” the BID’s website proclaims. “It’s a bad name that didn’t speak to what they were doing,” insists Emily Hellstrom, a Broadway resident and co-chair of the BID steering committee. “There was a lot of initial mistrust just because of the name of the thing.” Barbara Cohen, the consultant on the project, says it is “unprecedented,” and a model for a mixed-use neighborhood BID.

Critics like Davies remain skeptical. “What’s actually going to happen? We don’t know.” The BID, he maintains, is fundamentally designed for business interests. “There is no ‘neighborhood improvement district,’” he said, referring to the law. “I don’t think you can get around the fact that the interests of businesses and residents can be in conflict.”

Yet opponents of the BID looking at SoHo should fear not corporate control over public space — that is par for the course — but the emergence of a more balanced governing force. The real threat that BIDs pose to the city stems not from their undemocratic nature but from the creation of enclaves where the provision of services is determined by local wealth. In the long run, the pessimistic thinking goes, property owners in these neighborhoods will cease to advocate for better public services, because they no longer need them.

Over 3,600 New York City block faces are included in a Business Improvement District — an area about six times the size of Central Park. Is SoHo a blueprint for a new type of expansion?