“We have a radical philosophy:" The right-wing plot to stop the public option

Behind the scenes as the Koch Brothers, Sarah Palin and Fox News fought to defeat progressive health care reform 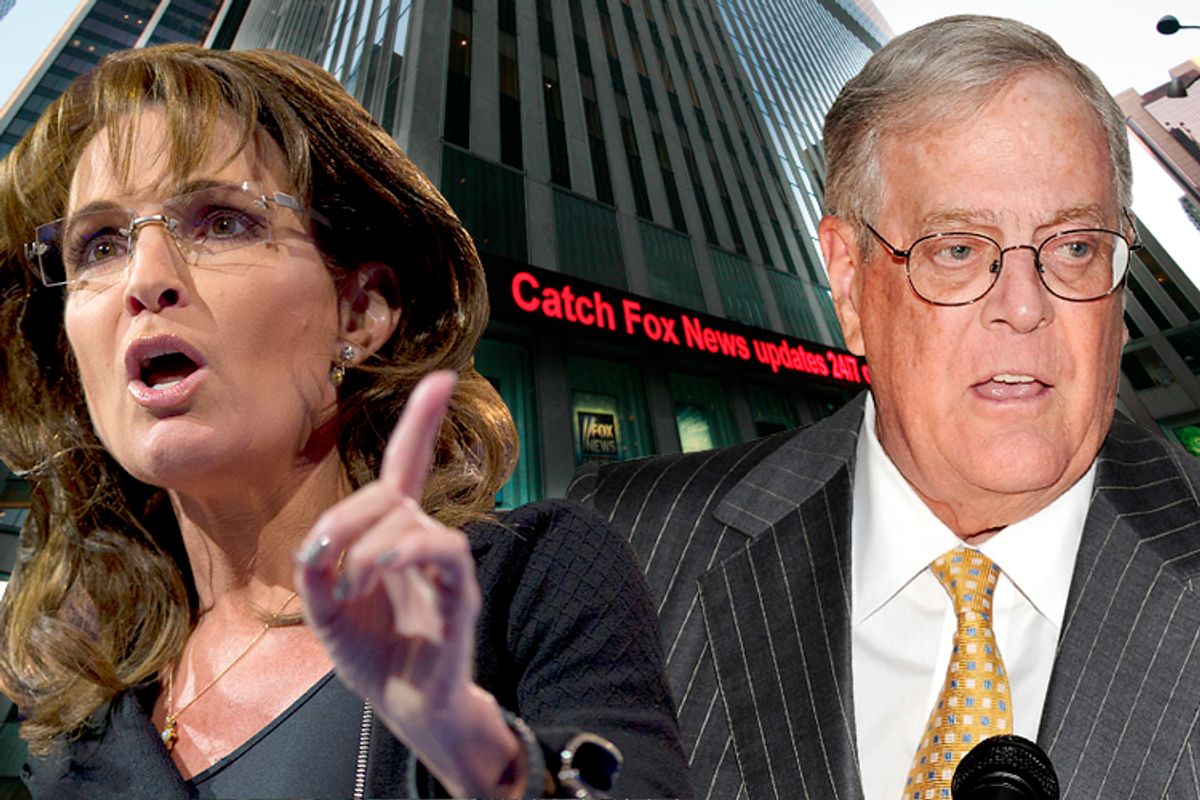 The Rise of the Kochtopus

The Koch Brothers have been behind mind-boggling amounts of political spending.

Koch Industries itself has spent more than $50 million lobbying since 1998. But Jane Mayer, with The New Yorker, cautions, “Only the Kochs know precisely how much they have spent on politics.”

According to tax records, between 1998 and 2008, the Kochs have funneled hundreds of millions of dollars through charitable organizations, with much of that money winding up in the hands of political organizations, too.

Mayer writes, “The three main Koch family foundations gave money to thirty-four political and policy organizations, three of which they founded, and several of which they direct. The Kochs and their company have given additional millions to political campaigns, advocacy groups, and lobbyists.”

The National Committee for Responsive Philanthropy produced a report in 2004 questioning the charitable nature of the Kochs’ donations. Their report concludes that the Kochs aren’t actually making charitable contributions; they’re making investments in ideas that will eventually lead to higher profits. According to the report, Koch foundations “give money to nonprofit organizations that do research and advocacy on issues that impact the profit margin of Koch Industries.”

The International Forum on Globalization has mapped the various organizations and individuals that make up the tentacles of the Kochtopus.

They include media personalities such as Rush Limbaugh and Glenn Beck. Think tanks beyond CATO, including the American Enterprise Institute, which has received nearly $2 million in Koch cash, and the Heritage Foundation, which has received more than $4 million. Also benefitting from the Kochs are lobbying organizations such as the US Chamber of Commerce and the American Legislative Exchange Council.

And the Kochs provided nearly $6 million in funding for Americans for Prosperity, one of those organizations that split off from CSE’s tobacco Tea Party in the first decade of the twenty-first century to form the new Royalist-tinged Tea Party after Barack Obama was elected in 2008.

It takes a lot of money to get the entire political and economic class to buy into an ideology that has repeatedly caused massive economic crashes—especially since the last crash was still fresh in everyone’s mind.

As Charles Koch told Doherty, “We have a radical philosophy.”

The Tea Party, even if birthed by the tobacco companies, was nurtured by multimillionaire Royalists and billionaires such as Charles and David Koch. They spent millions to set up and promote Tea Party organizations, fund rallies, and charter buses to carry people from all around the country to boost participation.

And by the summer of 2009, what appeared to be a full‑on grass‑roots movement, but in the background was a well-oiled, corporate-funded anti-Obama PR machine, had developed all around the country, complete with mostly elderly white Americans shouting down their congressmen and congresswomen, accusing them of being socialists and pushing secret agendas to raise everybody’s taxes and destroy democracy.

But the Kochs weren’t operating alone. Born out of the Ailes memo for GOP TV in the 1970s, Fox News was now the most watched cable news network in America. And they did their part to squash any sort of Progressive Revolution, and ensure that the Royalists’ counterrevolution succeeds.

Fox News Gets in the Game

Bill Sammon got the memo.

On the morning of October 27, 2009, staffers at Fox News received an urgent message from their boss, the Washington managing editor, Bill Sammon. It had to do with certain wording to be used by Fox anchors when reporting on the health reform debate—in particular, the wording to be used to describe the “Public Option.”

Ten months had passed since Barack Obama and a slew of progressive Democrats in Congress were sworn in, promising to break up the Royalists’ stronghold in our democracy and economy.

First up was the Royalist dominance in our health care system—the only one in the entire developed world that does not offer health care as a basic human right.

The Royalists knew their grip on our nation’s health care system was in danger, so they grabbed ahold of their megaphone to spew disinformation—namely, Roger Ailes.

Fear of “death panels” was one of several myths spun out of the right-wing messaging campaign funded by big for-profit health insurance corporations opposed to any sort of health reform. It was given credence by Sarah Palin in an August 2009 Facebook post in which she wrote, “The America I know and love is not one in which my parents or my baby with Down Syndrome will have to stand in front of Obama’s ‘death panel’ so his bureaucrats can decide, based on a subjective judgment of their ‘level of productivity in society,’ whether they are worthy of health care. Such a system is downright evil.”

The ironic thing about Palin’s message was that so‑called death panels were actually a very real thing in America. Every single day, death panels at for-profit health insurance corporations determine whether or not it’s worth paying out a certain claim or signing on to a certain lifesaving medical procedure. In those cases, a “subjective judgment” is made on how a cancer patient’s chemotherapy will affect the corporation’s bottom line.

It was exactly this sort of abuse that President Obama’s Affordable Care Act was trying to curb. But in the perversion of the health reform debate, somehow that message got reversed. And even though there was no such thing as a “death panels” provision in the health reform bill, it was an issue that dominated much of the health care debate in the summer of 2009.

Another myth was that the president’s health reform would amount to a government takeover of the private health insurance industry. Given the antigovernment fervor sweeping the nation after thirty years of bad government under Royalist Republicans, this myth gained a lot of traction.

The Royalists warned that President Obama was taking over the American health care system with all its advanced MRI machines and laser surgeries and cutting-edge medication, and transforming it into a socialized, rationed health care system like the ones that were killing off millions of people in “Communist Europe.” It was a myth that everyone who lives outside the United States, in particular in Canada and Europe, regarded as patently absurd. Europeans have far better health care results than Americans, and nearly every single person I’ve talked to from a nation that has a single-payer system told me they prefer their health care system to mine any day of the week, thank you very much.

But Royalists were able to find a handful of Canadians who’d had a bad experience with their home health care system and paraded them around as victims of “socialized medicine.” Eventually, like the “death panels” myth, the government takeover myth stuck, too.

It grew out of the Public Option component of the health reform law.

In some parts of the country there was only one health insurance choice for consumers. One big for-profit health insurance corporation held a monopoly over the local market and could therefore charge whatever they liked and treat their customers however they liked. To inject some competition (the stuff Royalists claim to love) into the market, a government health insurance program was conceived that would serve as a more efficient and compassionate alternative to private health insurance plans. In the proposed health reform legislation, this alternative was known as the Public Option. The idea is simple, give people a choice and let the free market decide.

The Public Option was a far cry from what progressives wanted, which was a single-payer system. But if private health insurance corporations suddenly had to compete, then at least prices would get lower and quality would get better. Royalists hated the idea, as you would expect, since their corporate donors knew that more competition in the markets meant that less money could be diverted to the bonuses of health insurance executives such as “Dollar” Bill McGuire, who made a billion dollars working at United Healthcare.

So Fox News took up the cause. The subject of the Bill Sammons October 27, 2009, e‑mail was: “Friendly reminder: let’s not slip back into calling it the ‘public option.’”

This e‑mail was later obtained by the media-watchdog group Media Matters. It read in full:

1) Please use the term “government-run health insurance” or, when brevity is a concern, “government option,” whenever possible.

2) When it is necessary to use the term “public option” (which is, after all, firmly ensconced in the nation’s lexicon), use the qualifier “so‑called,” as in “the so‑called public option.”

The e‑mail continued with two more “reminders” from Sammon about how to talk about the Public Option:

3) Here’s another way to phrase it: “The public option, which is the government- run plan.”

4) When newsmakers and sources use the term “public option” in our stories, there’s not a lot we can do about it, since quotes are of course sacrosanct.

Fox anchors did as they were told, and suddenly the phrase “Public Option” vanished from the Fox News airwaves.

Why the name change? Why call it a “government option” rather than its legal name, the “Public Option”?

About two months earlier, on the same airwaves, Republican pollster Frank Luntz went on The Sean Hannity Show and let slip a critical Republican messaging strategy. In regard to the Public Option, Luntz told Hannity, “If you call it a ‘public option,’ the American people are split . . . [but] if you call it the ‘government option,’ the public is overwhelmingly against it.” After all, a “government option” implied a government takeover of health care, which meant socialized medicine.

A new message was born.

Here was the Washington managing editor of Fox News, Bill Sammon, instructing his news anchors to use poll-tested terms that would help Republicans sway the public’s opinion against President Obama’s health reform law. It was plain-and-simple propaganda.

Excerpted from the book "The Crash of 2016: The Plot to Destroy America -- and What We Can Do to Stop It" Copyright © 2013 by Thom Hartmann. Reprinted by permission of Twelve/Hachette Book Group, New York, NY. All rights reserved.