"Hello, baby. Check me out": Animals speak but don't say much

Painstaking research identified animal "speech." But despite scientists' hopes, critters are stuck on the basics 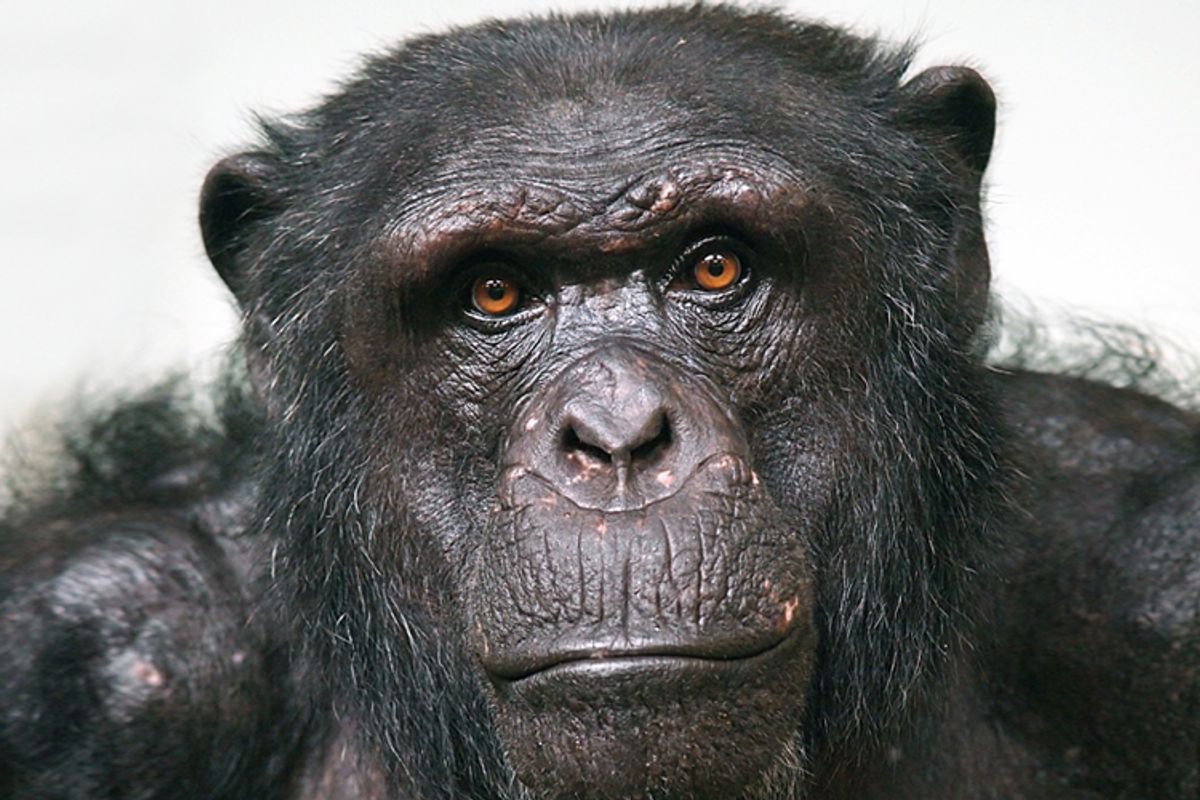 Excerpted from "The Gap"

There is between the whole animal kingdom on the one side, and man, even in his lowest state, on the other, a barrier which no animal has ever crossed, and that barrier is—Language.
—FRIEDRICH MAX MÜLLER

In 1873, two years after the publication of Darwin’s "The Descent of Man," Friedrich Max Müller, chair of philology at Oxford, posed a counterargument that no other animal had anything remotely like human language and hence there was no sign of gradual evolution, as Darwin’s theory seemed to predict. He raised this issue in defiance of the 1866 ban on discussions of the evolution of language by the Linguistic Society of Paris. In fact, Müller’s argument was perceived to be a serious threat to Darwin’s theory of evolution by natural selection. Recall that in the absence of genetics and a detailed fossil record, the debate centered on evidence of continuity between living species. Thus Müller’s claim about the language barrier not only was relevant to humans’ purported unique position but turned into an early battleground about the very theory of evolution. At the time little was known about primate communication, and Darwin himself wrote: “I wish someone would keep a lot of the most noisy monkeys, half free and study the means of communication.”

Enter Richard Garner—a young man from Virginia who in the 1890s, with the help of Edison’s newly invented cylinder phonograph, went out to decipher the vocalizations of primates through playback experiments. The idea was to record primate vocalizations in various circumstances and then play them back to other individuals to study their responses. Garner conducted his initial work in zoos and, to wide acclaim, reported early success in identifying the vocabulary of different primate species. He claimed, for instance, to have identified capuchin monkeys’ “words” for things ranging from “food” to “sickness.” He believed that the primate tongues he discovered were limited to names for concrete things but that they were the building blocks from which human abstract notions evolved. Not surprisingly, these conclusions attracted a lot of attention from both the public and the academic world.

When Garner boldly proposed to take a phonograph to Central Africa, sit in an electrified cage, and study simian tongues in the wild, there was hope the language evolution debate could be settled once and for all. Alas, the expedition did not turn out as planned. Garner’s quest to find convincing evidence in the African jungle was a failure even before it had begun. In spite of links with Edison, he did not manage to obtain a phonograph for the mission. When he returned, he faced an avalanche of accusations in the popular press about inconsistencies in his reports about what had occurred on the expedition. Rumors spread that he did not spend months in the deepest jungle but instead lived in or near the comforts of a mission; the stories led to widespread suspicion and ridicule. In any case, Garner did not return with new evidence but with a chimpanzee that could not speak or be deciphered—and that quickly perished. There was no support for his claims about chimpanzee and gorilla language. Instead of making a mark in the annals of evolutionary theory, Garner’s dream to learn the languages of animals became firmly entrenched in the realm of fiction, most notably in the character of Hugh Lofting’s Dr. Dolittle. Serious scientific attempts to discover simian languages, or to teach them ours, were put on hold.

In a fascinating account of Garner’s story, the science historian Gregory Radick suggests that one reason for this change in zeitgeist might have been the rise of ideas about evolution proceeding in leaps, as Stephen Jay Gould maintained, rather than in small, gradual steps. This reduces the need to find precursors of human language in apes. As I clarified earlier, Darwin’s theory does not have a real problem with the existence of radical discontinuities in the current record. Creatures that may have had precursors of human language, such as Homo erectus, are now extinct (leaving an apparent discontinuity between extant species). Furthermore, precursors of language need not even have been in the domain of vocalizations. It is possible that language first evolved in gestural form. Indeed, this idea of a gestural origin of human language, moving subsequently from hand to mouth as it were, is increasingly gathering momentum. The search for language precursors in primate vocalization may hence be a case of barking up the wrong tree.

Garner’s abandoned playback approach had its revival in the 1980s, when ethologists Dorothy Cheney and Robert Seyfarth conducted seminal studies on vervet monkey alarm calls at the foot of Mount Kilimanjaro. By recording alarm calls and then playing them back to the unsuspecting group at a later stage, these researchers established, for the first time, that nonhuman animal vocalizations may have meanings not entirely unlike human words, even if there exist far fewer of them. The animals make different alarm calls when they see a snake, an eagle, a leopard, or a human. When played back the monkeys tend to react differentially and appropriately to such calls. That is, they hide under a tree if the call is the eagle alarm, but they run up the tree if it is the leopard alarm.

These calls are gradually learned but limited to alarms only. There is no evidence for vervets stringing them together, let alone generating open-ended sentences. They do not show any evidence for recursion in their communication. A monkey may on occasion falsely utter the alarm call for “leopard,” making the rest of the troop run up the tree while he stays behind and eats the food the others discarded. This seems like a pretty clever form of tactical deception, but it also illustrates the lack of reasoning about what the others know. The monkeys up in the tree do not seem troubled by the fact the individual that cried wolf did not flee himself and instead took their food. They do not seem to reflect on (that is, meta-represent) the discrepancy between what the individual’s alarm represents and what his lack of running away represents. There is no evidence of reflective embedding in other monkey communication either. Although perhaps a building block on which human language was constructed, the calls of monkeys are limited in terms of flexibility, meaning, and use.

Indeed most animal vocalizations seem to be under emotional rather than cognitive control. When researchers stimulate a subcortical part of the brain known as the periaqueductal gray, it causes meowing and growling in cats, shrieking and barking in rhesus monkeys, echolocating in bats, and laughing in chimpanzees and humans. Destruction of this area causes muteness. The area is indispensable for animal vocalization and nonverbal human vocalization. As we have seen, human speech, on the other hand, is primarily driven by cortical areas of the left hemisphere that allow for voluntary control and extreme flexibility. Animal vocalization may hence not be closely related to human speech.

Nonetheless, some animal communication systems are quite sophisticated. Bee dance, for instance, communicates the size of a food source, the distance, and the horizontal direction. However, close examinations of communication systems of animals have found them to be restricted to a few types of information exchanges, typically to do with reproduction, territory, food, and alarm. There appears to be little content transferred beyond these realms. There is as yet no sign that animal communication features the open-ended flexibility that typifies human language.

What about whales? you might ask. Humpback whales sing in the most curious manner, they have large brains, and there is even evidence that they learn the songs from each other. Are they talking about us behind our backs? Disappointingly, the answer is “probably not.” The possible information content of a humpback whale song is estimated to be low indeed—just enough to say, “Hello, baby. Check me out.” Researchers now think it likely the songs are serving a simple mate-attraction function.

Excerpted with permission from "The Gap:The science of what separates us from other animals," by Thomas Suddendorf. Available from Basic Books, a member of The Perseus Books Group. Copyright © 2013.