Animal rights on the Xbox: A video game for vegans

On its tenth anniversary, there's still no more pro-animal game than "Whiplash" 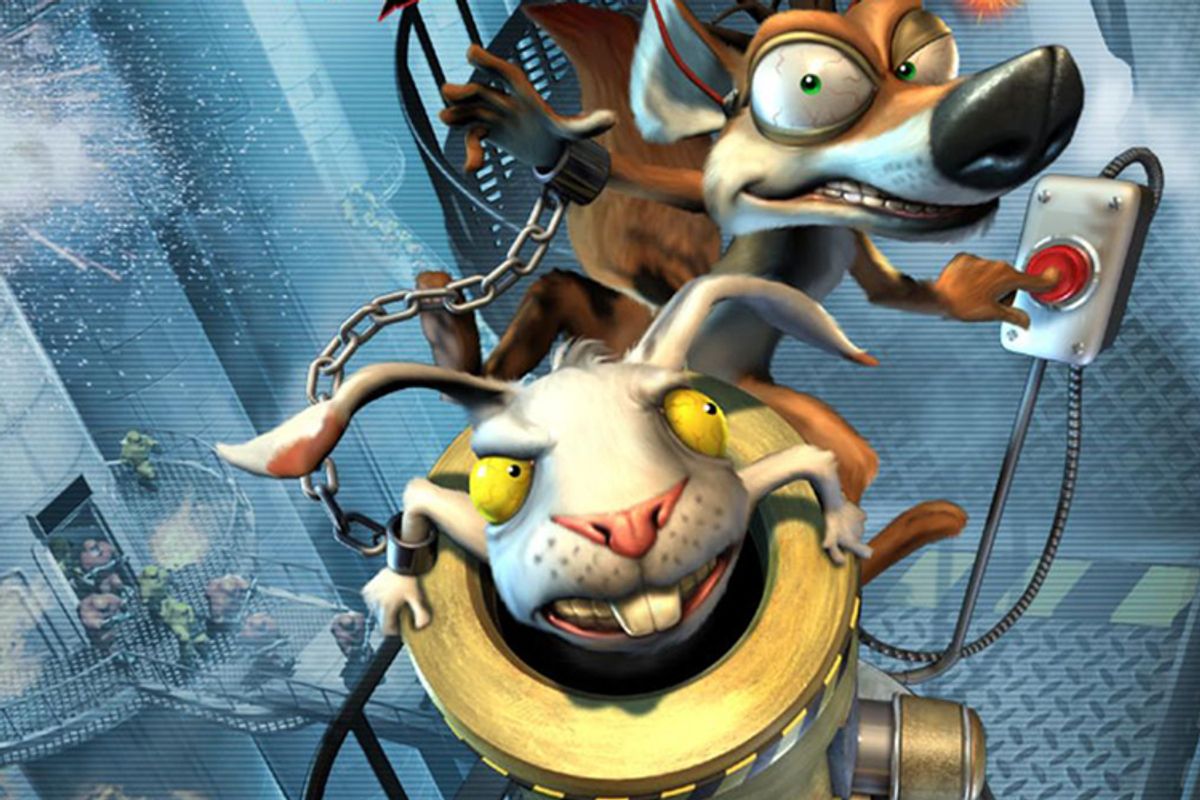 This year marks the 10th anniversary of "Whiplash," perhaps the most explicitly pro-animal video game ever to get a mainstream release. While the progressive themes in the Xbox and Playstation 2 title are undercut by its comic tone and narrow focus, the game's very existence is a win for animal rights activists.

The story follows a weasel and rabbit named Spanx and Redmond who have escaped from confinement within a product testing facility owned by the fictional corporation Genron. Chained together in a manner reminiscent of Stanley Kramer's "The Defiant Ones," the non-human fugitives romp through the facility freeing animals, destroying lab equipment, and attacking researchers, in an effort to ultimately bring Genron to its knees. Their progress is tracked based on the monetary value of the property damage they incur.

The game's loyalties are on clear display in satirical moments, such as when the head of the company responds to animal cruelty allegations with a humorous lack of irony, yelling, "If ripping off their limbs, grinding 'em up and feeding 'em back to themselves is cruel, if shooting their butts so full of poison they got to sit on their face is cruel, if skinning 'em alive until they're dead, and than doing an Italian fandango on their cute, little graves is cruelty to animals, than, yeah, I guess they should just cart me away and lock me up!"

From 1985's "Duck Hunt" to this year's "Pokemon X and Y," video games often use the exploitive relationship between humans and other animals, real or imagined, as subject matter. What makes "Whiplash" unique is that it views the topic from the perspective of non-humans and does so with significant sympathy.

The game was met with controversy when it was released in Britain, a country that has historically been at the forefront of animal-protection efforts. Eidos Interactive, the game's publisher, defended the title, writing in a statement that "although the video game is fictional we hope that it raises positive awareness of animal testing among children." But both police and scientists worried "Whiplash" encouraged terrorism.

The chairman of the Police Federation said, "This game is both alarming and disturbing. The role of the police service is to be independent, uphold the law and prevent disorder. We already have a tough enough job and this game seems to be sending the wrong message to young people, which is totally irresponsible."

Similarly, the executive director of Research Defence Society said, "The suggestion that this game might raise young people's awareness of the issues involved in animal experimentation is ludicrous. It's worrying that this game appears to condone acts that are clearly illegal or violent as an appropriate way of contributing to an informed debate."

Coming from a welfarist perspective, the Royal Society for the Prevention of Cruelty to Animals also criticized the game, arguing it trivialized non-human exploitation.

"The RSPCA puts a lot of effort into encouraging children to be compassionate towards animals and empathise with them," a representative said. "This is obviously sending out completely the opposite message, that animal suffering is funny - that it is something to make a joke out of."

While I would argue the game's progressive elements outweigh its regressive ones, that "Whiplash" often makes light of violence against animals is inarguable. Redmond, for instance, incensed by his treatment by Spanx, jokes, "I thought being stamped with makeup was degrading," alluding to torturous cosmetics testing.

Non-human suffering in general is seen as a source of amusement, such as when Spanx uses a Genron cannon that fires terrified chickens as projectiles. But this is particularly true in the case of Redmond, who is shackled to Spanx, the playable character, and essentially used as the latter's tool. Swung like a medieval mace, Redmond's a weapon. Stuffed into machine gears, he's an instrument of sabotage. And his resulting pain is intended to elicit laughter.

The game focuses on animal testing to the exclusion of more common forms of animal exploitation, such as food production. The threat of human omnivority occasionally looms in "Whiplash," with antagonists threatening to consume Redmond and Spanx. But it's clearly not intended as an across-the-board condemnation of flesh-eating. Even Redmond, who belongs to an herbivoric species, voices his yearning for a turkey sandwich.

On this 10th anniversary of "Whiplash," readers should not allow the title to be forgotten in gaming history. Culture does not directly cause violence against animals, but culture helps to normalize it. And, despite the title's flaws, to date there is no mainstream game which challenges our anthropocentrism more significantly. So this year let's raise a (vegan) toast to "Whiplash."