A Bush and Romney economic adviser compares having a baby with buying a Porsche. They can’t be this dumb, can they? 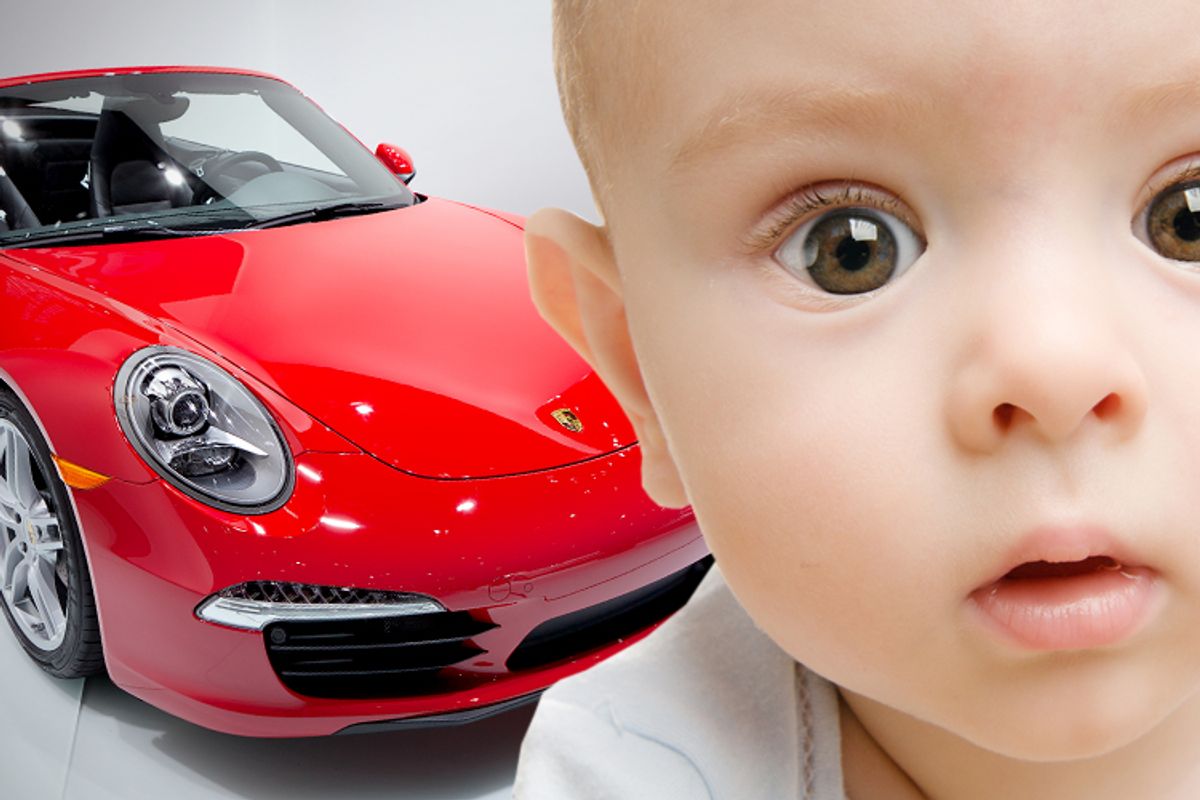 Conservatives continue to be outraged by the Affordable Care Act’s requirement that basic insurance policies cover maternity and newborn care. When Rep. Renee Ellmers, the chairwoman of the House GOP Women’s Policy Committee, asked Kathleen Sebelius “Has a man ever delivered a baby?” she was introducing her party’s best new argument against Obamacare. Forget “death panels”; now we have “birth panels,” which force Americans to pay for the continuation of the human species whether they want to or not.

You would think the supposedly “pro-life” party would be happy to put the power of the government behind keeping pregnant women and unborn babies safe and healthy. We should never let her lack of access to prenatal and newborn care make a woman decide abortion is a better choice, right?

Wrong. In fact, the right’s campaign against maternity coverage has only gotten more strident. Just Monday morning, Harvard economist and George W. Bush Council of Economic Advisors chair Greg Mankiw argued against such coverage with the worst analogy yet:

But having children is more a choice than a random act of nature. People who drive a new Porsche pay more for car insurance than those who drive an old Chevy. We consider that fair because which car you drive is a choice.  Why isn't having children viewed in the same way?

Oh boy. Maybe Mankiw needs to read E. J. Dionne’s latest column, “What’s the Matter With Motherhood?” Dionne is a Catholic liberal with a long history of advocating that pro-choice liberals should try to find common ground with antiabortion folks on issues like maternal and child care, women, infants and children nutrition programs and other supports to make sure women are never forced to have an abortion for economic reasons. But in the last decade liberals can’t find conservatives in Congress to collaborate with on those issues.

Indeed, Dionne found that conservatives are tying themselves in knots arguing against the ACA’s maternity-coverage provisions. In the National Review, Deroy Murdoch takes a novel gay-rights approach. “How about lesbians who do not want kids, and are highly unlikely to become pregnant accidentally?” Is the National Review now going to champion the rights of lesbians? Don't hold your breath.

The battle over the ACA’s baseline insurance provisions exposes the bottom line of the modern GOP: I will defend to the death your right to be gouged by your insurance company, so you can either go bankrupt when it doesn’t pay your medical bills, or go the E.R. and stick taxpayers with the bill. All the angst about changes in the private insurance market reveal why overhauling the insurance system has been so problematic, forever: It’s heavily premised on gambling and wishful thinking. Some people gamble that they won’t get sick, so they go without insurance entirely. Or they hope they won’t need hospitalization, so they go with cheap plans that cover almost nothing. Of course, when those people bet wrong, society covers their costs via emergency room visits, or they pay themselves and many go bankrupt.

On the issue of maternity care, specifically: Women who buy policies that don’t cover it are gambling that they won’t become pregnant, or that they can pay full freight themselves if they do – and plenty of them bet wrong. Of course, Mankiw’s response would presumably be something like the 1970s TV detective Tony Baretta’s: Don’t do the crime if you can’t do the time.

Clearly the far right’s antipathy to maternity care coverage comes from its determination to restore the husband-headed nuclear family: If a woman wants a man to share the cost of her maternity care, well, she ought to marry one. Otherwise, she’s on her own.

Mankiw doesn’t come from the social-issue wing of the party; he was Mitt Romney’s economic adviser. So he’s arguing in terms that make sense to his top 1 percent cohort: comparing the decision to have a baby to the decision to buy a Porsche. Are people still wondering why Romney lost last year?

This battle is exposing the rightward drift of even “reasonable” conservatives. They are increasingly uncomfortable with the government helping to level the playing field for corporations and their customers. At its base, “insurance” represents a private-sector approach to social risk-sharing and cost-sharing. Private companies have figured out how to make money helping people avoid certain kinds of catastrophes like illness, along with floods, earthquakes, burglaries or car accidents. Along the way they’ve also figured out how to game that system to pay out as little as possible to the insured while maximizing their premiums.

The Affordable Care Act has tried to work with that existing private system, but make it a little bit less like high-stakes gambling and more like, well, insurance: in which you’re insured that you’ll get what you need, and what you’re paying for, when you need it. That Mankiw is making common cause with a wingnut like Renee Ellmers shows the way social conservatives and plutocrats have found common ground in the modern GOP.