Homophobia on the playground 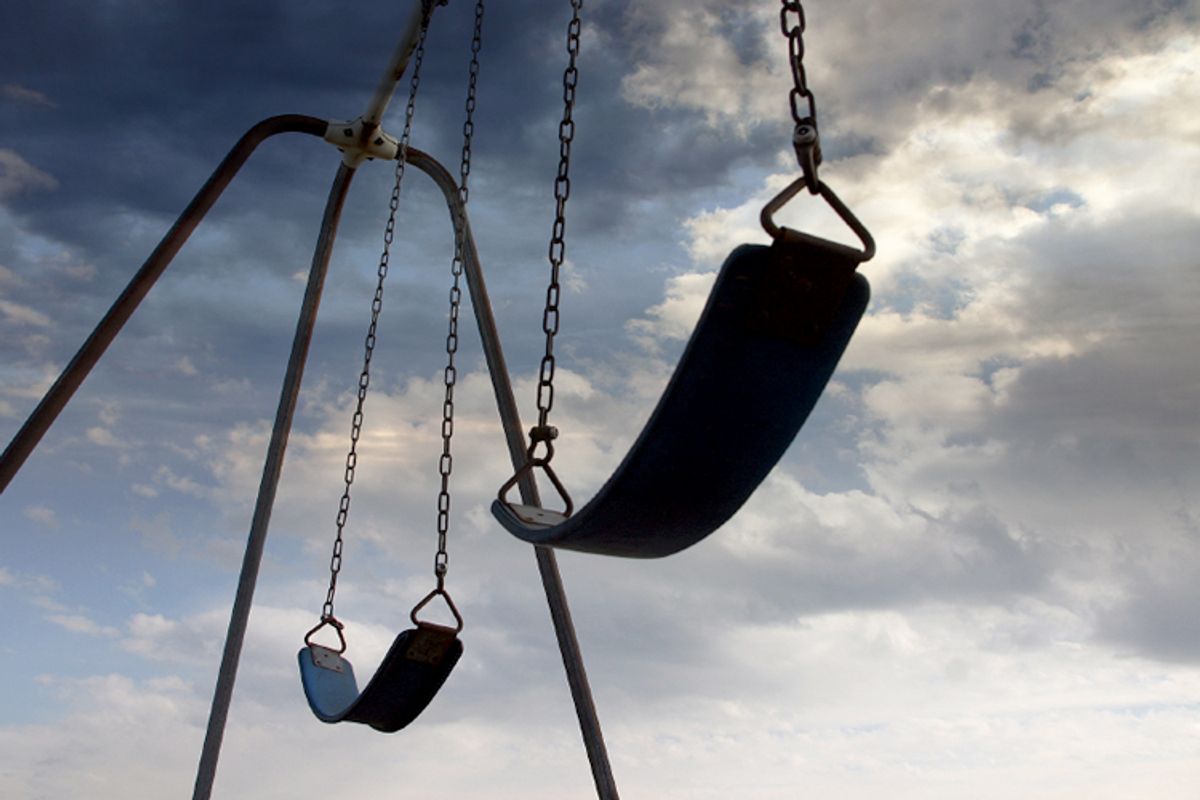 The boy ran up to me just as I was unlatching the play deck’s entry gate to pick up my daughter from day care. “Your daughter has five dads!” he yelled. My face reddened and my instinct to hide gave way to an impulse to pummel the small boy right on the playground. Yet I was out of breath, feeling as if I had shown up naked and was sucker punched. I steeled my stomach, drilled into the tot’s eyes and said, “She has two dads.”

For much of my life I feared I’d never become a parent. Twenty years ago, when I came out as a senior at the University of Southern California, I mourned the loss of ever throwing a football with my kid. After meeting my partner Peter, living together, and learning that two men could indeed have a child, we created a family through adoption. I was in my mid-thirties and Peter in his early forties. Like Mitchell and Cameron on “Modern Family,” we were two white men with our darker skinned daughter, and when we walked together down Broadway on the Upper West Side, passersby looked at us with uneven smiles. I was unsettled by their glances, but didn’t feel the need to acknowledge them. The boy's comment, however, stung.

As I spotted my daughter, L., swinging on the monkey bars, my legs grew heavier. I kissed her hello, and unclenched my fist for our walk home hand-in-hand. Instead of talking about what I would prepare for dinner, I reeled from the kid's remark. It felt like the time I revealed my sexual orientation to an aunt who responded, “Your grandfather, were he alive, would be disgraced. Homosexuality has brought down whole empires, let alone frail individuals.” What festered within me seemed to be more than shame. As the grandchild of four Armenian genocide survivors, I sensed my reaction was related to the residual rage that lived in my bones, passed down the generations, ready to strike in an instant.

I considered L.'s predicament: If I could be hurt by what that toddler said, she could be hurt worse. I wondered if the boy had taunted L. as they rode tricycles in the gym, out of teachers’ earshot. Never mind what he learned outside of school; teachers in the classroom needed to discuss the full gamut of family types.

Once home, we found Peter in the kitchen. While he helped L. wash her hands, I unleashed my fury. “This boy said to me that L. has five dads. Can you believe it? Calling us polygamists. Perverts, that’s what he meant. The Pope recently talked about people being obsessed with gay marriage. Obviously he hasn’t reached the three-year-old set.”

I was calmed by the repetitive motion of Peter’s hands lathering L.'s. He encouraged me to help clean up the mess in the boy's head, and probably in the classroom, by educating the teachers. I rummaged through the coat closet and found the bag of gifts we’d prepared for last-minute children’s birthday parties. I rifled past the marker collection and Barbie coloring book and located my solution: “And Tango Makes Three.” It was the true story of a Central Park zookeeper who offered two male penguins an egg to nurture. A baby penguin was born into their loving flippers and they thrived as a happy unit. I tucked the book into my briefcase, and started planning how I’d raise the issue with L.'s teacher, Ann.

During the morning walk to school, I kept half of my attention on L., and the other half on the twittering in my mind. I tried to determine how to follow “Hi, Ann” with a request for the book to be read aloud to the children, without letting my unwieldy anger leak.

L. and I arrived at the classroom door. Three kids were playing in a pile of pillows, and a few were sitting at a table eating cereal. My heart was pounding in my throat. I kept my fingers on the latch of my briefcase so I could open it in an instant. L.'s teacher stepped away from the assistant teacher, and I stepped toward her.

“Hi Ann, how are you?” I opened the conversation, without letting her answer. “I wanted to bring this book for the classroom, as a gift. Maybe you could read it during story time? It’s about a baby penguin raised by two dads. I should say, this is not about L.'s household. It’s about penguins.” I didn’t want Ann to force attention on my daughter because her family structure mirrored that of the animals in the story. “I think the children can benefit from hearing it. I’m not sure what’s discussed in the classroom about differences among parents. You know,” I said, pointing to the boy, “yesterday on the play deck he said L. has five dads.”

Ann looked at me, smiled and said, “He doesn’t know how to count.”

Apparently, we all had a lot to learn.

Haig Chahinian is an executive coach and writer in New York City. He's currently working on a memoir.