No, Joss Whedon, "feminist" is not a dirty word 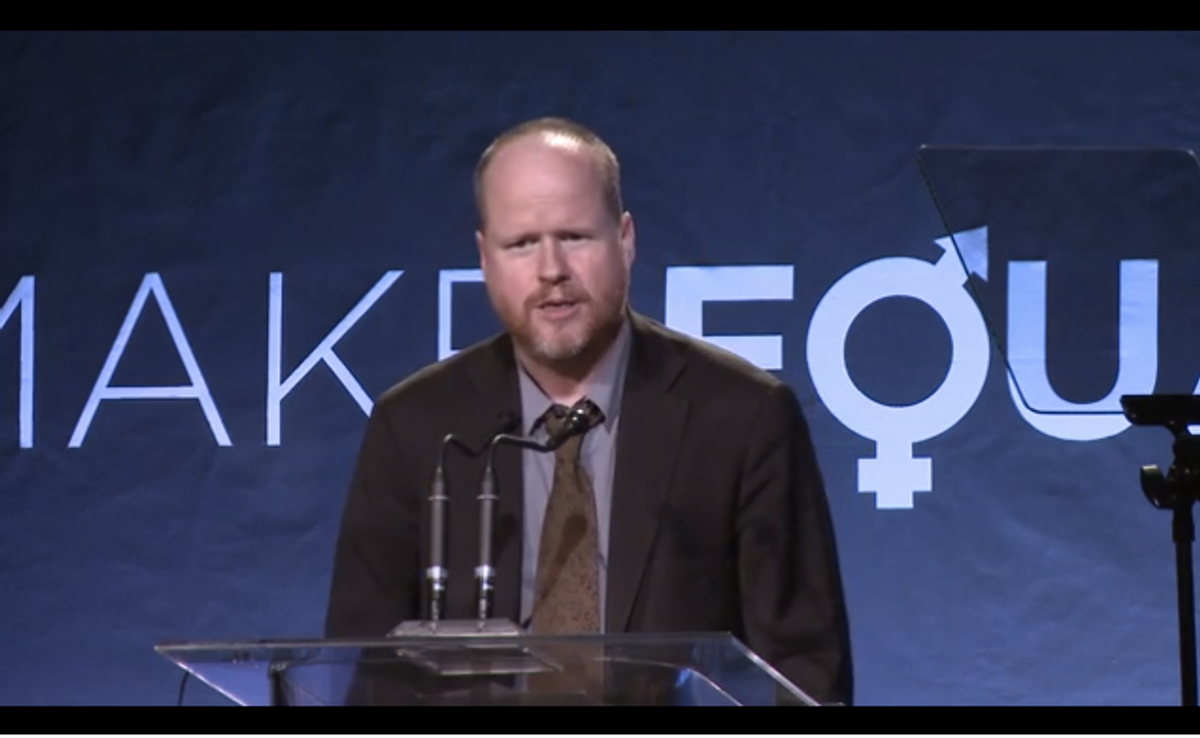 Joss Whedon gave a speech last week during which he said lots of nice things about how women deserve respect and access to rights and opportunities because they are people, and all people deserve these things.

But Whedon doesn't like the word "feminist" as a means of articulating this idea, he says, because it suggests that the belief that women are human is not a "natural state."

Here is how he explains it:

You can't be born a baptist; you have to be baptized. You can't be born an atheist or a communist or a horticulturalist. You have to have these things brought to you. So feminist includes the idea that believing men and women to be equal, believing all people to be people, is not a natural state. That we don't emerge assuming that everybody in the human race is a human, that the idea of equality is just an idea that's imposed on us. That we are indoctrinated with it, that it's an agenda.

This sounds like a fine enough idea, but as a feminist, I am wary of the concept of a "natural state." It is too often used to justify the so-called innate violence of some men, the presumption that women are biologically determined to be confined to the home and countless other gendered assumptions and impositions that marginalize women and keep the status quo running without question or disruption. So, I say forget natural states.

I wasn't born a feminist. I chose to become one. And that becoming has meant a continuous and rigorous doing, not to mention a lot of listening and learning from other feminists. Because feminism isn't just the idea that men and women are created equal, it's the process of interrogating what assumptions we bring to that idea in order to get us all somewhere closer to justice.

Take, for example, the dominant narrative about the gender wage gap. We talk a lot about the problem of how women, on average, still make 77 cents to a man's dollar. Women buy groceries, care for their families, fill up their gas tanks and need money to survive just like men, so there is no reason that their work should be valued at a lower rate.

But that number obscures a larger, more complicated reality about gender and poverty. According to a separate analysis of wage disparities, African-American women make 64 cents to the dollar. And Latina women make 55 cents to the dollar. Transgender women, particularly transgender women of color, make significantly less, and face higher rates of joblessness, homelessness and poverty than other women.

This is only one among many examples of how equality is a fraught and varied concept that requires work -- not just the unlocking of a natural condition -- to understand, critique and advance in its institutional and cultural contexts. This work is the work of feminism.

So in one way, Whedon is right. Feminism isn't a natural state. It is absolutely an agenda.

While Whedon acknowledges that the emergence of the concept of "racist" did not end racism and that his push for the popular usage of "genderist" to name gender-based discrimination will not end sexism, there is something in his aspirational post-racial, post-feminist framing that, as Noah Berlatsky at the Atlantic notes, reproduces the same blind spots that allow cultural and structural injustices to persist unnamed and unchallenged, particularly within progressive movements.

Critiques of these blind spots and erasures, made by feminists themselves, have a long history, from the 18th century intersectional activism of Sojourner Truth to current immigrant youth leaders like Angy Rivera who continue to push feminism -- and our culture -- to be more just.

Mikki Kendall, who is behind the hashtag #solidarityisforwhitewomen, wrote recently about what she thinks justice and solidarity can look like for feminists, particularly for white feminists. But her critique functions just as well as a reminder to Whedon about what he leaves out of his framing:

Educate yourself. Invariably in these conversations [about how to be an anti-racist feminist ally] a list of books, articles, and blogs is referenced, linked to, whatever. Go read them. No, not all of them on the same day. But really, if you only know Audre Lorde and bell hooks as quotes, if you've never read anything written by undocumented people, if you know nothing about indigenous Americans beyond Thanksgiving myths, if you've never read anything written by trans women, by disabled women, by women with identities that cover more than one of these categories? Your education is limited. No one can fix that but you.

"We’re not post-bigotry," Kendall writes earlier in the same piece, "but we are at a place where we can start trying to get there."

Whedon is pushing for something good -- the post-bigotry moment, basically. "We will never not be fighting," he says in his conclusion. "And I say to everybody on the other side of that line who believe that women are to be bought and trafficked or ignored ... we will never not be fighting. We will go on, we will always work this issue until it doesn't need to be worked anymore."

Call that fight what you will, but it's a fight. Against the status quo, and against the entrenched biases and institutional forces that most people think of as "natural."

And working against those inequities is an agenda I call feminism, whether Whedon thinks it's good branding or not.