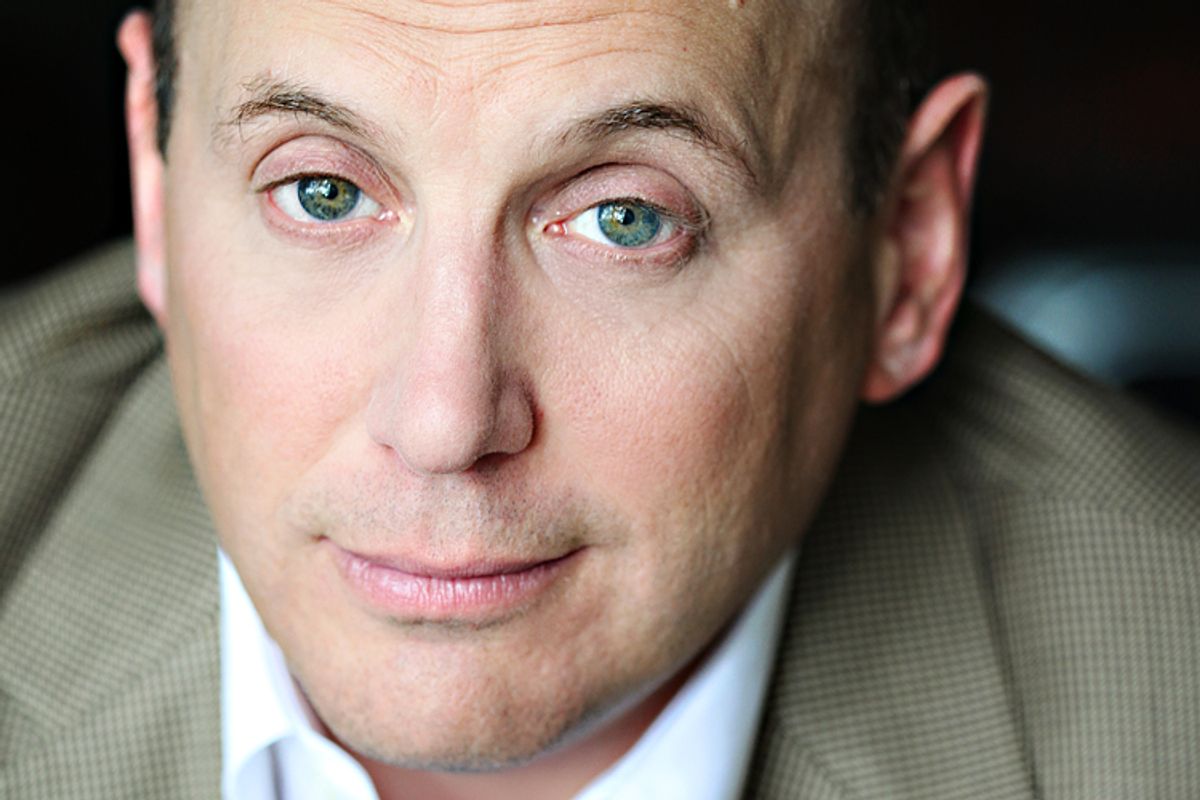 No shortage of individuals willing to advance theories about how former National Security Agency contractor Edward Snowden became a spy for America’s enemies exist. There are a number, who write about United States national security and consider themselves experts in national security, who have developed their own version of history where Snowden is not a whistle-blower and is now working for Russia or China (or both).

Kurt Eichenwald, a contributing editor for Vanity Fair and also a writer for Newsweek, had a feature story published by Newsweek recently that was specifically intended to present Snowden as a former intelligence agency employee who had become a Chinese spy.

The feature story did not explicitly call Snowden a “spy,” but that was implied throughout. Eichenwald presented Snowden’s release of secret documents revealing the true nature of the U.S. surveillance state as aiding China’s “voracious theft of corporate, government and military secrets.” Eichenwald accused Snowden of being responsible for China escalating cyberwar.

There is no proof or evidence that Snowden has been working on behalf of China to expose U.S. state secrets that the country could use specifically to aid in its hacking against industrialized democracies around the world. Yet, in addition to this feature story on Snowden, Eichenwald has spent hours upon hours on Twitter pushing a wild theory that what Snowden did makes him a spy.

Being a Newsweek writer and Vanity Fair editor gives Eichenwald a level of credibility that leads people, who come into contact with his views, to take what he says seriously. He has put himself forward as an “expert” on the Snowden story. He often acts like a serious person, who expects to be taken seriously. That is why it is worth examining some of what he has said and argued about Snowden.

Eichenwald believes, “Snowden has gone from a sort-of whistleblower to a son of a bitch acting solely [to] harm America and its citizens. Worse than Robert Hanssen,” a former FBI agent who sold secrets to the USSR then Russia.

Referring to himself in the third person, which may or may not indicate some kind of psychosis, he has stated, “Kurt Eichenwald doesn’t depend on fools on the internet who know nothing about national security systems to decide what [to] think.” And he has also said, “I was originally, ‘Meh, attentive people know this.’ Then, ‘what the hell is he doing?’ Then ‘OMIGOD, is he that dumb?’ To ‘Traitor!’”

One of the key issues that Eichenwald has is the fact that he wrote a book, "500 Days: Secrets and Lies in the Terror Wars," where he reported some of what has been given attention these past months. He contends that he revealed what Snowden did on PRISM, which he has said is “not a program and not a secret.” He has maintained Snowden really revealed what 702, a provision of the FISA Amendments Act, can do, and he wrote about that in his book. He also claims to have revealed the program where the NSA was collecting call records from all consumers.

In the book, Eichenwald did report on records held by telephone and broadband companies under the administration of President George W. Bush. The NSA “would urge the corporations to share logs showing all calls to and from phones, including the time and length of the conversation, as well as details of emails showing when they were sent to what accounts, and subject lines; for the most part, the contents would not be reviewed without a warrant.”

Also, he wrote in his book, “There was a strong argument” that “tapping calls coming into the United States or collecting a massive database of personal information about Americans might constitute domestic surveillance in violation of FISA.” He also added that collecting all this data might violate the Fourth Amendment.

The book also does not make it clear that the NSA is going to a secret surveillance court to obtain court orders for the call records of all Americans and renewing these orders every three months to compel phone companies to provide data, which Snowden revealed.

In June, after the court order for Verizon records of American customers was published, Eichenwald wrote for Vanity Fair, “I learned details of the program—begun in the Bush administration and carried over to the present day—in the course of reporting for my book 500 Days and wrote about it. Verizon is just the tip of the iceberg. The government has been obtaining phone records from all major carriers for years—first voluntarily and ultimately by subpoena.”

Maybe Eichenwald did know, but he did not include those details in his book. He did not name all the major carriers and what they were doing with the NSA. The material on the NSA was a nugget in a much larger book on the Bush administration’s fight against terrorism in general. He held back information because the program made sense to him, and, as he stated in June, “What I do know is that the collection and analysis of this information have led to the disruption of significant terrorist attacks.” (Of course, that is what his government sources told him, but this has been proven to be far from the truth.)

Now, what does Eichenwald think Snowden did as a service to China?

Snowden’s clandestine efforts to disclose thousands of classified documents about NSA surveillance emerged as the push against Chinese hacking intensified. He reached out to reporters after the public revelations about China’s surveillance of the Times’s computers and the years of hacking by Unit 61398 into networks used by American businesses and government agencies. On May 24, in an email from Hong Kong, Snowden informed a Washington Post reporter to whom he had given documents that the paper had 72 hours to publish them or he would take them elsewhere; had the Post complied, its story about American computer spying would have run on the day Donilon landed in Beijing to push for Chinese hacking to be on the agenda for the presidential summit.

The first report based on Snowden’s documents finally appeared in The Guardian on June 5, two days before the Obama-Xi meeting, revealing the existence of a top-secret NSA program that swept up untold amounts of data on phone calls and Internet activity. When Obama raised the topic of hacking, administration officials say, Xi again denied that China engaged in such actions, then cited The Guardian report as proof that America should not be lecturing Beijing about abusive surveillance.

On Twitter, when discussing his theory with people he likes to call “Snowdenphiles,” he has been more explicit about “coincidences” that stand out to him and make him a spy: 1) He told the Washington Post to publish on the exact day the U.S. had its first meeting with China about surveillance or he would go elsewhere; 2) prior to publication of the first article, he fled to Hong Kong, where he disclosed U.S. surveillance of China; 3) the first NSA story appeared two days before Obama and Xi met for their first high-level meeting on Chinese surveillance; 4) revelations from him were used by Xi as a basis for why he would not talk to the U.S. about surveillance, because they do it; 5) Snowden claims he followed China surveillance while working as a NSA contractor but says nothing about what they do; 6) Snowden left all of the documents in Hong Kong.

There is a lot of lunacy to address here. One, the documents were given to journalists like Glenn Greenwald or Laura Poitras, not state-controlled journalists in China, as Eichenwald would like his readers to believe. Two, he did not disclose U.S. surveillance of China on a broad scale. Snowden disclosed hacking. He disclosed hacking because the hypocrisy of America condemning the Chinese for hacking into networks while the NSA engaged in the same activities bothered him.

Just because Chinese leaders were able to use the information in official diplomatic meetings does not constitute evidence that he has become a spy. If that makes him a spy, one could also weave together an argument that he is now a Brazilian or German spy. He has been willing to speak to the country’s leaders. He has been willing to accept asylum if it was offered. Those revelations also set back relations and impacted agenda items, but Eichenwald is not specifically braying about how this information shows he turned traitor.

Another dimension to the crazy: Washington Post writer Barton Gellman, who reported on documents from Snowden after he reached out to him, is an unwitting dupe manipulated by Snowden to sabotage U.S. efforts to defeat Chinese hacking if what Eichenwald says is true.

Furthermore, why is Snowden in Russia if he is a Chinese spy? Or, maybe this is a part of the “espionage operation” Eichenwald’s unearthed. Snowden cannot be in a palace in Beijing because it would be too obvious that he was not a whistle-blower, which he needs to appear to be to remain effective. So, Russian president Vladimir Putin is keeping Snowden safe as a favor to China.

It is stunning that Vanity Fair or Newsweek would continue to give a platform to someone like Eichenwald, who has treated “coincidences” like 9/11 Truthers or birthers treat "coincidences." But what he has spent so much time arguing harmonizes with what individuals like Paul Pillar, Joshua Foust or John Schindler have also committed the past months of their lives to advancing.

Even the New York Times has periodically featured stories giving attention to the view that Snowden has turned traitor by allowing himself to be put under the control of Russian security services, even though no one has come up with a source or proof to substantiate this allegation.

People like Eichenwald, Foust, Pillar and Schindler all seem to be deeply offended that the sanctity of the U.S. surveillance state — present to advance and maintain America’s dominance in the world — has come under challenge. They are each truly upset that Snowden revealed information the government was keeping secret so it would not be exposed as a hypocrite when it came to key principles of freedom and democracy. This undermines America’s global agenda and “national security” and so Snowden must be smeared by them through the promotion of their own espionage fantasies.

Snowden has none of the documents he took with him from the NSA after he decided to become a whistle-blower. As he said to Times reporter James Risen, “What would be the unique value of personally carrying another copy of the materials onward?” He was not going to write about the documents and make them public; that job was up to journalists he entrusted with the material.