Worrying signs for Obamacare: Plan B needed for Healthcare.gov

Obama officials no longer sound very confident that Healthcare.gov will be working by Dec 1. Here's what that means 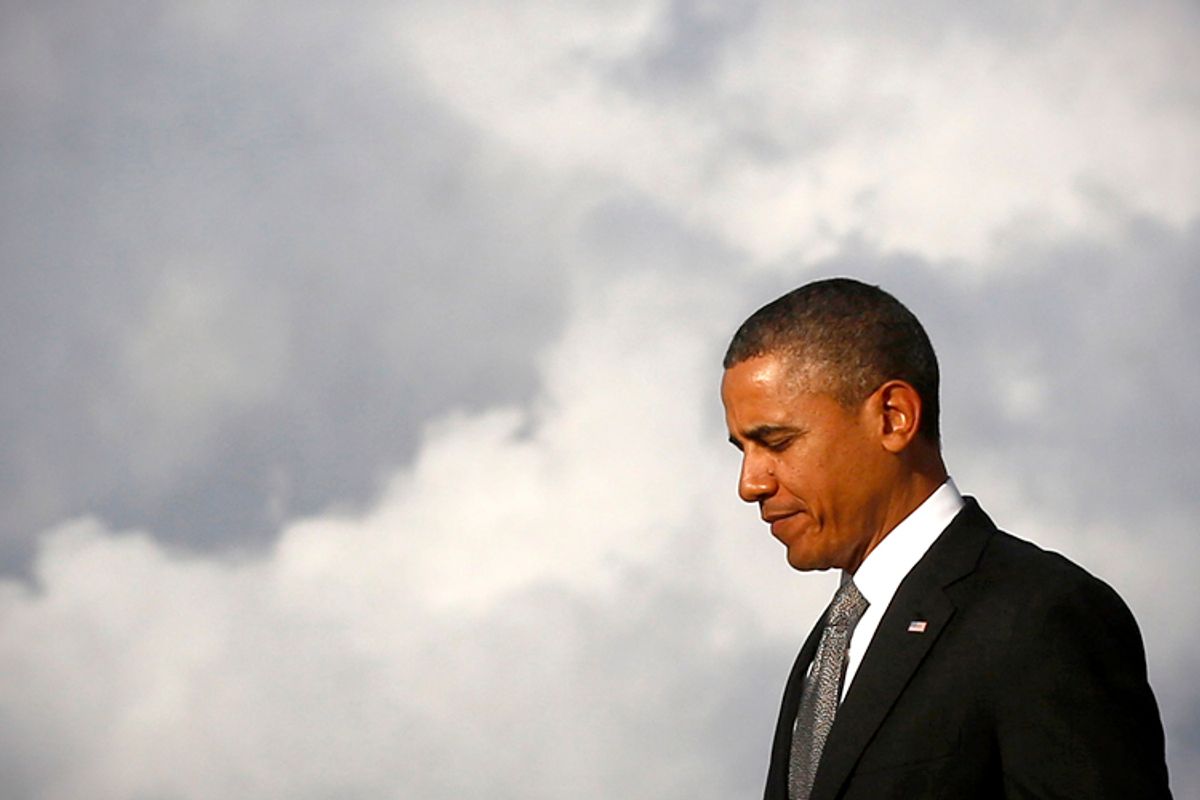 From a political communications perspective, the purpose of President Obama's interview with NBC's Chuck Todd last week was to apologize to anybody who had been misled by his promise that everyone would be able to keep their existing insurance policies.

And a nationally televised apology from a president to the public happens so rarely, and is such a strong statement of political vulnerability, that it predictably commanded the lion's share of attention from the rest of the media.

But for my money the newsiest moment wasn't the apology. It was this not-so-stirring assessment of the progress the administration has made in its ongoing effort to fix Healthcare.gov.

"Now that -- you know, having said that, given that I've been burned already with a website," here he checked himself, "well, more importantly, the American people have been burned by a website that has been dysfunctional. What we've also been doing is creating a whole other set of tracks. Making sure that people can apply by phone effectively. Making sure that people can apply in person effectively. So what I'm confident about is that anybody who wants to buy health insurance through the marketplace, they are going to be able to buy it."

Then on Thursday the administration offered up the following progress report.

"Essentially what is happening is people are going through the entire process," a spokeswoman for the Center for Medicare and Medicaid Services told reporters on a conference call. "As we have fixed certain pieces of functionality, like the account creation process, we're seeing volume go further down the application. We're identifying new issues that we need to be in a position to troubleshoot."

I'm no tech expert, but when I read that, I imagined plumbers working a clogged pipe with no way to visualize how many constrictions need to be cleared. Each blockage hides another a few inches deeper into the system. Or to put it in terms the administration might use, when they punch an item off the list they have to add another item to it. One step forward, one step back.

The administration's official line remains that it's confident Healthcare.gov will be working for the vast majority of users by the end of the month. But its detailed assessments make that harder and harder to believe. Insurance industry officials don't share the administration's confidence. And Republicans in Congress don't just smell blood -- they're lapping it up like vampiric dogs.

So the administration needs backup plans: One to get the law chugging along somehow without accessible marketplaces in most states, and one to manage the political fallout of a non-functioning federal exchange, which will be horrendous.

Robert Laszewski, an industry consultant who's been writing about Healthcare.gov's failures for the past six weeks, posits some policy options here. These include encouraging people to enroll directly with the insurance companies participating in the exchanges. Even if it means asking working- and middle-class people to pay sticker price premiums for as long as it takes to get the subsidy system up and running, with the understanding that overpayments will be refunded to them by the IRS.

The political problem is almost as intractable, and in many ways could interfere with key policy imperatives.

This week, Republicans will put legislation on the House floor that would essentially require insurance companies to allow people to keep their recently canceled plans for another year -- the Keep Your Health Plan Act -- and exempt the policyholders from the mandate penalty. The bill has little policy merit. It would significantly limit the scale of the exchanges, perhaps enough to deny them the critical mass they'll need to effectively spread risk, and it would be difficult if not impossible to implement from an industry perspective. But it's on the right side of public opinion and it's largely intended to fracture the pro-Obamacare coalition. If it ever clears the Senate, Obama would quite possibly have to veto it.

A working website would limit the political consequences the canceled plans are causing, but it's in many ways a distinct problem. Republicans would be using the cancellations as impetus to undermine the law even if Healthcare.gov were functioning as well as Amazon. The administration is looking for an administrative remedy for cancellation letter recipients, but there's no obvious solution that wouldn't require congressional action, and Republicans would block congressional action -- such as extending subsidies -- that actually addresses the problem without undermining the law. In other words, Obama is facing a political nightmare, and we're not even at the point of contemplating the damage Republicans will inflict if the site isn't working by the end of the month.

Democrats in Congress will then face increasing pressure to agree to a GOP plan to delay the individual mandate penalty for a year -- an approach intended to use Healthcare.gov's collapse to pull the rug out from underneath well-functioning markets in states with their own exchanges.

The administration may have the authority it needs to circumvent Congress here -- extend the open enrollment period and provide hardship exemptions from the penalty to people in states without functioning marketplaces. But it would have to be prepared to admit failure first.

Now obviously Obama shouldn't contemplate doing any of this if the site really will be working by the end of the month. But if and when it becomes clear to administration officials that it won't be ready, they'll need to announce the failure and the workaround more or less simultaneously. The absence of a plan B would create a vacuum for congressional saboteurs, and Democrats would probably get sucked into it. Opposing all proposed solutions won't be sustainable. And at that point Obama would have to entertain the prospect of allowing Republicans to inflict lasting damage upon his signature achievement.