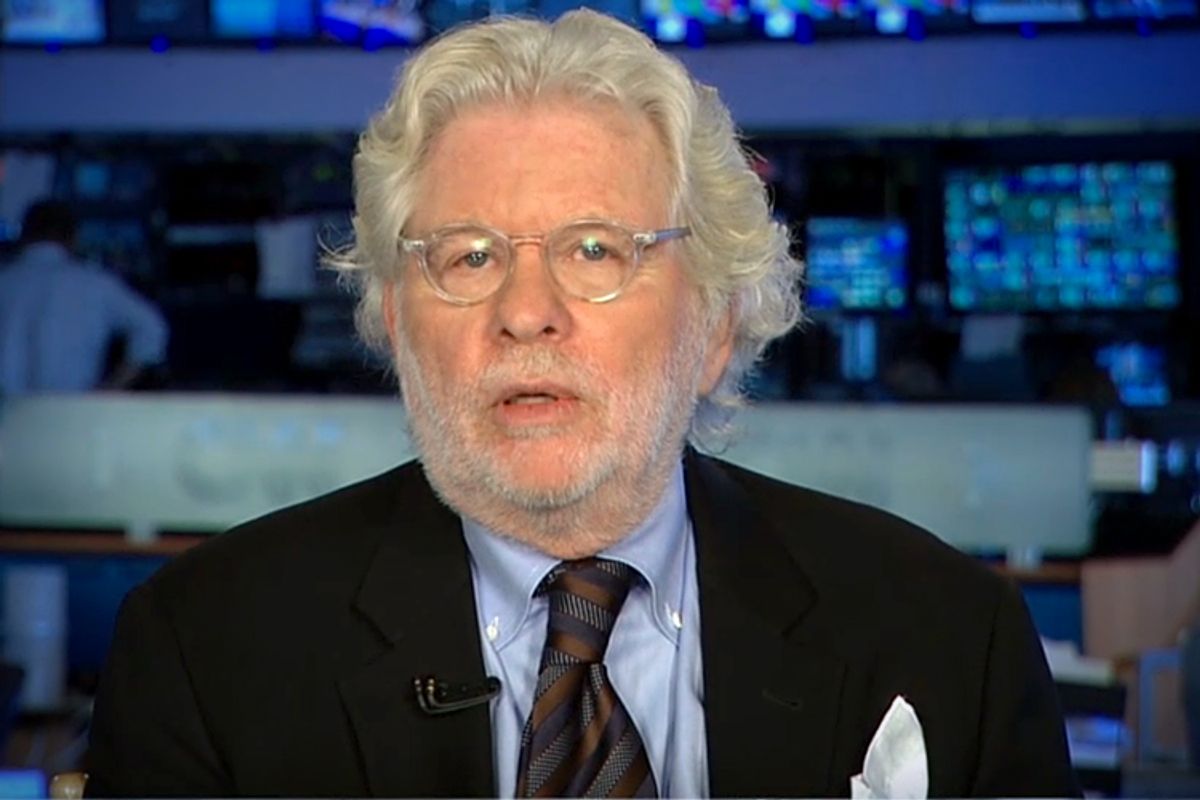 There are four, and only four, Richard Cohen columns.

1. Boring conventional political column
2. Inscrutable, unfunny joke column
3. "I am scared of black people" column
4. "I am shocked and outraged that people called me racist/idiotic/humorless" column

We are due for a number four any day now. He probably has one or two pre-written ones, just waiting for those moments when people remember Richard Cohen's existence and read the latest things he has said. Here's today's entry (emphasis mine):

They're not racist, they're just disgusted at the prospect of miscegenation. And it's a perfectly natural revulsion!

The trouble with this paragraph is the use of the word "conventional" instead of, say, "retrograde" or "archaic" or "racist." What kind of mind, and person, says "conventional" there? What kind of mind, and person, just automatically thinks of "conventional" "people" as reactionary, racist whites? Neutral, normal people, for Cohen, are always reactionary whites; remember how black kids in hoodies are wearing a "uniform we all recognize"? That "we all" there was doing the same work the "people with conventional views" is doing here. Those choices reveal a man very much out of touch with this era and deeply discomfited by it. (They also reveal a man who is terrified of black people.)

So, here in the real world, in 2013, the vast majority of Americans "approve" of interracial marriage. Majorities have approved since the mid-1990s. Seventy percent of people over 65 approve of black-white marriage. The "conventional" view, now, is that multiracial families are normal. "People with conventional views" are much more appalled by unreconstructed racism than by seeing a white man and a black woman raise a family together.

Keep in mind, Richard Cohen is only in his early 70s. He is in his early 70s, and he is from New York City. He is a secular liberal Jewish New Yorker who was in college, in New York City, at the height of the counterculture and New Left and civil rights movements. He did not grow up in the South during Jim Crow, or the lily-white rural Midwest. New York is one of the few American states that never even passed an anti-miscegenation law. If movies are what it takes for Richard Cohen to learn to see people of other races as human, I can only wonder why he didn't see "Guess Who's Coming to Dinner," which came out while he was attending Columbia University.

UPDATE: I just wanted to add an update here, based on Richard Cohen's response to the uproar that greeted this awful column. You will not be shocked to learn that the man who once proclaimed himself the target of a "digital lynch mob," because too many people were emailing him, is reasonably sure that he is The Real Victim Here.

Just to clear things up, Cohen is not grossed out by interracial relationships, everyone:

When asked if he believed that people who do “have a gag reflex” at the idea of interracial marriage are in fact racist, he said that he did. “I could have picked a better word, but it didn't ring any bells with anybody, it didn't ring any bells with me,” he continued. “But there is a context to the column. You've got to read the whole column and if you read the whole column you can't honestly think that these are my views or I endorse the views that I articulated in the column.”

This is my favorite part of this interview, because here we learn that when you read a Richard Cohen column out loud to Richard Cohen, he is like, no, of course not, who would even think such a stupid thing! He thinks he is defending himself, but he is actually directly contradicting the thing he wrote. Cohen didn't just refer to disgust with interracial marriage as a "conventional view," he explicitly said it wasn't racist. While Cohen can claim to have been describing the views of others when he mentioned gut discomfort with interracial relationships, there's no way to get around the fact that he straight-up prefaced that description with the words, "today's GOP is not racist."

Again and again, the way Cohen writes about race -- the specific words and phrases he uses -- suggest a man deeply uncomfortable with diversity and modernity projecting his views onto others -- "people with conventional views," this time, and "we all," when he wrote about Trayvon Martin's "uniform." So, no, he does not think he is racist, of course not. He has no problem with mutiracial families! He just sympathizes with people who do, until you point out to him what that sympathy implies, at which point he finally achieves some level of awareness.

Not too much awareness, though:

Cohen has been criticized for his comments on race in the past. When asked why he thought it was that he keeps getting caught up in racially charged arguments, he said that it's because people view him as a liberal and find some of his positions unconventional. "Every once in a while I take an unconventional stance as a liberal -- as someone who has always been called a liberal," he said. "If someone on the right wrote this, no one would care. No one would make a big deal about it but because I veer every once in awhile from orthodoxy, or maybe more than once in awhile, I get plastered this way."

Richard Cohen pondering why he is so often in hot water over remarks relating to race suggests nothing so much as this classic (and NSFW) Onion article. (I believe Tom Scocca was the first person to draw this particular comparison.) Why do I keep getting in trouble when I write nearly anything related to race in America? It must be... because... I am an unconventional liberal...?

Michael Kinsley is an unconventional liberal who frequently writes contrarian things, and he does not cause a race-related shitstorm every six months. Fox News Democrats Pat Caddell and Doug Schoen have devoted the last decade to openly trolling the left and even they manage to avoid constantly getting credibly accused of writing racist things. Lanny Davis hasn't managed to sound as stupid on race as Cohen does every time he writes about it. I think it's something other than unconventionality.

Editorial page editor Fred Hiatt, meanwhile, says he should have probably edited the offending sentence "more carefully," which just seems like a tacit admission that no one is editing Cohen at all.

I also should add that I left out the fifth Richard Cohen column. As Eamon Murphy pointed out, it is, "weird rumination on sexual norms." (See, for example, this. And, I guess, this.) I deeply regret the omission.