The founder of Uber changes his Twitter avatar to Alexander Hamilton. Libertarians will not be amused 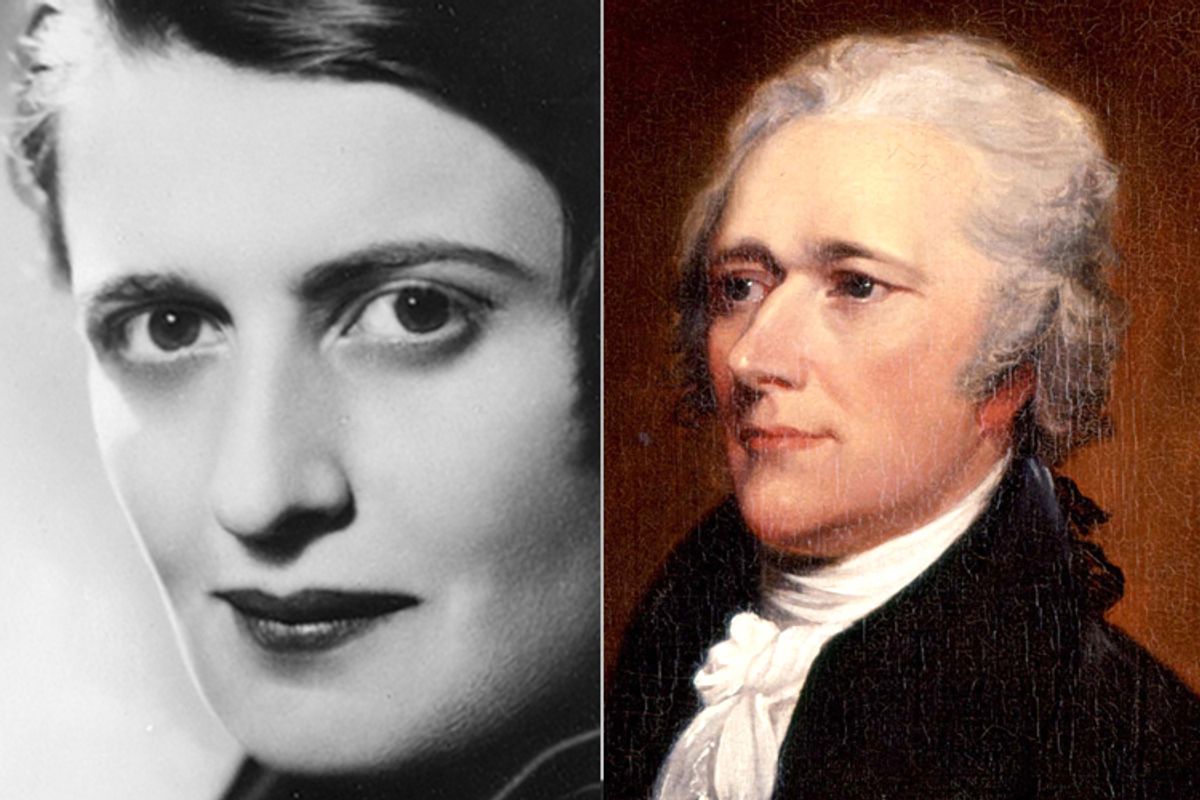 Is libertarian ideology losing its shine in Silicon Valley?

Valleywag's Nitasha Tiku noticed Tuesday morning that Travis Kalanick, the CEO and founder of the fast-growing Uber car service, changed his Twitter avatar from the cover of Ayn Rand's "The Fountainhead" to an image of Founding Father Alexander Hamilton.

To borrow a revolutionary-era analogy; for hardcore libertarians, this is the kind of move one would normally associate with Benedict Arnold.

Ayn Rand, of course, is herself one of the fountainheads of modern get-rid-of-government libertarianism. But Alexander Hamilton was something quite different. The first secretary of the Treasury not only created the nation's first central bank, but was also the earliest and most forceful advocate of a strong government role in developing the U.S. economy. In his "Report on Manufactures" he laid out in painstaking detail a program for industrial policy arguing that if the United States was to compete with the established nations of Europe and make the most productive use of its labor possible, the government needed to get involved. America's budding manufacturing start-ups needed help!

"To be enabled to contend with success, it is evident, that the interference and aid of their own government are indispensable," he wrote.

To this day, hard-money libertarians are aghast at Hamilton's strong advocacy of issuing government debt to pay for infrastructural improvements and other measures that would implement federal economic policy.

Want to know what libertarians think of Hamilton? Try this excerpt from a column by Thomas DiLorenzo, published by the Austrian economics-adoring Ludwig Von Mises Institute.

Hamiltonian mercantilism is essentially the economic and political system that Americans have lived under for several generations now: a king-like president who rules through "executive orders" and disregards any and all constitutional constraints on his powers; state governments that are mere puppets of the central government; corporate welfare run amok, especially in light of the most recent outrage, the Wall Street Plutocrat Bailout Bill; a $10 trillion national debt ($70 trillion if one counts the government's unfunded liabilities); a perpetual boom-and-bust cycle caused by the Wizard of Oz–like central planners at the Fed; constant military aggression around the world that only seems to benefit defense contractors and other beneficiaries of the warfare state; and more than half of the population bribed with subsidies of every kind imaginable to support the never-ending growth of the state. This is Hamilton's curse on America — a curse that must be exorcized if there is to be any hope of resurrecting American freedom and prosperity.

So why in the world would Travis Kalanick forsake his admiration of "The Fountainhead" in favor of Alexander "Big Government" Hamilton? I haven't heard back from Uber yet, but I do have one theory. Uber has discovered that disrupting the existing taxi monopolies in the world's great cities is easier said than done. Safety and health regulations, insurance issues -- there are all kinds of nasty hoops to jump through if you want to make a big business of transporting citizens around urban metropolises. Like it or not, Silicon Valley's most ambitious start-ups will be forced to work with government, instead of blowing it up.

Ayn Rand is simply not a useful guide to operating in a modern economy. Alexander Hamilton is where it's at.

"Travis loves to read and tends to use social media to highlight interesting fictional and historical characters he finds in literature. He updated his Twitter avatar several months ago after reading Ron Chernow's biography of Alexander Hamilton."