The craziest OkCupid date ever

Jeff and I traveled to eight countries in 21 days without changing clothes. It sure beat meeting for coffee 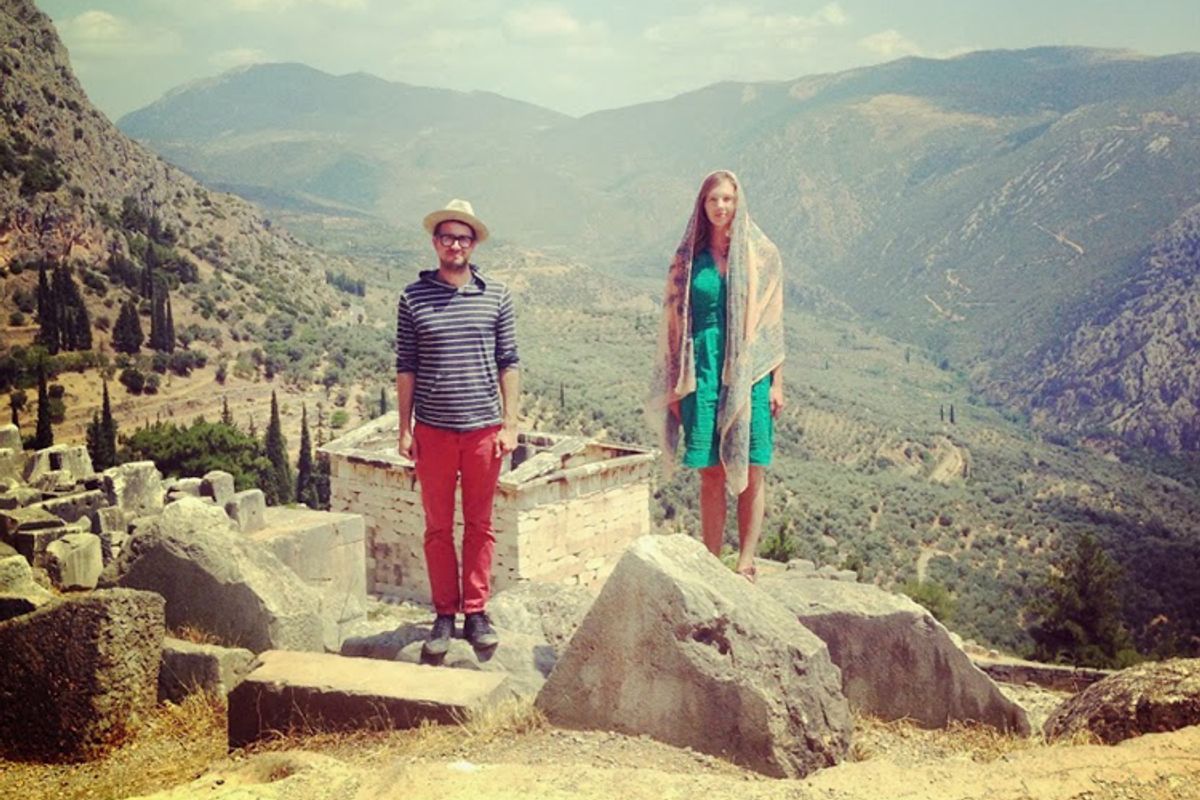 We’re standing on the side of a highway in Budapest, trying to hitch a ride. I’m elegantly dressed for a proper afternoon at the National Gallery in a green embroidered dress and a knotted cotton scarf. Jeff appears to have just walked off the set of a western shot in Brooklyn. His grandfather’s 1950s Stetson, cocked lazily to the side, is accompanied by a pair of fiery red chinos and a striped navy sweater. Both ensembles are looking a little threadbare and with good reason: We’ve worn them every day since we left the Houston airport nearly three weeks ago.

This is not your average OkCupid date.

“Should we start walking?” asks Jeff. Hungarian drivers are passing us by with expressions of bewilderment, and we’re determined to get to Sarajevo by nightfall. So, after an hour of no takers, we decide to test the gods by beginning the 350-mile journey on foot. We make it about 10 steps before a Good Samaritan in a rusty red Peugeot takes mercy on us and pulls off the highway.

He plays a game of Tetris with the 15 strawberry crates in his trunk, eventually resulting in two narrow canyons of space, just big enough for our bodies. He waves to us and we gratefully wedge ourselves in, only to find him looking at us with a furrowed brow. He appears to be hosting an internal wrestling match with the English lexicon. Finally, he finds the words, “Where are bags!”

This is Jeff’s favorite question and his reply is delivered with practiced flair. “You ever met anyone traveling with no stuff?” My grasp on good, old-fashioned reality is not terribly robust. I wouldn’t be surprised to wake up inside a Salvador Dalí painting or an interplanetary episode of "Doctor Who." Yet, despite my surrealist leanings, even I was a bit startled to find myself hurtling toward the Croatian border with no bags, no change of clothes and no clue what was going to happen next. What bizarre chain of events had led to this scenario?

In some ways I blame Jeff. The warning indicators were flashing red-alert red from the moment I saw the oversize Mexican mariachi bow tie in his OkCupid profile picture three months ago. This guy was trouble of the best variety.

On the surface, we appeared to be sure candidates for “World’s Most Unlikely Pair.” He’s a wildly energetic university professor who is always on the move. I’m a reclusive writer who spends hours identifying new constellations in the ceiling paint. He can strike an insta-friendship with any human not in a coma. I often pretend I don’t recognize people at the grocery store. Somehow our personality differences are offset by the fact that the same mad scientist blood flows through both of our veins. We live for the unexpected, the experimental and the subtly disruptive.

Never one to waste time, Jeff set an experimental trap weeks before he knew my real last name or whether I actually looked like the pictures in my OkCupid account. His third email was coy: “Do you have any ideas for travel experiments? I have a few things I dabble in, and I’m going to push one of these experiments to the nth limit in June.”

“Dabbling” referred to his traditional method of travel, which involved booking an outbound flight to one international airport and an inbound flight out of some other port-of-calling a few countries away. Beyond visas and flight details his trips were completely unstructured. No hotels and no itineraries.

Oh yeah, and the newest nth limit twist: no stuff. No stuff? As far as habits go, I’m a pretty standard American woman. I shower regularly, I like clean clothes, and it’s a rare occasion where you can find me looking disheveled. I’m not gonna lie: The thought of ultra-minimalist travel was initially disturbing. I imagined myself stumbling through Byzantine masterpieces with greasy hair and a foul, beer-stained dress equipped with the power to repel all tourists in a 10-foot radius. Hell no. And yet, the idea of moving completely unencumbered through space and time was tantalizing. Even nightmares of unkempt leg hair couldn’t completely banish the thought. What would it be like to say no to heavy backpacks full of coordinating outfits, Lonely Planet travel guides, and cheap souvenirs? What would happen if I navigated all of my needs in real time?

In the end, I succumbed to curiosity and signed my name to the no-carry-on dotted line. I was in. Exactly one month and two weeks after meeting online, Jeff and I nervously booked two luggage-free flights to Istanbul. This was either the best idea ever or the beginning of a brutal, three-week long demise. As Mark Twain so aptly put it, “There ain’t no surer way to find out whether you like people or hate them than to travel with them.”

“What will you wear when you’re washing your clothes?” The flight attendant’s concern cycled through my head on repeat as we touched down in Atatürk Airport. She had whispered it dubiously, like a disapproving mother. The truth was, I had no idea what I would wear when I was washing my clothes. I didn’t even have soap, let alone a modesty backup.

The night before we left Jeff and I had painstakingly cataloged the items we deemed crucial for our 21-day journey. Passports, credit cards and iPhones made the cut, as did a small notebook, a toothbrush and a clipped map of the Balkans.  Jeff stuffed his core items in his pockets. My dress lacked adequate pocket space, so I substituted with a small shoulder purse that allowed me space for a few additional toiletries, an iPad Mini, and the awkward-looking retainer I’ve been wearing since my braces came off 10 years ago.

Jeff packed in 2 minutes and 31 seconds flat. I inched along at the slothly rate of 8 minutes. With a combined prep time of 10 minutes, we were off to the George Bush International airport. Jeff and I are both experienced travelers, but neither one of us was prepared for how surreal it would feel to stroll into an international terminal with no itinerary and nothing to hold on to. I swear I experienced phantom shoulder pain from past heavy-laden backpack adventures. It was liberating. It was terrifying.

Our no-luggage journey began with the buzzing protest energy of Istanbul and from there it zigzagged wildly across the European continent. There were no plans. With no stuff, moving to the next destination was as simple as getting out of bed and pointing to a dot on the map. We jumped from city to city using almost every mode of transportation on earth: an old train along the Turkish coast, a giant ferry across the Aegean, a cramped bus through the Balkans, a series of hitches through Croatia, a flight to Edinburgh, and a pair of bikes in London. From baristas and dancers to investment bankers and Cambridge professors, we wandered the streets with guides who were as varied as the urban landscapes we were moving through. When tired we surfed on couches, floors, park lawns and a real bed or two. When hungry we grazed on street food, cafe fare and the occasional home-cooked meal. When curious we drifted in and out of crowded bazaars, empty churches, political protests, and ancient ruins. When washing our clothes we wore scarf togas, bed sheets, towels and borrowed T-shirts.

After a few days of wearing the same dress I realized that my initial fears of dire uncleanliness were unfounded. Soap is a fairly universal concept. If I was dirty, I took a shower wherever we were staying. If my dress began to smell a little earthy, I washed it in a sink or a washing machine before I went to sleep. It was really that simple. The same thing applied to toiletries. All I needed to feel attractive and put together was deodorant, a toothbrush, and some light cosmetics.

Neither Jeff nor I wanted an around-the-world adventure in suffering. We like to eat, sleep and travel well -- just like everyone else. Many people interpreted our experiment as a radical act (à la John the Baptist’s honey and crickets survival diet), but it truly wasn’t designed to test how much deprivation we could endure. We were curious about whether we could enjoy a journey just as much -- or even more — when we eliminated the tourist agenda and most of the material trappings. What we discovered was that after a certain base level was met (water, food, shelter and a fully charged iPhone), decreasing the number of possessions did little to affect the quality of our journey. What we lost in souvenirs, we gained in unprecedented freedom of movement and an unbeatable conversation starter. In the end, Jeff and I didn’t make it to Sarajevo by nightfall. We did, however, make it by 1 a.m. Strawberry Samaritan dropped us at a rural Croatian border crossing where we walked across, papers in hand. Soon after we were picked up by a Sean Connery look-alike who informed us that he worked with wines. Wines turned out to be a mistaken translation of mines. We discovered the error when he parked his Subaru and walked us to a barbed-wire fence laced with warning signs that left no room for mistranslation.  Sobered by the minefield tour, we continued our journey south with a meditative tank driver named Igor, his name a literal remnant of the Soviet era.

Igor put us on a bus to Sarajevo after an approaching wall of clouds clearly signaled the end of hitchhiking. From the rainy bus window we watched the pastoral fields of Croatia abruptly shift to the unearthly, shelled-out landscape of northern Bosnia-Herzegovina. The bus, which should have been retired in the Cretaceous Age, waited until darkness had settled before repeatedly flat lining in the middle of the road. No one balked. In fact, the distinctive camaraderie of strangers emerged. Laughter rippled through the seats each time the lights flickered and the engine died. A round of cheers followed when the driver cranked it back to life. Surreptitious bottles of beer were passed from seat to seat and chocolates emerged from nowhere. I have no idea how we made it to Sarajevo, but I do know that that day embodied everything we set out to learn from our experiment.

We ended our journey after eight countries, 3,500 miles and 21 days in the same clothes. Our romantic relationship intact, Jeff and I boarded the Heathrow return flight as closer friends than ever (despite the questionable state of our undergarments). Materially speaking I was as empty-handed as the day we started, but I actually carried a great deal back home across the Atlantic. Traveling with no luggage and no plans was much more than a minimalist lesson in living well with less. It was an intense, in-your-face invitation to the unknown. There’s a truly magnificent side to the unknown, but we aren’t taught how to welcome it, let alone explore the breadth of its possibilities.

Did our luggage-less dance with uncertainty lead to some kind of travel nirvana? Yes and no. We careered through time and space at a fiendish pace and experienced all the blood, sweat and exhaustion that might be expected. At the same time, we were vividly present in the midst of a disorienting cloud of city grids, metro stops and incomprehensible dialects that shape-shifted with every border crossing. We were alive. And every so often the intensity was punctuated with time-crushing moments that were so staggeringly beautiful and strange that even now I’m not sure they occurred at all. Clara Bensen is a writer based in Austin, Texas currently writing a travel memoir, "No Baggage," based on her many adventures with Jeff. You can follow her on Twitter @clarabensen