Trust Me on This: Perfection will make you miserable. Go make mistakes!

Dad's advice about perfection built my work ethic, and led to my unhappiness. Here's what I'll tell my kids instead 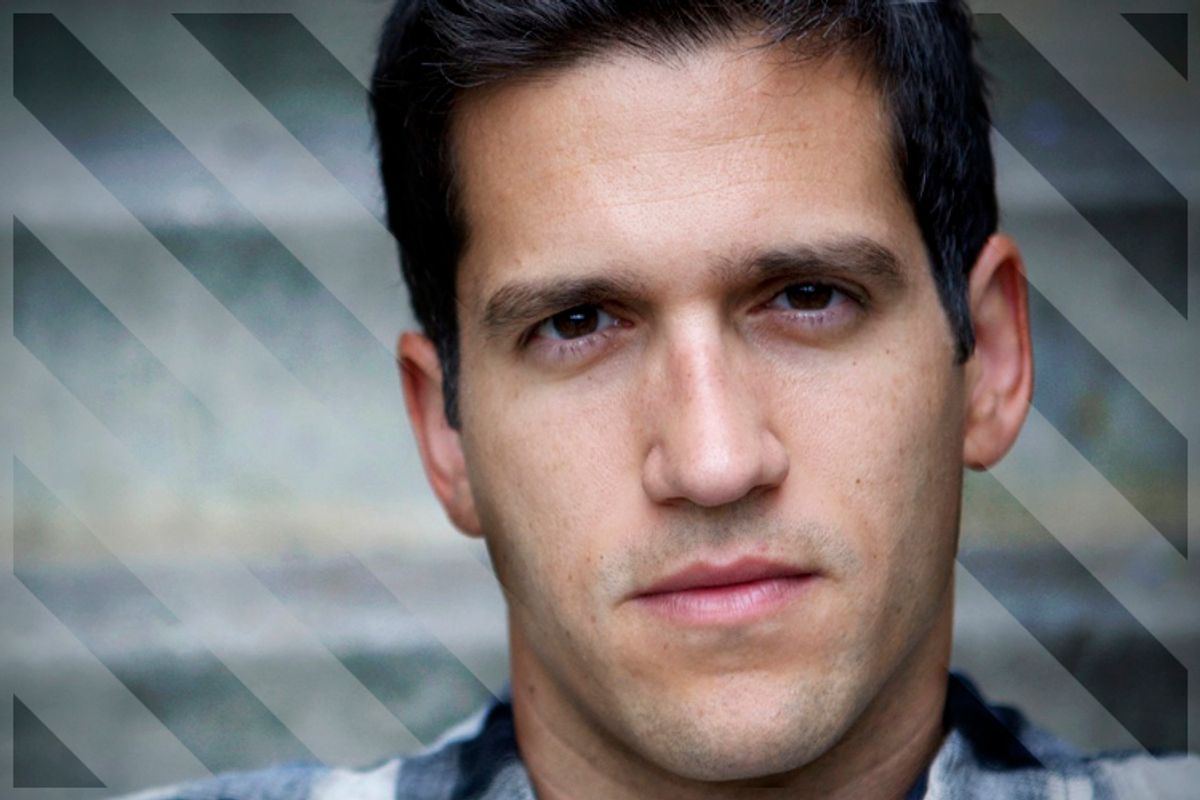 As your father I have certain responsibilities, which are by now no doubt familiar to you: to help house, feed and clothe you; to pace the hallway, repeatedly checking my watch and sighing when we’re running late for a family activity; and to lock myself in the bathroom and roar like a mountain lion if anyone approaches the door for the next half-hour.

There is one important paternal responsibility, however, with which you are probably unfamiliar — and no, it is not to nod benignly while you tell me yet another animal fact during the morning walk to school (Mathilda’s fact No. 527: dachshunds were first bred to fight badgers — no way!) or to hunch over a slice of pumpkin pie and eat it with such noisy delight that you will never want to invite friends over, for fear that witnessing the event will cause them to throw up. It is to dispense advice. Ever since I read the final passage of John Cheever’s "The Wapshot Chronicle" as a young man, where the titular patriarch hands out posthumous counsel on how to smoke a cigar, I have looked forward to this day.

It seems appropriate to begin by sharing the three central pieces of advice that my< father gave me. As some background, your Papou, despite his playful-sounding name, was not an especially playful guy. He had his lighthearted moments, like singing along with the Rice-A-Roni jingle when the TV commercial came on, but by and large his demeanor was serious. He worked all the time at our family restaurant, from 8 in the morning until 11 at night, seven days a week, and so it’s no surprise that his advice stressed industry, dedication and persistence above all else.

If you’re going to do something, do it right. Had Papou been a robot, this would have been his prime directive. He repeated it at least once a week when I was a boy and until my early 30s I never questioned it. It possessed what seemed an unassailable moral quality. Righteousness was built into it like the helical groove in a gun barrel. I owe much of whatever professional and academic success I have achieved to the earnest exactitude stressed by this advice.

I also owe it most of my unhappiness.

It is easy, almost inevitable, to go from trying to do something right to trying to do it perfectly. And the pursuit of perfection is the practice of dissatisfaction. The fiercely unforgiving eye with which you assess the weaknesses and failings of an undertaking will eventually learn never to blink. When you think you’re furthering excellence and self-discipline, in truth you’re furthering anxiety and self-recrimination. Nothing will ever be good enough. You’ll train yourself into a state of obsessive disappointment: with your academic and athletic achievements, your girlfriends or boyfriends, your career, even and especially your own behavior.

So allow yourself to make mistakes — stupid, awkward, bold mistakes. You’re not a self-correcting algorithm, you’re a person, and the sooner you set aside a drive for mechanical perfection and all the timidity and cowardice that it encourages, the sooner you might do something you’re actually proud of. Now I’m not counseling the embrace of sloppiness, idleness or indifference. Try hard, by all means, excel and succeed — but forgive yourself when you come up short. Have some compassion for yourself. And keep it in perspective: not necessarily the heart-stopping reverse telescope of your cosmological insignificance, but that over the span of a life, disappointment and failure are common. Try to take pleasure in the experience of a thing without obsessing over its imperfect end state. It isn’t easy. I struggle with it daily. But the alternative is a wearying estrangement from gratification, risk and exploration.

Papou’s second piece of advice, and a thematic cousin to his prime directive, was Always finish what you start. By the time you read this, you may have already spotted this truism on motivational posters and stitched onto pillows in musty New England antique stores. It is fine advice if you are a surgeon or a bomb disposal specialist but otherwise an indiscriminate obedience to this doctrine will ensure that you waste much of your life.

Again, I feel a point of clarification is necessary: I’m not urging you to bail out at the first sign of difficulty. Just the opposite — perseverance and consistency are critical factors to accomplishing anything. And accomplishment of some sort seems a key aspect to attaining a sense of satisfaction (at least if you’re carrying 50 percent of my genetic material). What I am urging is to avoid thoughtless inertia, the careerist or sentimental momentum that leads to years lost in professional pursuits and personal relationships you knew to be ill-fitting. I’m stressing perception and courage here, not a predisposition to abandonment. Just remember that it is often easy to mask a fear of change or conflict with a seemingly stoic persistence to see something through.

Your grandfather’s third piece of advice was: Never trust anyone outside of the family. I will admit that this sounds like something out of a mafia movie but let me assure you that your Papou was not a criminal. He was highly principled, in fact, and whenever my sister and I would flirt with dishonesty he would stare at us with his dark thunder-God eyes and bellow, “You can’t lie to me! I know when someone’s lying! I should have been a judge!”

This last piece of advice was the first of his that I questioned. I was 9 years old and still in the thrall of father worship — when dissent, let alone defiance, seemed unthinkable — yet the logical hole at the center of this edict just could not be ignored. I was willing, I supposed, to write off the near-entirety of the human race at my father’s urging … but what about Mom?

“Your mother?” my father said. “She’s family. Of course you can trust her.”

“What are you talking about?! She’s my wife.”

“But not always. Like, before she was your wife she was just … your friend. Then you married her and she became your wife …”

My father stared at me with his heavy, hooded eyes as I tiptoed toward my closing argument.

"So at one point you decided to trust her enough to make her family. Right? Which means you can trust people who aren’t fam--”

“Forget it,” he said, wearily shaking his head. “You don’t understand.”

How could I? I was not my father, who had come to America as a 19-year-old, alone and with nothing, that archetypal immigrant story in which through hard work and doggedness he gradually achieved success — all while enduring belittlements, disappointments and betrayals. I was a middle-class American boy who had been treated like a prince since the day he was born.

Despite my initial rebuttal, I often found myself preoccupied by my father’s advice to never trust anyone outside of the family. It possessed a fearful insularity but it demanded respect. As I got older, entering my teens and early 20s, love and its inevitable betrayals confronted me, and with each clumsy heartbreak, regardless of who was at fault, my father’s cautionary decree returned to me. Ironically, the more unreliable I became, the more I renounced my faith in others. Apprehension, then skepticism, then cynicism hardened me.

And now it’s time to share the most urgent piece of advice that your grandmother, Yiayia, gave me. Roman and Adele, sadly you won’t remember your grandmother like this, but she was a tiny, dynamic woman whose ceaseless adulation for her family was tempered by a lucid pragmatism learned growing up on a farm in the Peloponnesus. (Once, when I complained that life was unfair, Yiayia interrupted me with: “Of course it’s unfair. Did I ever tell you otherwise? Please don’t expect fairness.”) The most important decision you’ll make is whom you marry.

My mother repeated this often and I never paid any attention to it. I didn’t care about marriage; it seemed a mere domestic inevitability, stripped of the glory a boy dreams of. But she was right. The woman I fell in love with and married, your mother, was the corrective to the fearful and suspicious disengagement that had overtaken me. It was neither an immediate nor a complete reversal, and it still requires, in many ways, the kind of ordinary yet wearying effort that my father exerted as he toiled in the restaurant every day. It has never been easy for me to express myself, especially to those closest to me, and it is no accident that I have chosen an essay, rather than a conversation, to disclose such vital and intimate matters to you.

When your grandfather died sadly and prematurely only months after your grandmother suffered an incapacitating brain injury, I was devastated. I had experienced my share of sadness in 36 years, but nothing like this. I flew to Greece for my father’s funeral while your mother stayed home to take care of you three. In the village where the service was held, I was surrounded by aunts and uncles and dozens of cousins. Despite this, I felt a penetrating solitude. This was my family yet they didn’t know me. The people who knew me were my wife and my children and my trusted friends 6,000 miles away. I struggled with this unsettling feeling throughout the trip, and whether it validated or invalidated the advice my father had once given me, I really don’t know … and maybe that’s my most significant piece of advice to you. Let yourself feel whatever it is you’re feeling, however unwelcome or unflattering it may be. Don’t push it away with urgency and routine, with chasing after perfection and always finishing what you start and the many other behavioral heuristics that bypass emotion, reflection and reorientation. I watch you now, at 4 and 9 years old, in wonder and delight, admiring your wildness, the way you swing from giddy extremes as you try it all. Whatever you do, children, resist the demand to automate your life.

The day after the funeral I woke up early and walked alone through the village. It was late autumn but cold enough to see my breath. Near the church where your mother and I had baptized you and where the rites had been read for Papou I startled a mob of feral cats rooting through the trash. They scrabbled out of the bins and lunged toward the safety of the trees. Streaking through the olive grove, they split apart but then slowly, gradually, like the tributaries of a river, came together again.

Panio Gianopoulos is the author of the novella "A Familiar Beast."

Tmot Trust Me On This