UPDATED: Three students were shot and injured, multiple "persons of interest" in custody 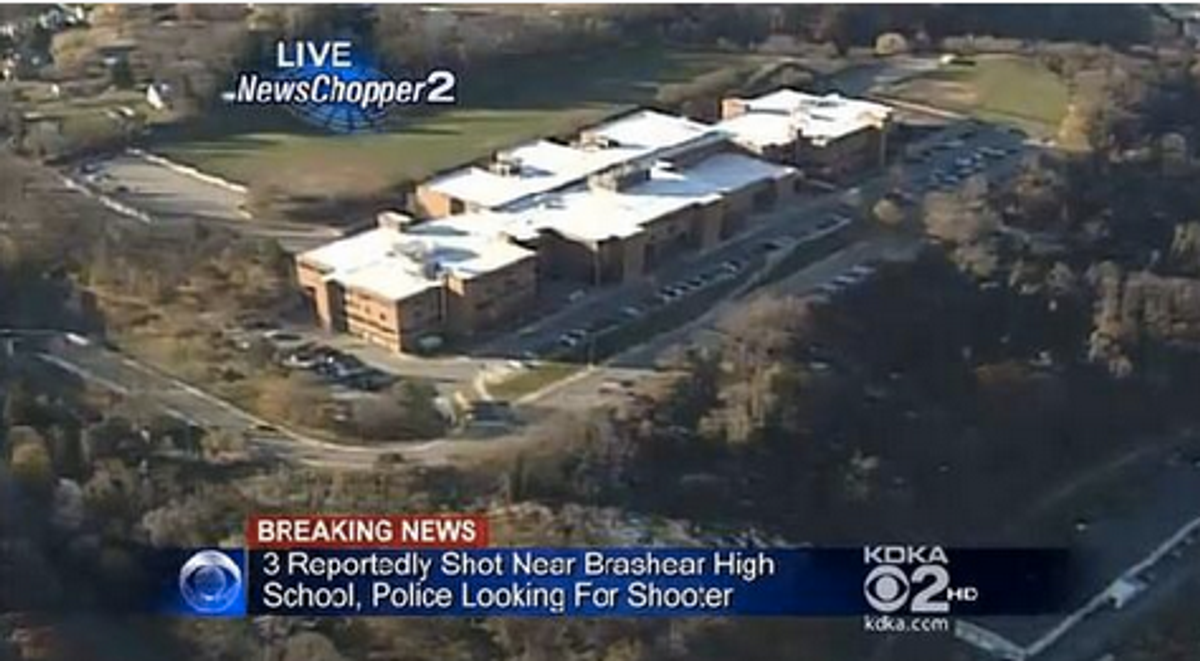 Updated 5:46 p.m. EST:According to WPXI the active search for shooters is now over and a number of individuals -- as yet unnamed and uncharged -- are in custody.

Updated 5:09 p.m. EST:Police are reportedly still on the search for suspects and local residents have been advised to stay indoors. However several people have been taken into custody as "persons of interest" in the incident.

Brashear High School, located at 590 Crane Ave. in Beechview in the South Hills, is a magnet school for computer science. Its enrollment is 1,416, according to the Pittsburgh Public Schools website. In 2010, U.S. News and World Report awarded Brashear a Bronze Medal in its America's Best High Schools list.

Updated 4:06 p.m. EST: Authorities have now confirmed that police are seeking three shooters in the woods behind the school. Homicide detectives commented that the shooters were males wearing all black.

Updated 3:53 p.m. EST: None of the three victims appear to have life-threatening injuries, according to reports.

One of the victims is a 17-year-old male who was grazed in the head by a bullet. He has since been taken to a local hospital and is believed to be in stable condition.

According to school officials, a shooter came out of the woods near the school and shot three students on Crane Avenue near the high school.

Original post: Early reports are emerging of a shooting outside Brashear High School in Pittsburgh. Police can confirm that at least three people have been shot.

Officers are currently searching for the shooter in nearby woodlands.

Via The Tribune Review:

At least three people were shot just before 3 p.m., police said. Two of the injured ran into the high school and school officials locked the buildings down, officials said.

One of the injured was taken to UPMC Mercy Hospital, Uptown, and another was taken to Allegheny General Hospital on the North Side. The extent of their injuries wasn't known. Paramedics are treating a third victim, who has a gunshot wound to the leg and was found lying on Lowenhill Avenue near the school, emergency dispatchers said.

Police and K-9 units are searching the woods nearby for the shooter and have closed off several nearby streets including Crane Avenue and Dagmar Avenue.