And not for religious beliefs or lack of opportunity. I decided to wait for a simple reason: Because it feels right 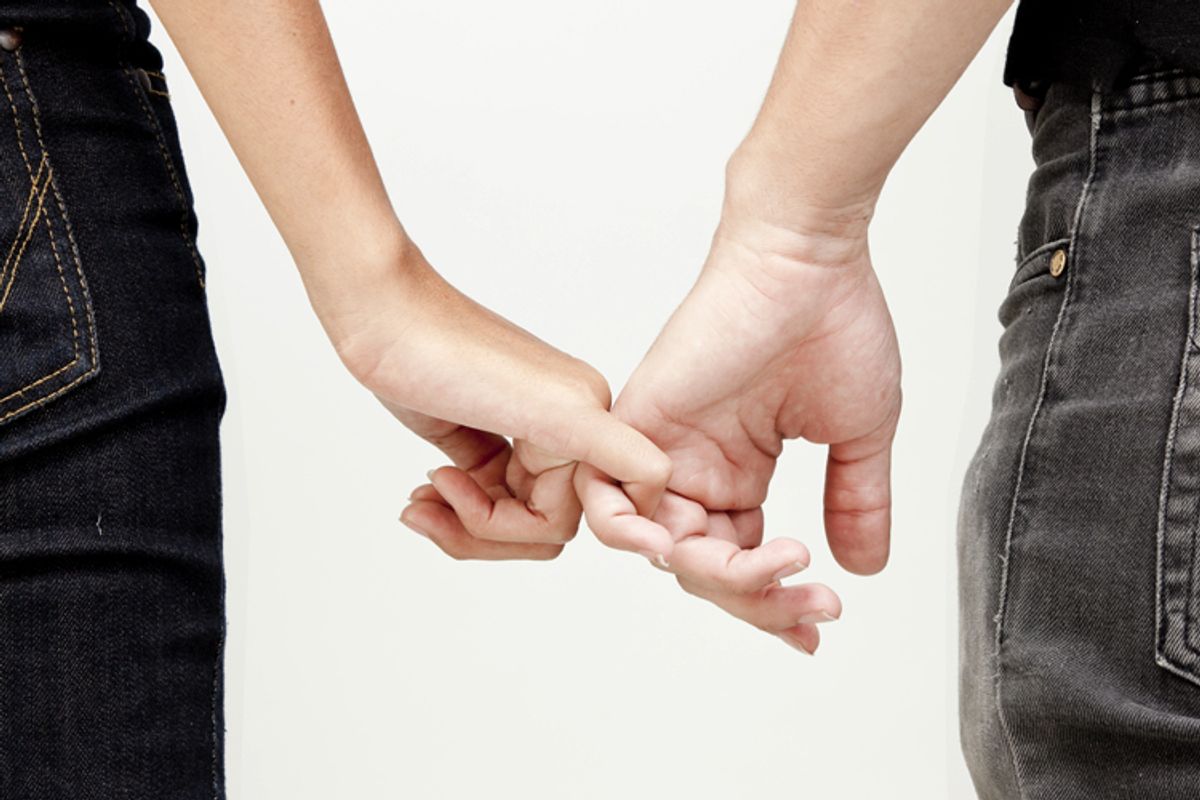 I'm a pretty typical 26-year-old male. I've been to more than 150 rock concerts. My father and I watched Tiger Woods win all 14 of his major championships. I have a few tattoos. Like most 20-somethings, I'm working on finding myself, whatever that means, and I’m swimming in student loan debt. But I am unique in one way, and it's not my red hair.

I have never had sex.

It’s not because I haven’t had a girlfriend. All through high school I dated someone, or chased someone depending on whom you ask. For the past four years, I've been with the same girl, and we’re getting married in the summer of 2015. She's a 24-year-old wedding photographer who's also never had sex. It's no wonder we found each other, right?

What might be even more surprising is that we aren’t abstaining because of religion, rebellion or any kooky anti-sex group. It’s actually a decision I made all by myself.

Maybe it started in my adolescent years, when friends would talk about women they’d had sex with as if it were a game. That made me feel uncomfortable. I was all for exploring my sexuality, but it seemed to me that people were too casual about it. This is the deed that creates life, after all, and I took it seriously. I knew, even then, that I only wanted to experience its joy and pleasure with one person, and not until we were ready.

When I got together with my fiancée, I knew she was a keeper. But we wanted to play it safe while we work on establishing ourselves as well as a photography business, which will hopefully provide a better life for future children. Yes, there are many forms of healthy protection, but none is greater than abstaining. In addition to being a full-time wedding photographer, my fiancée is also a kindergarten teacher, which is a form of birth control itself. Teachers know what I’m talking about.

Obviously my views on sex put me out of step with my time. Sex is a marketing tool for just about anything these days, and a common sentiment is that sex can be a deal-breaker in a relationship, meaning that a key factor in compatibility is two people sleeping together. I don’t see anything wrong with that line of thinking; I just don’t share it. All I’m asking is that people respect my side of the argument, too.

Sex doesn’t define my relationship. Just because there's no intercourse in my life doesn't mean there's no love in it. And it certainly doesn't mean there's a lack of intimacy, or sexual behavior. I still find it bizarre how people pair sex with love, as though they are interchangeable. When my parents taught me about the act, they started the discussion with the famous words, "When two people love each other …" But I will not use those words with my children unless they're followed with "… they respect each other."

An important point I must bring up is that I want to have sex. I can't wait to have sex. Frankly, my fiancée and I will have sex whenever we decide to -- whether it’s before our wedding or not -- and when that day comes we will deal with the ramifications, good and bad. But I don’t feel that there’s anything missing in my life right now for not having it. What I hate is the attitude that sex is everything, some all-powerful force that means the same to everyone, and that’s just not true. Sexologist Isadora Alman writes in Psychology Today, “So, how important is sex to a relationship? It absolutely depends on its importance to each of the people having the relationship."

I’ve been fairly private about my abstinence. My best friends know, but acquaintances probably assume that at my age, I have been there, done that. People who give me a hard time for it are usually middle-aged men with a deep love of fried food and Vin Diesel. Or it’s people my age with a handful of “serious” relationships in their recent history, preaching that sex is a must for getting closer and staying together.

Whenever sex gets brought up during a break at work, or when out I’m out with friends I only see every other weekend, I either lie or sidestep the topic. Well, I simply don’t care anymore. I want to free myself from lying to fit a false agenda of what it means to do normal things in a fickle society. It’s 2013 and I still can’t dust, do laundry or scrub dishes in peace. There are men who still refuse to do any of these tasks and will make fun of other men for doing them. They’re probably the same guys who think truck nuts are cool.

And I’m not interested in changing their minds. But I do feel the need to speak up for people who also want to wait to have sex. For so long, I’ve felt ashamed of my beliefs. But we walk among Nickelback fans, people who believe reality television is “real,” and people too immature to handle gay rights.

So I’m writing this because I care about other people like me. If you haven’t had sex yet because you’re not ready, you are not weird. You don’t need to get laid. Find a group of people who let you feel at ease with the decisions in your life. The friends I met later in my teen years understood my views on sex, and to this day have never asked why. All of us are still best friends because empathy and respect is the framework of our relationships.

It takes courage to stand apart from society, but it’s worth it. This world is too beautiful to waste worrying about what we’re supposed to do to fit in, especially when it comes to one of our most personal acts.

James Layne does freelance work for Indianapolis Monthly, contributes at thehudsucker.com, and photographs weddings with his fiancé, Emily. Follow him on Twitter @JamesIvanLayne.