Meet the black female comic who dominated her era 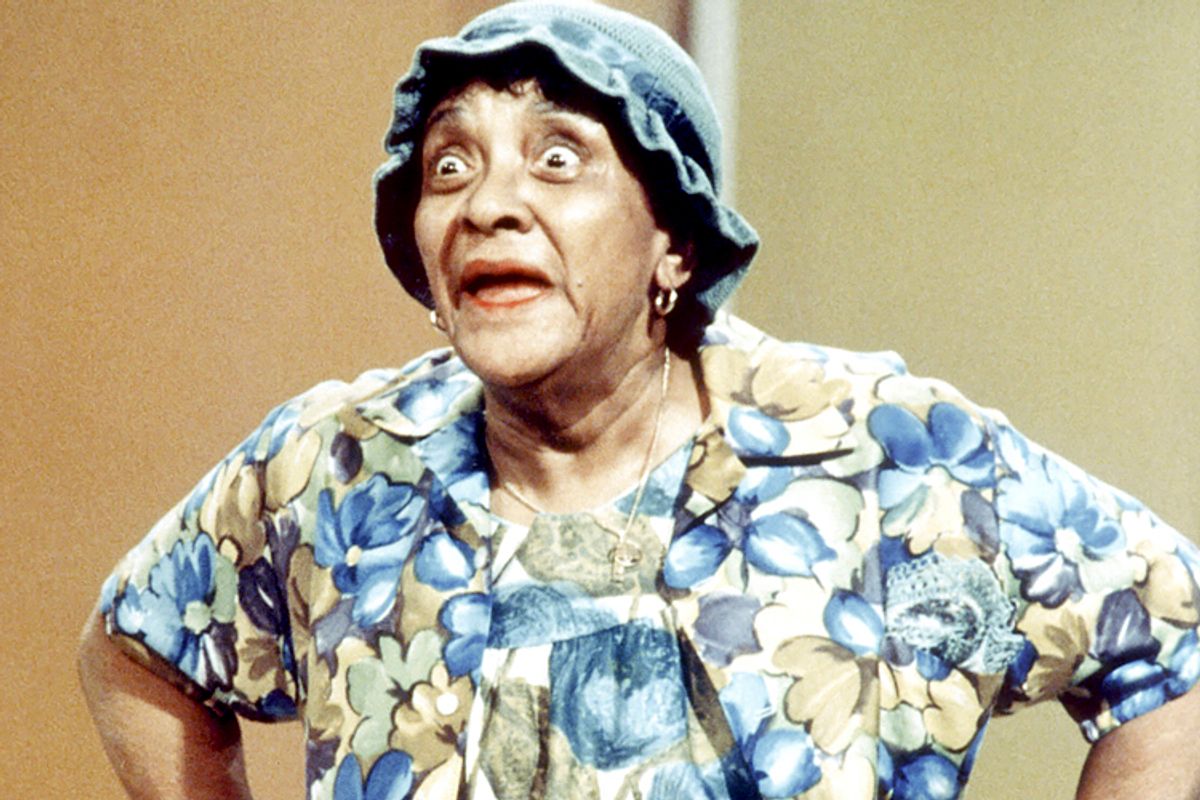 In the aftermath of the recent controversy surrounding "Saturday Night Live's" apparent inability to track down and subsequently employ any black female comics, it's probably worth tuning in for the HBO documentary "Whoopi Goldberg Presents Moms Mabley" premiering this coming Monday. Mabley, born Loretta Mary Aiken in Brevard, N.C., was a comic and all-around entertainer whose career began on the so-called chitlin circuit and went on to span several decades. Sold-out live appearances, best-selling recordings and high-profile television appearances all told, Moms Mabley was -- relative to her era -- one of the most successful female comediennes of all time, black or white.

Goldberg, obviously a pioneering comic force in her own right, makes her directorial debut with this special. "The View" co-host appears in many scenes interviewing and nodding along in agreement with other comedy stalwarts like Jerry Stiller, Eddie Murphy, Kathy Griffith and Bill Cosby as they sound off on Mabley's legacy and influence. Goldberg's presence in front of the camera seems a little forced and awkward at times, but her imprimatur is likely a necessity in properly conveying Mabley's significance to a viewing audience that may not be familiar with the comic, who died in 1975. Goldberg approaches her role as documentarian rather gingerly, allowing that hard facts about Mabley's past and personal life are tough to unearth, thus providing us with less biographical information than exists on the comic's Wikipedia page.

With no disclaimer, that website declares (and the New York Times also reported) that, "By the age of fifteen, Mabley had been raped twice and had two children who were given up for adoption." The HBO doc, however, only permits this as speculation by talking head, specifically Arsenio Hall. The same goes for the notion that Mabley may have been a lesbian, despite abundant suggestive testimony from someone who shared a dressing room with her. Considering that much of Mabley's comedy revolved around her somewhat superficial relationships with men -- old men, young men, shiftless men -- further exploration of this apparent contradiction might have been fascinating. Nevertheless, Goldberg's reasons for leaving things a little murky resonate sharply in the greater context of American history.

"It's quite a life she's had," says Goldberg when Hall brings up the subject of Mabley's tragic past. "And there are lots of rumors. When you look at Mom's history, I guess it's the history of black folks in America because all of the information is not there. So, I realized that I was not in a position to do a biography. But here are some things that I think we know for sure. Her real name was Loretta Mary Aiken. She was born in 1897 -- we think."

"Whoopi Goldberg Presents Moms Mabley" is not at all without insight. Goldberg uses the specter of Mabley's past and the conditions of her life as a woman in 20th century America to point us to the genius of her comedy. Especially interesting is hearing Hall, Robert Klein and Joan Rivers chime in on the deceptive power of Mabley's appearance. Despite the masculine clothes she wore off-duty, her onstage uniform was consistent throughout her career from the Royal Peacock in Atlanta to the Apollo in Harlem to Carnegie Hall: She was known by her broke-down hat, old housedress, and ill-fitting shoes. She shuffled, grumbled and garbled her English.

More than a visual gag, this entire "Moms" persona was Mabley's method of making herself non-threatening -- a tactic that even the most successful female comedians utilize in order to deliver their unique message in a male-dominated field. "People don't want to hear the truth," Rivers elaborates. "And if you are going to hear the truth, it's got to come from a homely lady, a lady that's no competition, a lady that ain't gonna take your husband, a lady that is OK, that you can trust because she's harmless." This insight strikes home as soon as you hear Mabley's subtle, irreverent commentary on civil rights and the political climate of the '60s.

Moms Mabley danced, sang and told jokes -- ideal for any variety show. But if "Saturday Night Live" had been around and searching at her peak, she probably wouldn't have made the cut because she only played one character. Her genius is that she played it her entire life and grew firmly into it to the point that she could tell an audience anything -- serious, silly or sad -- and it would ring true.