The TV show that makes me want to change my life

Why be a writer when I could be delivering animal babies like Dr. Pol? 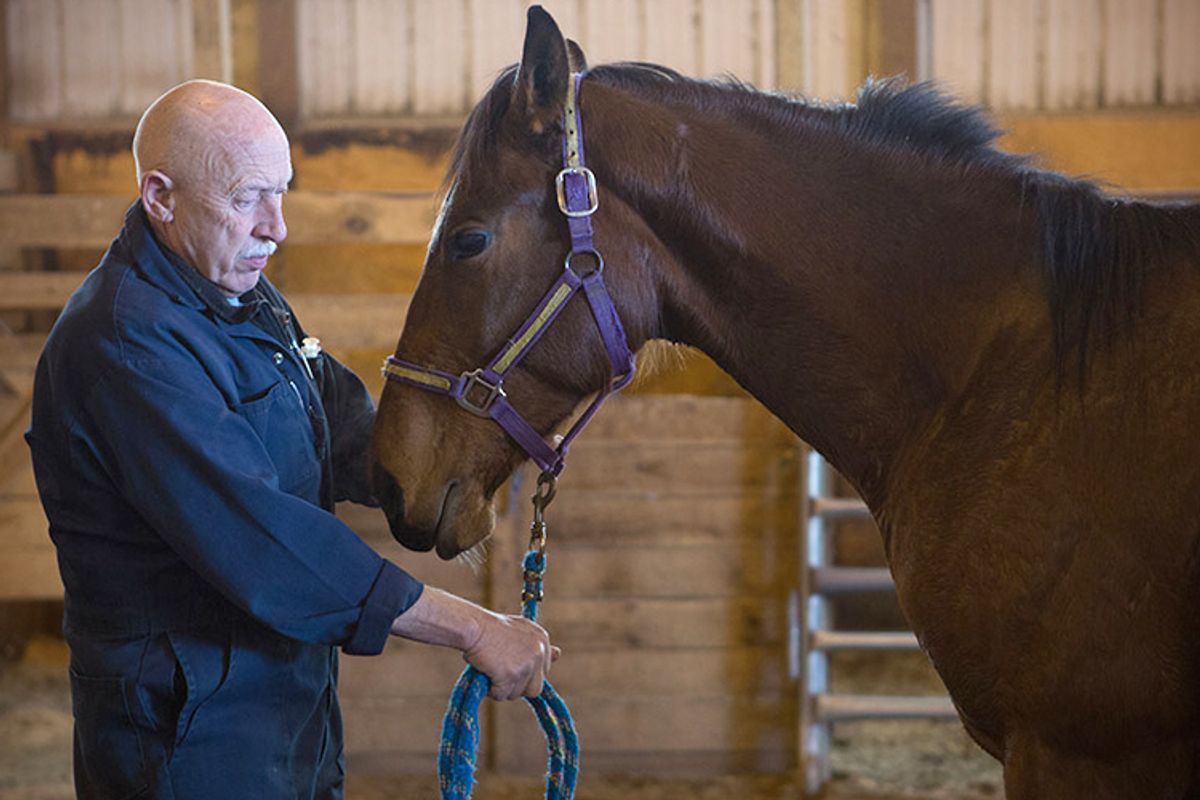 Dr. Pol standing with a horse as it dozes off from tranquilizer. (NGC/Michael Stankevich)
--

I watch a lot of TV. Bad TV, which might be an oxymoron if you’re snobby about TV or just don’t watch enough of it. I am not snobby, but I do have questionable taste. While other people were drooling over Season 4 of "The Wire," I still hadn’t heard of it. By the time "Breaking Bad" was over, I’d known about it for maybe two months. I've consistently passed over Walter White in favor of “My 600 Pound Life.” Or “Diners, Drive-Ins, and Dives,” which is the worst show I cannot stop watching. I have been known to watch six episodes in a row. In my pink and green pajamas, on a Saturday night in New York City. Out my window, people are laughing it up in the bars, having fun, having lives, but in my place, it’s all about potatoes and pork fat in a skillet. It’s tender, it’s juicy, it’s money, bro.

Lately, though, I’ve given up “Unique Eats” and “My Strange Addiction” and “How It’s Made,” and thrown in with “The Incredible Dr. Pol,” which airs on National Geographic Wild and is the station’s highest rated show. I happened on my first episode by chance (my cat stepped on the remote), as this old Dutch guy yanked something out of a cow while this other guy, younger and roly-poly in a blue polyester coverall, helped. These turned out to be Jan Pol, 72, and his son, Charles, on a standard farm call. Standard for them, but mesmerizing for me. I cannot believe the things I’ve seen this vet do. He’ll stick his hand anywhere. He is totally unflappable, though he does worry about getting mauled. Sometimes he even seems to worry about Charles getting mauled, which is as affectionate as Dr. Pol gets with his kid, though it’s enough.

Back at the clinic, there’s his wife, Diane, and colleague Dr. Brenda, who is stoic about her duties. She is less dynamic, but somehow more reassuring than father and son, though apparently, none of the vets is as competent as he seems. In 2010, the Michigan Department of Licensing and Regulatory Affairs found Pol and Brenda negligent in the case of a pregnant German shorthair whose 10 puppies died. But I do not want to know this. When Dr. Brenda untwists a cow’s stomach and its eyes are near tumbled out of its head like marbles, I don’t want to know that maybe Dr. Brenda should have given the poor lady some pain meds or anesthetic. I want to think she’s doing amazing work. Saving lives, sweating shit, sleeping well. In short, that she’s doing the exact opposite of what I have committed my life to doing.

It’s true we writers like to say that literature saves lives. That literature shows us who we are and who we can be, and highlights the difference between the two to profound effect. Books are a refuge; books are escapist; books are empathic. They can make you feel less alone in the world. They can teach you what your parents never did. As the writer Chris Kraus has put it: “Reading delivers on the promise that sex raises but hardly ever can fulfill—getting larger cause you’re entering another person’s language, cadence, heart, and mind.” I like the idea that reading makes you bigger. I especially like the idea that I am making this happen just for having written a book that finds its way into someone’s hands. But every now and then — and by this I mean all the time — I doubt whether this work is doing enough to change lives, forget trying to save lives.

Which is when, in the loop of bad feelings I can run ad nauseam, I stop whatever I’m doing to star in my favorite show of them all: “Shouldn’t I … instead?” Shouldn’t I go out and work at a homeless shelter instead? Shouldn’t I move to Michigan and save someone’s cow, which can mean saving, in addition, his livelihood, instead of writing another novel? How come I’m not steeped in afterbirth for most of my workday? At what point on the road to my life did I miss the turnoff for the practical and life-affirming?

Last weekend, I was on my couch, eating tortilla chips with fake cheese I bought at my local co-op (what is xanthan gum, anyway?), and feeling dispirited about the world and what little I’m doing to fix it. Meanwhile, Dr. Brenda was pulling puppies out of a uterus like clowns out of a car. Maybe nine in all, which seemed crazy. Nine mewling puppies in a row on a blankie in rural Michigan. Did I start weeping? You bet. Because it’s not like birthing puppies or cleaving tumors is going to stop the war in Syria, either. But it’s something. It’s a contribution you can quantify one beating heart at a time. Thing is, no way can I do what these people do, which I am reminded of whenever I turn on the TV, and which has the weird upshot of ratifying whatever ambitions I have to excel at what I can do, however abstract.

So there it is: “The Incredible Dr. Pol” manages to make me feel better and worse about myself at the same time. Which is a binary that captures, perhaps, the essence of what it’s like to be a writer: You feel better for trying, worse for failing; better for the compassion of wanting to inhabit other people’s lives, worse for the hubris of same. It’s a terrible but somehow addictive source of tension for me and, I’m guessing, for a lot of other writers, too.

Naturally, then, roll tape: I’ve got a few free hours, shouldn’t I stop watching back-to-back episodes of “The Incredible Dr. Pol” and get to work instead? Probably. Except today, they’re dehorning pygmy goats, which means the lifesaving work of literature will have to wait.

Fiona Maazel is the author of the novels "Last Last Chance" and "Woke Up Lonely." She is winner of the Bard Prize for Fiction in 2009 and a National Book Foundation "5 Under 35" honoree for 2008. She lives in Brooklyn, NY.