Why Lily Allen's "Hard Out Here" isn't a feminist anthem 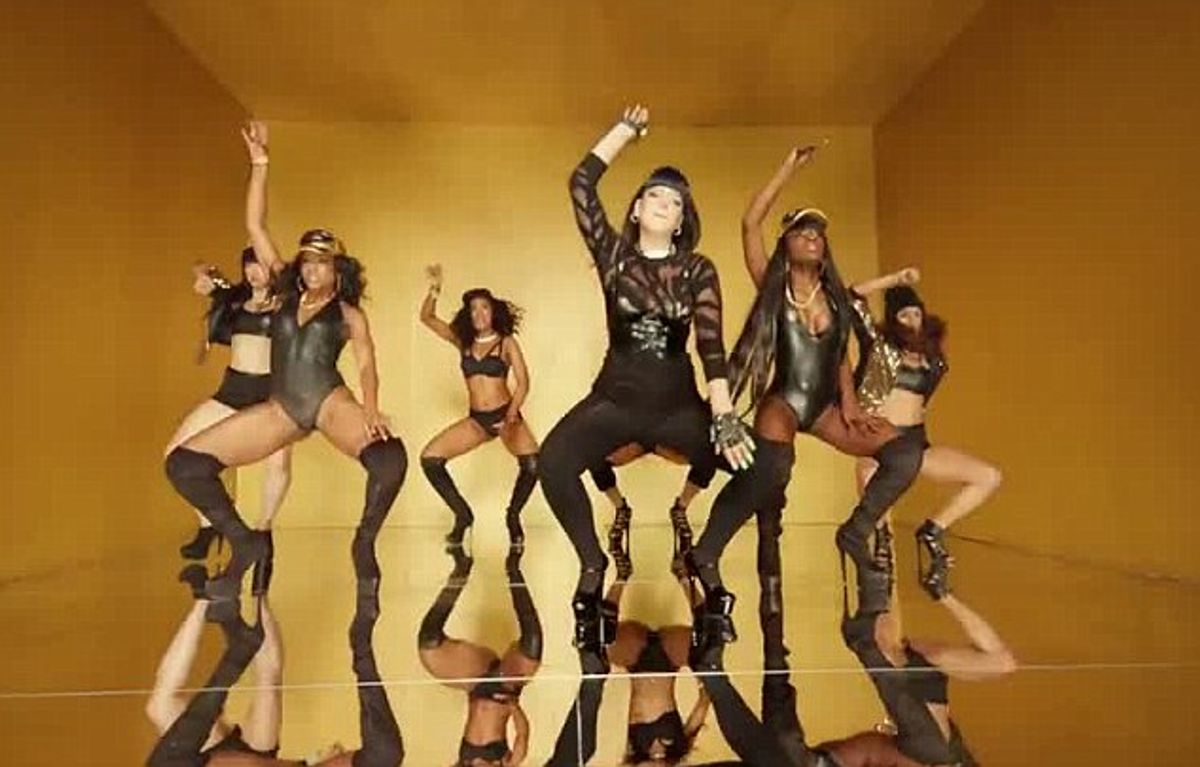 Lily Allen’s new single, “Hard Out Here” is incredibly ambitious and catchy as hell; I’m really glad to see a pop star trying to send a strong, feminist message to counter jerks like Robin Thicke, because sexism is a real problem that needs be be called out forever and ever until it dies deep within the mancave from whence it came. The only problem with Allen’s video, though, is that it undermines its own message.

In the beginning, we find Allen stretched out on an operating room table, silently protesting criticism about her weight from her old white manager. Then she fights back, singing, “I suppose I should tell you what ‘this bitch’ is thinking/You'll find me in the studio and not in the kitchen/I won't be bragging 'bout my cars or talking 'bout my chains/No need to shake my ass for you cause I've got a brain.”

The lyrics aim to ridicule common tropes perpetuated about women in pop music, and are supported in the video by clever references to other music: The repetition of the refrain “hard out here for a bitch,” is a reclamation of “bitch” as a term of power and a reference to Three 6 Mafia’s "It's Hard Out Here for a Pimp;" there’s also an amazing shout-out to Robin Thicke’s “Blurred Lines,” when Allen walks past balloons that spell “Lily Allen has a baggy pussy.”

But the parody gets messy pretty quickly -- pop music and hip-hop videos are already so over-the-top that it’s hard, if not impossible, for Allen to heighten the absurdity of the sexism at play in music. We see women licking various objects as phallic symbols and spraying themselves with champagne; there are gratuitous close-ups that reduce women to jiggly butts and crotch shots. I am pretty sure that every hip-hop and pop music video ever has done those things, and much, much more; doing that but slapping on a disclaimer that says, “Hey, this is what everyone else does, and isn’t that ridiculous? Men turn us all into asses and vaginas and boobs! Here, look at those boobs again! OUTRAGEOUS!!!” doesn’t really separate it from other videos that do that in earnest. It just stuffs it all in everyone’s face again, while simultaneously shaming women who choose to display their sexuality by choice.

What’s more disappointing about this satire-- and why it ultimately fails as satire -- is that, while Allen at least appears to be making a choice about her participation in this white man’s fantasy, she's also making the choice to objectify her mostly black back-up dancers. Jezebel’s Katie Dries, who overzealously called the song a “feminist pop anthem” disturbingly anticipates and then ignores the treatment of black women as ornaments, serving up the Thought Catalog defense of racism. “Allen's video is bound to be criticized by for her own use of mostly black backup dancers twerking,” writes Dries, “but the key difference here is that this is satire, however difficult that can be to pull off.”

Here, I am reminded of Jezebel’s own Lindy West, and her excellent denunciation of the “But it's a JOOOOOKE” defense of ironic racism: “Here's the thing about jokes. They only work when they're aiming up…People in positions of power simply cannot make jokes at the expense of the powerless.” In the context of Allen’s music video, where you have a famous female pop singer and anonymous dancers, the dancers are powerless, and are portrayed as such. That doesn’t sound like empowerment. In a conversation about the video in the Atlantic, Nolan Feeney sums it up well:

If I remember correctly, Lily Allen is a pretty clever and self-aware pop star, and it’s obvious from the balloons and the product placement that she knows exactly what conversations about pop music she’s parachuting into. But while she tries to point her finger at exactly how ridiculous and troubling it is when, say, Miley Cyrus, surrounds herself with black back-up dancers to sexualize herself and seem more exotic, it doesn’t ever seem like Allen really practices the sort of solidarity she preaches. I get that when she rips off the black body cloth and starts dancing, she’s positioning herself as one of them. We’re all in it together! “It’s hard out here for bitches like us!” But even when she’s dancing with them, it seems she’s still kind of making fun of them, or at least keeping her distance. Unlike Allen, they never stop playing up the bottle-popping, booty-shaking roles they’ve been assigned—roles she’s already condemned and rejected. For a song that deals with reclaiming ownership of your own body, she seems to be the only one that gets to do so.

With her lyrics and the concept of mocking a male-dominated industry, Allen’s “Hard Out Here” had an opportunity to really subvert the genre and do something cool and new to illustrate her point. (Like this effective parody of “Blurred Lines,” that switched the gender roles on us). Instead, Allen opted to just stuff some sexist shit into a box, wrap it in a bow that says, “The contents of this box are sexist, so fuck this box, but also, go ahead and open the box.” Lily Allen is smart enough and talented enough that she doesn’t need to repackage that shitty box. She can throw it out and make something better.