Bill O'Reilly is a transphobic bigot who is obsessed with sex

In yet another segment, O'Reilly's views about transgender young people reveal more about him than anything else 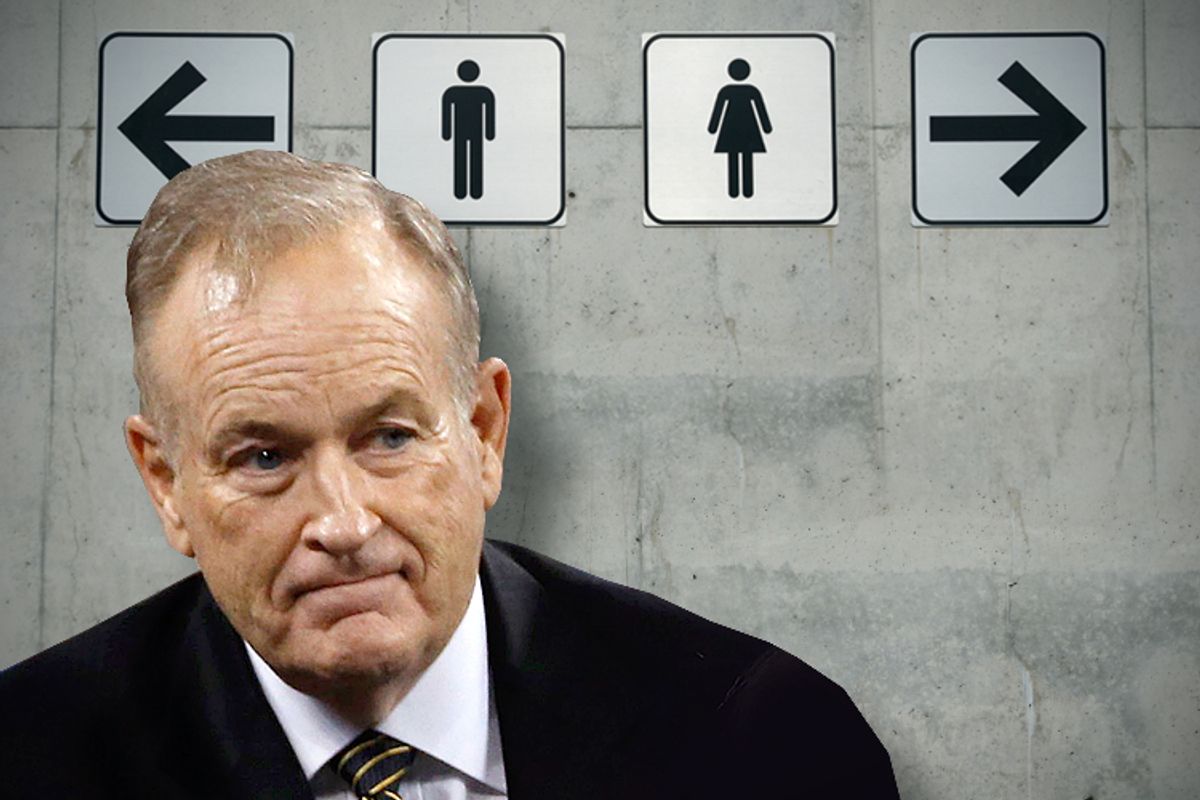 Earlier this week, Bill O'Reilly compared policies guaranteeing transgender students the right to use the appropriate bathrooms and locker rooms to adults bringing young children to Hooters. A couple of months before that, he called a California law that protects trans students' rights at the state level "the biggest con in the world," and boasted that he would personally use such a law as an excuse to sexually harass young girls in bathrooms. Further back, he likened transgender workers at a clothing store to "Ewoks" who would "scare the customers." All of these comments were followed by hearty laughs from O'Reilly and his rotating cast of guests, who all seem to agree that the very existence of transgender people is a really hilarious joke.

So it's pretty obvious that O'Reilly is a transphobic bigot. He also seems pretty obsessed with sex.

But O'Reilly's delusions about transgender people -- and primarily transgender children -- have nothing to do with real people (or reality, in general). What never gets mentioned during these segments is the fact that the provisions of the California law are actually nothing new. Schools across the country have had identical policies on the books for decades, and students have continued on with their lives, using the bathroom, playing sports and being kids, without incident.

The Los Angeles Unified School District has maintained such a policy for ten years without a single case of harassment. Ditto for schools in Illinois, Maine, Nevada, New Jersey, Georgia and the other states where these protections exist. Because these policies aren't about harassment or sex -- they are about safe and equal access to school facilities. For most people, allowing kids to use the bathroom is uncontroversial. But not for O'Reilly, who willfully depicts, time and again, transgender children as predators.

The target of O'Reilly's vitriol sometimes shifts from lawmakers and school administrators to parents of transgender children, but ultimately, it always ends up coming back to the kids themselves.

"I want to be sympathetic to people for whom trans people are new, but that doesn't mean you can victimize kids. You certainly shouldn't do it if you're a kid, but you really have no business doing it if you're an adult," Mara Keisling, executive director of the advocacy group National Center for Transgender Equality, recently told Salon. "The law in California and policies we have elsewhere in the country -- all they do is say that all kids have the right to an education, to be included in all of a school's activities and resources. It's not controversial. It's just fair."

In the same segment in which he called the California law a con, he declared that if it had existed when he was a teenager, "I would have been on every … California, man. If I come back and I am reincarnated ... and I'm a teenager? Bang… I'm out to California."

So it's clear that O'Reilly's bigotry has nothing to do with transgender kids themselves.

But joking about his own predatory instincts towards young women is still a bold move. Because, of course, O'Reilly not too long ago settled a harassment claim after one of his female producers accused him of repeated and unwelcome sexual comments.

An excerpt from one of the alleged exchanges:

You would basically be in the shower and then I would come in and I'd join you and you would have your back to me and I would take that little loofa thing and kinda soap up your back ... rub it all over you, get you to relax, hot water ... and um ... you know, you'd feel the tension drain out of you and uh you still would be with your back to me then I would kinda put my arm -- it's one of those mitts, those loofa mitts you know, so I got my hands in it ... and I would put it around front, kinda rub your tummy a little bit with it, and then with my other hand I would start to massage your boobs, get your nipples really hard... 'cuz I like that and you have really spectacular boobs.

So who, again, has the problem with unwelcome bathroom behavior?