Dudebros are sexually confused: Why their view of pleasure might surprise you 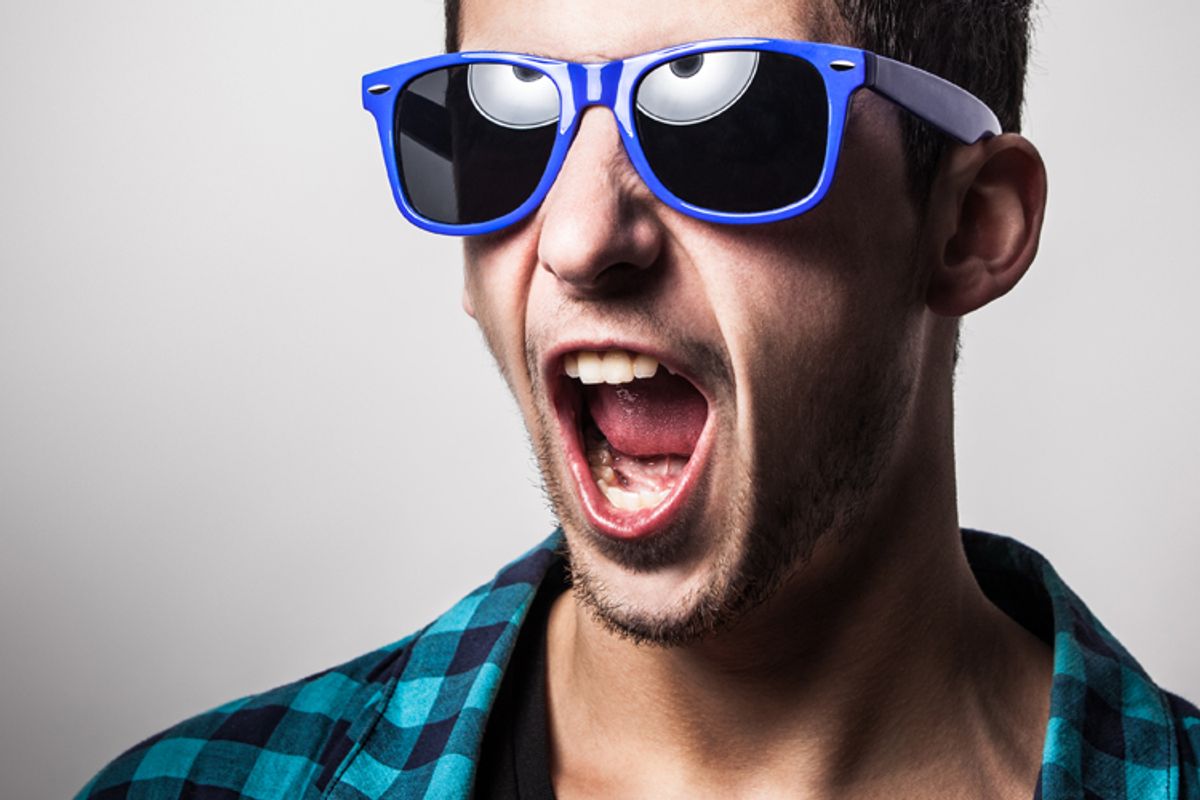 Trend pieces on hookup culture, of which there is a new one produced approximately every 15 minutes, generally fall into one of two categories. There is the "casual sex is a terrible thing that is ruining young women's lives" camp, then there is the "casual sex is an ambiguous thing that we don't fully understand but it could be ruining young women's lives" variety.

These stories mourn the death of courtship, fret about young women's alleged co-opting into the domain of no-strings sex, and search endlessly for the "winners" (men) and "losers" (women) in hookup scenarios. But rarely, if ever, do we talk seriously or without caricature about the young heterosexual guys who are supposed to be the great beneficiaries of hookup culture.

We don't talk about them because the sexual satisfaction and emotional profile of the dudebro -- if I may use the scientific terminology -- is pretty much assumed to be a known quantity, a parody of the worst tropes of masculinity. And while sexism and misogyny continue to shape so much of what men are taught about sex, ignoring the needs, desires and vulnerabilities of young men only allows those destructive lessons about sexual entitlement to fester.

We need to talk about the sexuality of young straight guys because, like all human sexuality, it is way more complicated than stereotypes would lead you to believe.

"The way we set up this conversation is often a very binary way of approaching and thinking about sex," Joshua Rosenberger, assistant professor of global and community health at George Mason University, told Salon. "We say, 'Oh, women are not experiencing pleasure in the same way as men,' and it brings with it the assumption that men are enjoying sex all of the time and these other hypermasculine stereotypes about pleasure."

The data on this is complicated. First of all, hookup culture is not as pervasive (or as X-rated) as the titillating headlines suggest. College students aren't having that much more sex than they did 20 years ago, and far from being a bacchanalian mass of young hedonists, research indicates that fewer than 15 percent of college students are hooking up -- whether that means a kiss or actual intercourse -- more than twice a year.

But, within that subset, men are overwhelmingly more likely to orgasm than women, and research shows they are more comfortable with casual sex in general, which could be because of cultural attitudes about gender and sex that shame women for the same behavior. When the social stigma of engaging in no-strings sex is removed (and they are given reason to believe the experience will be pleasurable), research shows that women are equally interested in casual sex.

Ejaculation doesn't always mean pleasure, Herbenick was quick to add.  All men may not feel this performance anxiety, but plenty do. And talking about it can act as an important counter-narrative to the idea that guys don't have emotional needs or don't want to give pleasure during sex -- even casual sex.

"I believe that young men at their core have the elements for a multidimensional sexual relationship around pleasure," Rosenberger said. "We have to teach them about what feels good -- and simultaneously say, 'Your feelings can be part of that physical satisfaction. It isn't just about ejaculation.'"

So here is what we know, based on available research and anecdotal data, about a lot of the sex that is happening on college campuses: It doesn't seem to be working out that well for anyone.

Women aren't orgasming because their partners aren't focused on their pleasure and, all too often, they aren't given the vocabulary or permission to ask for what they want. Men are getting off, but feeling disinclined or too intimidated to try and reciprocate.

It's a communication and relational stalemate that is resulting in the perpetuation of destructive gender norms -- and really bad sex.

"It's all a mess," said Ruth Neustifter, a sexuality educator and assistant professor of couple and family therapy at the University of Guelph, Ontario, Canada. "The gendered scripts we have for how to be a man -- we have more of these scripts than we used to, but they are still not terribly deep and they still have a lot of things in common about entitlement and sexual quantity over quality."

That can change, but it will take some practice -- and a cultural shift in which we teach men and women that communication and mutual satisfaction is part of the pleasure of sex.

"In my dream scenario the definition of sex that happens during hookups would be really broad, and I would love to see a situation where people are really asking each other, 'What gives you the most pleasure?'," Neustifter said.

"I suspect a lot of folks" -- yes, even the dudebro -- "really fantasize about that."