Why we love loooong novels

Let priggish critics and short-story buffs sneer, the 19th-century-style novel has never gone out of vogue 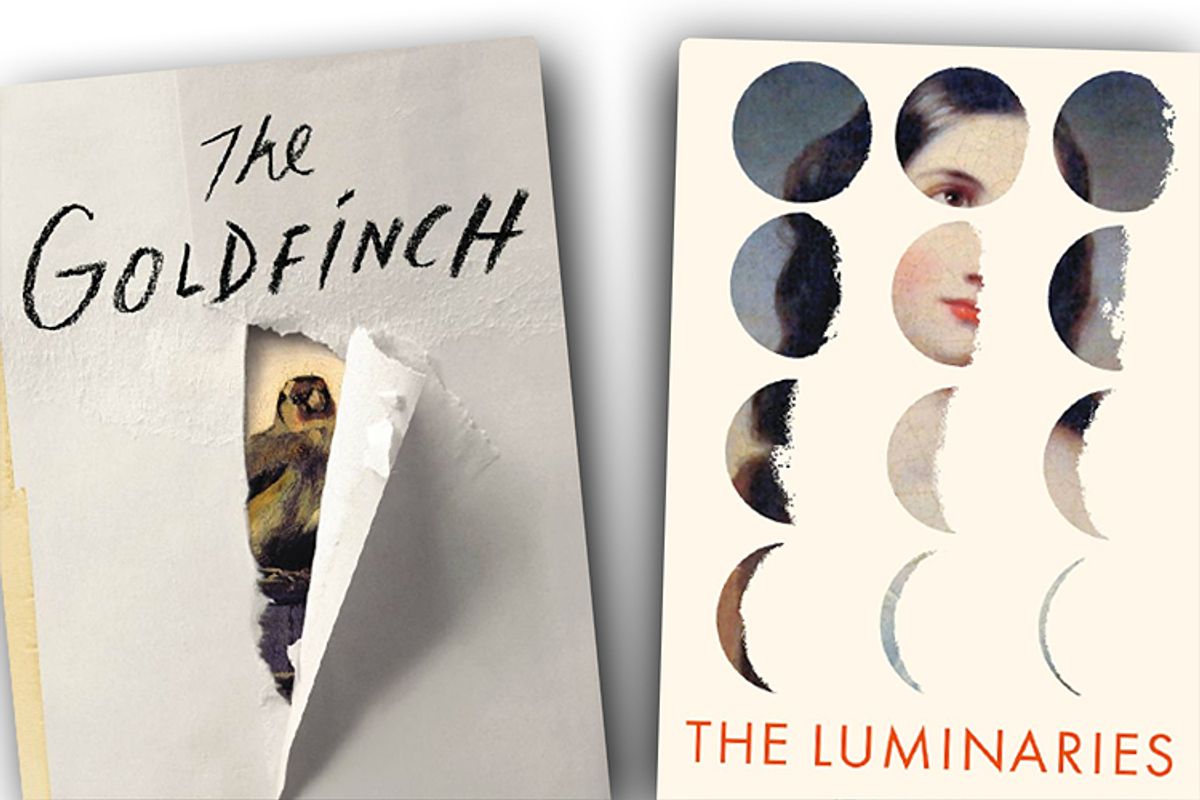 As someone whose job entails reading at least one book a week (usually it's more), I have good cause to regard any novel of more than 400 pages with trepidation. Nevertheless, this fall I positively reveled in long books, from Donna Tartt's "The Goldfinch" (784 pages) and Eleanor Catton's "The Luminaries" (848 pages) to, in audiobook form, Stephen King's "Doctor Sleep" (544 pages) and Elizabeth Gilbert's "The Signature of All Things" (512 pages). All four have been bestsellers, and the first three remain parked on the top-10 lists.

However, when the New York Times reported that Garth Risk Hallberg had sold his 900-page debut novel, "City on Fire," for an advance reportedly just shy of $2 million, and noted that the deal offers "more evidence that the long novel is experiencing a resurgence," I had to shrug. We're talking about the same paper that, with no real evidence, announced that short story collections are also "experiencing a resurgence" just nine months ago. The fact is: Long novels have never, ever been out of favor with readers. You can't make a comeback if you don't go away.

Why do readers -- in defiance of conventional wisdom about shortened attention spans, small-screen devices and pinched schedules -- persist in loving long, long novels? Or, for that matter, moderate-length novels that are really just segments in series that end up colonizing serious real estate on people's bookshelves? I gave a friend's kids the full set of Harry Potter books a few weeks ago (a good 24 inches of shelf space in total), and they've already powered through the whole shebang at least twice. I've seen hundreds of people standing in line to get George R.R. Martin's autograph on his "A Song of Ice and Fire" books (average length per volume: 854 pages), staggering under the load and begging to know when the next behemoth is coming out.

Part of the allure is simple gluttony: If you're loving a book, it's delightful to know that there's plenty of it. But I believe there's also an inherent appeal in fat novels, something that only written fiction can offer and that short stories, for all their felicities, aren't able to provide. You can be swallowed up by a long novel, immersed in the world its author has created in a fashion that no other medium can rival. No, not even boxed sets of HBO series consumed in day-long binges! This immersion reminds many of us of our first, luxuriant plunges into books as children, and any author who can take us back to the place where we forget where we are and how much time has passed will pretty much have us eating out of her hand for good.

The pleasure readers find in this experience is often disdained by literary critics because it tends to hijack your ability to regard and evaluate the book as a work of art. You don't want to think about the person who created it or what techniques he's using or how this particular novel fits into a larger cultural or historical tradition. What you want is for your critical distance to fall by the wayside and for the author's imagined reality to supplant your own. This is what some people refer to as the "willing suspension of disbelief," even though the coiner of that phrase, Samuel Taylor Coleridge, meant it to apply only to well-told stories with elements of the fantastic, things that could never really happen.

But even a basically realist novel, like "The Goldfinch" -- with its stolen masterpiece, quaint antique shop and orphaned protagonist -- can earn a scolding from the likes of, oh, say, the New Yorker's James Wood, for being too "childish," too much a "proffered tray of delicious narrative revelations" while containing "wildly uneven sentences" (the ultimate sin in the Woodian creed). In a nutshell, Wood's verdict on "The Goldfinch" is this: too much fun. He concludes his review by exhorting Tartt to grow up and by imagining the "affecting" novel she might have written instead, about a 13-year-old child of divorce, staying with his father in Las Vegas, contemplating the "slight desolation of Sunday afternoons" as his dad watches football in the next room. Do we have any doubts that this would be a much shorter book? And kill me before I have to read it, please.

The novels that Tartt (and Gilbert and Catton) hark back to are the 19th-century works of the form's heyday: Dickens, Wilkie Collins, Thackeray, Twain, George Eliot. Those books remain remarkably popular today. We can't assume that we read them in the same way that their contemporaneous audience did; in fact, some of the appeal of Victorian novels is their ability to transport readers to what is, for us, a way of life very different from our own. Some of the long novels entrancing us now are historical fiction, like "The Luminaries" and "The Signature of All Things," set in the 1800s. But "The Goldfinch" takes place in 21st-century America, and Tartt just makes it feel like Dickens' London (as well as the Manhattan of "The Mixed-Up Files of Mrs. Basil E. Frankweiler," a similar snow-globe milieu).

Much of the special appeal of a good long novel is rooted in the imaginative dynamics of reading fiction -- assuming, that is, that you're reading for the particular form of pleasure I'm celebrating here. The moment a reader turns to the first page of any novel, an intricate dance begins. "Do I believe this?" might be the first thing the reader asks. "Do I care?" is surely, then, the second. A character and a conflict are the most reliable way to lure the reader further into the story, but a setting, if skillfully evoked, can do the job, too: David Copperfield's cold stepfather, Jane Eyre's stifled pride, the glittering ballrooms of Tolstoy's Russia, the threat posed to Middle-earth. Gradually, the words on the page stop being words on the page and seem to enter our minds as wholly formed sights and sounds and feelings.

It takes a while to become so invested, and it often doesn't happen at all. Getting there is work, like pulling a sled up a hill, but when (and if) you crest the top, it's a splendid ride from there. The problem with a short story is that even if the author does manage to seduce you into believing in her fictional mirage, it's over almost as soon as you take a seat on the sled. A long novel promises an extended tour, and the ratio of ramp-up to glide is much lower. Of course, most novels can't get you to the crest of the hill in the first place; you climb and climb and it never stops feeling like work, until you finally turn around and trudge home. Plenty of long novels have this problem, and when they fail, there is nothing worse. Few readings have been as torturous as my own personal slog through Thomas Pynchon's "Against the Day," for example.

But most readers escape such trials by bailing out as soon as they realize they're not enjoying themselves. Surely book reviewers and students -- the serfs of assigned reading -- are the world's greatest haters of long books. Even the most conscientious civilian reader feels entitled to ditch a long novel without a twinge of guilt; no one can expect you to get through 700 pages of tedium just to say you finished it. True, when a long novel is bad, it is usually horrid, but when it's good, when that proffered tray of delicious narrative revelations seems as vast as a long rainy weekend with nothing in the appointment book, then it is very, very good indeed, and you can have as much as you want.

James Wood for the New Yorker on Donna Tartt's "The Goldfinch"