12-year-old children are working -- and dying -- on America's farms

A stunning lack of regulation for young agricultural workers 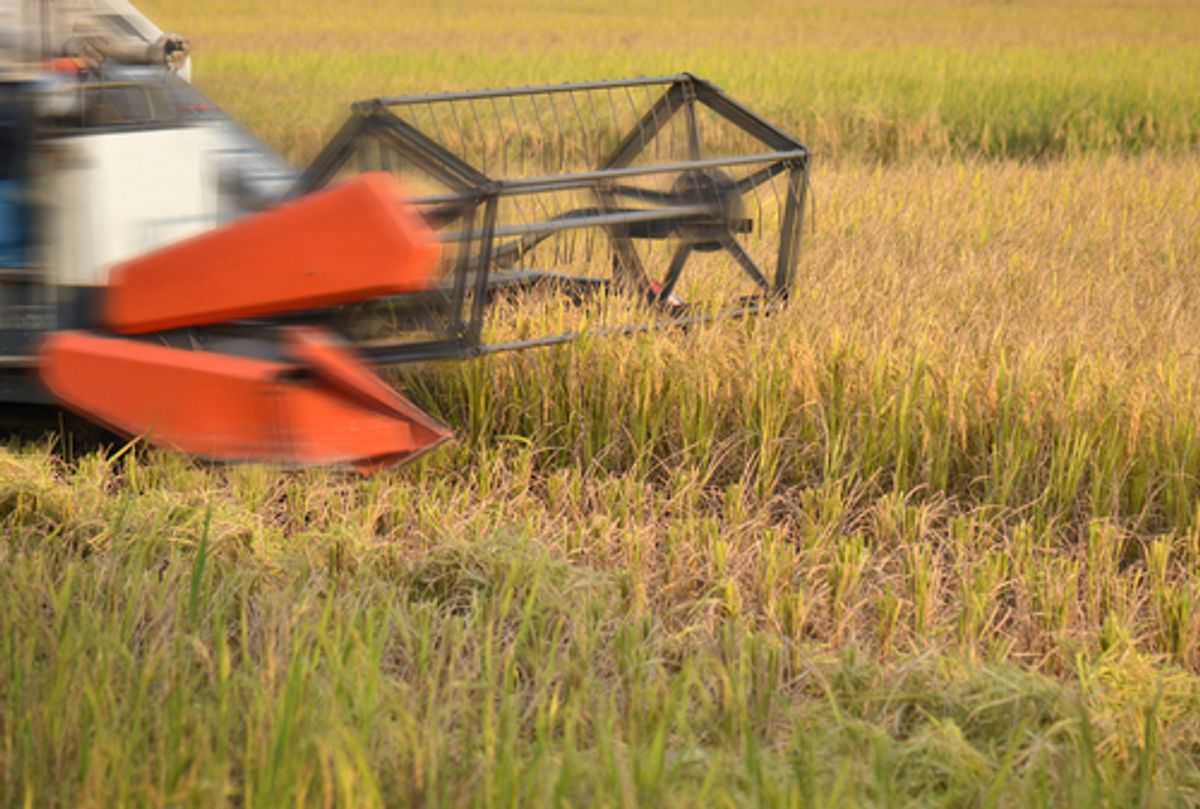 The Nation has two tragic -- and infuriating -- investigative pieces about how young farmworkers (as young as 12) are left entirely unprotected by federal labor laws. Kids, writers Mariya Strauss and Gabriel Thompson found, are getting sick, injured and killed amid unsafe working conditions.

Both articles are pegged to the Labor Department's 2011 attempt to update child labor laws, which fell through in the face of pressure from the Farm Bureau and other agricultural lobbies. Under the Fair Labor Standards Act, kids as young as 12 can work as hired hands in agriculture. The proposed revisions would have kept children under the age of 16 away from more dangerous tasks, just as they would in any other workplace. Instead, the workplace fatality rate for child farmworkers is four times that of children in other industries. Since the proposals were scrapped, Strauss discovered, four farmworkers under the age of 16 died, and 16 others were injured, doing jobs that would have been off-limits:

The cases I did find included 15-year-old Curvin Kropf, an Amish boy from Deer Grove, Illinois, who was killed in July 2012. According to the sheriff’s report, Kropf died after he leaned from his seat atop a tall, tractor-like vehicle called a High-Boy to pull the tassels off a stalk of corn, fell and was crushed under the vehicle’s wheel. According to local press reports, OSHA officials arrived at the scene but left because there were fewer than ten workers on the farm, which meant they lacked jurisdiction. (The same was true of the farm where Michael Steele was working last July.) I also learned about Cleason Nolt, 14, a member of a Mennonite community in Peach Bottom, Pennsylvania, who died along with his father and older brother: all three drowned in a manure pit while working as contractors in May 2012. Another preventable death was that of 18-year-old Kyle Beck of Wauseon, Ohio, who was killed when he fell beneath a wagon full of grain that was being pulled by a 15-year-old driving a tractor, which would not have been allowed under the proposed rules.

Also legal: a 12-year-old working 70-hour weeks in a tobacco field. Thompson writes of the slow poisoning of adolescent tobacco-pickers whose skin ends up absorbing nicotine equivalent to the amount of 36 cigarettes in just one day. The new regulations would also have protected children like the three Cuello sisters, aged 12, 13 and 14:

Their mother told the girls to stick together, but Neftali soon fell behind. “I was seeing little circles, and the sky started to get blurry,” she says. “It felt like my head was turned sideways.” Her mother ordered her to rest in the shade, but Neftali sat down only briefly. “I wanted to show that I could work like an adult,” she recalls. She soldiered on through a splitting headache and waves of dizziness. Several times, about to faint, she sank to the ground between rows to rest.

“I would find her looking confused,” Yesenia says.

Later in the day, Neftali heard someone retching. One row over, Kimberly was bent double, throwing up on the plants. Afterward, feeling slightly better, Kimberly resumed work, only to throw up again. When the twelve-hour shift finally came to an end, the sisters trudged back to their car. Neftali fell asleep on the short drive home, but that night, despite her fatigue, she was woken several times by the same dream: she was back in the tobacco fields, stumbling around in a daze, surrounded by suffocating plants.

How is it possible that this sort of thing is allowed to happen? Strauss points to a certain ethos that might be preventing adults from doing more to protect young farmworkers:

Even if good data can be obtained, Labor Department officials who still hope to expand protections for farmworker children will need to address what Sheriff Anderson referred to as “the culture”: that is, agricultural employers and rural residents who don’t want to be told they have to do things differently, even in the name of safety.

...Even parents whose children were injured or killed may not desire new safety rules. Debbie Nolt, who lost her husband and two sons in that Pennsylvania manure pit, declined to be interviewed, saying only that doing farmwork “is the most preferable way for our young men to learn work ethic and safety and responsibility. We do not wish to have a lot of regulations from the public.” Rebecca Mink, whose son was hit by a truck while driving a tractor in July, likewise declined to talk about her family’s experience, saying she would not support restrictions on what teens can do as workers. “We are certainly opposed” to any new regulations, she said, “and I will not be contributing to that nonsense.”

“To be clear," the Labor Department announced when it withdrew its proposed revisions to the labor laws, "this regulation will not be pursued for the duration of the Obama administration.” So "that nonsense" is over with for now.