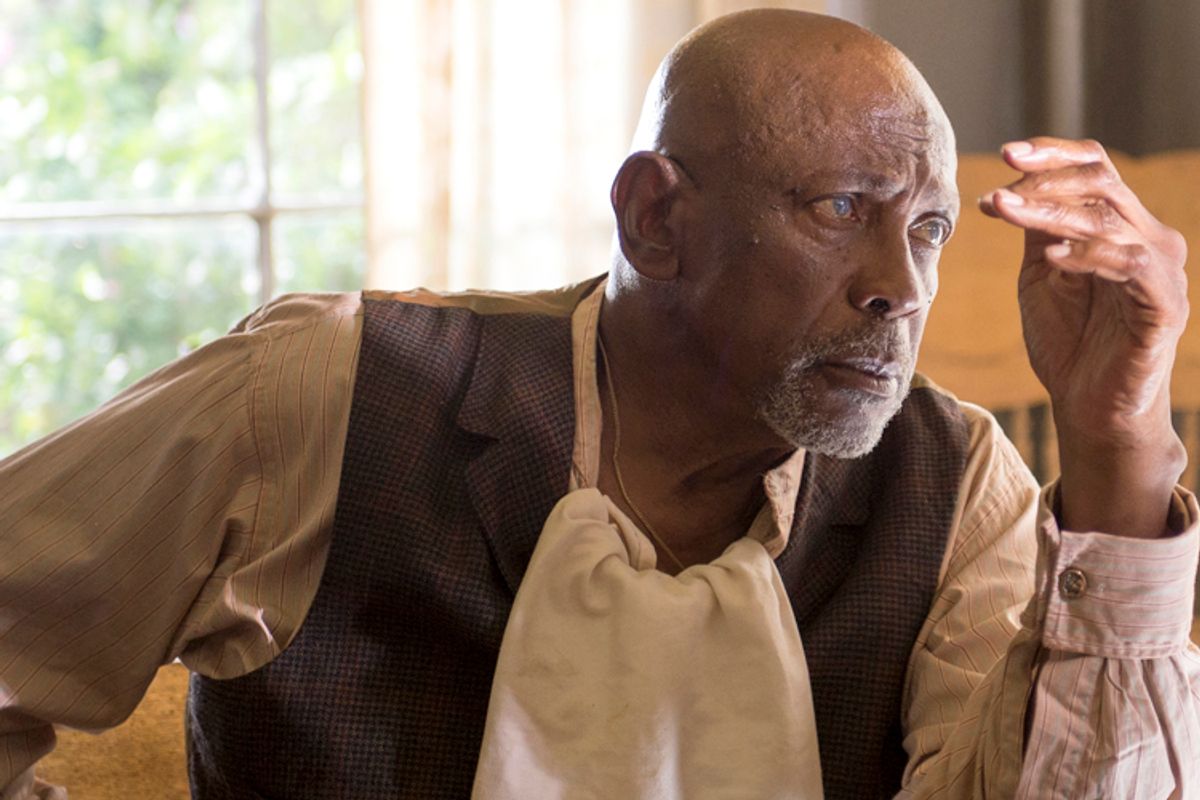 Last week's episode of "Boardwalk Empire" was an explosive one, what with three separate assassination attempts and the conflict over heroin heating up from New York to Tampa. All-out war appeared imminent in both Chicago and Atlantic City. But the episode also had its quiet moments. While it was impossible to miss the violent irony of Chalky White and Dr. Valentin Narcisse trading bullets through the shattered glass window of the Universal Negro Improvement Association, the image of a wounded White draped in dingy red, white and blue and holding a pistol in his one good hand was a far subtler statement. This week's episode follows White into exile and is filled with such moody, poignant moments (spoilers follow).

In it, Chalky White and his battered mistress escape to rural Maryland and the meager protection of a prickly curmudgeon named Oscar played with spectacular acidity by veteran actor Louis Gossett Jr. ("An Officer and a Gentleman," "Enemy Mine"). Warning: The scenes of their uncomfortable reunion are not always easy to parse. Much of the episode plays out in the dimmest light with Oscar and his disciples speaking a pidgin even more clipped and swallowed than White's. It's relatively clear that Oscar was once an effective hustler in his own right, having earned in the shadow of the Commodore and given Chalky White his start. But the old moonshiner's nefarious glory is long behind him. What he's left with is his bitterness, the barest of vision, and a big, rundown house on the shores of the Susquehanna. For a show ostensibly about Atlantic City, "Boardwalk Empire" continues to uncover gorgeous worlds away from the midway.

If anything, home is a recurring theme of the episode, from Oscar's seaside house to Nucky Thompson's appropriated hotel on a different beach. Oscar puts Daughter Maitland to work in the kitchen. Thompson has his brother's huge clan over for dinner in a gesture of familial love that turns ugly. And Gillian Darmody decides to leave her grandson safe in the custody of his adoptive parents and sell her massive residence. Her dreams of putting an awful past behind her, moving on and living a comfortable life more ordinary on the arm of clean-cut respectable Roy Phillips seem so close to coming true.

Getting away clean, however, is not a narrative resolution with which the writers of "Boardwalk Empire" seem at all comfortable. Ever the mentor, Oscar offers Chalky White a simple way out. Daughter, another. Neither seems truly possible. And after the final, harrowing scenes of the episode, the last line -- spoken by Nucky as a declaration of intent -- comes across much more like a prognosis of doom. Enjoy the foreboding.