"It was a complete shock!": Rob Ford's alleged groping victim sounds off to Salon

Sarah Thomson details her charge against Toronto's mayor -- and his sexist behavior goes beyond that! 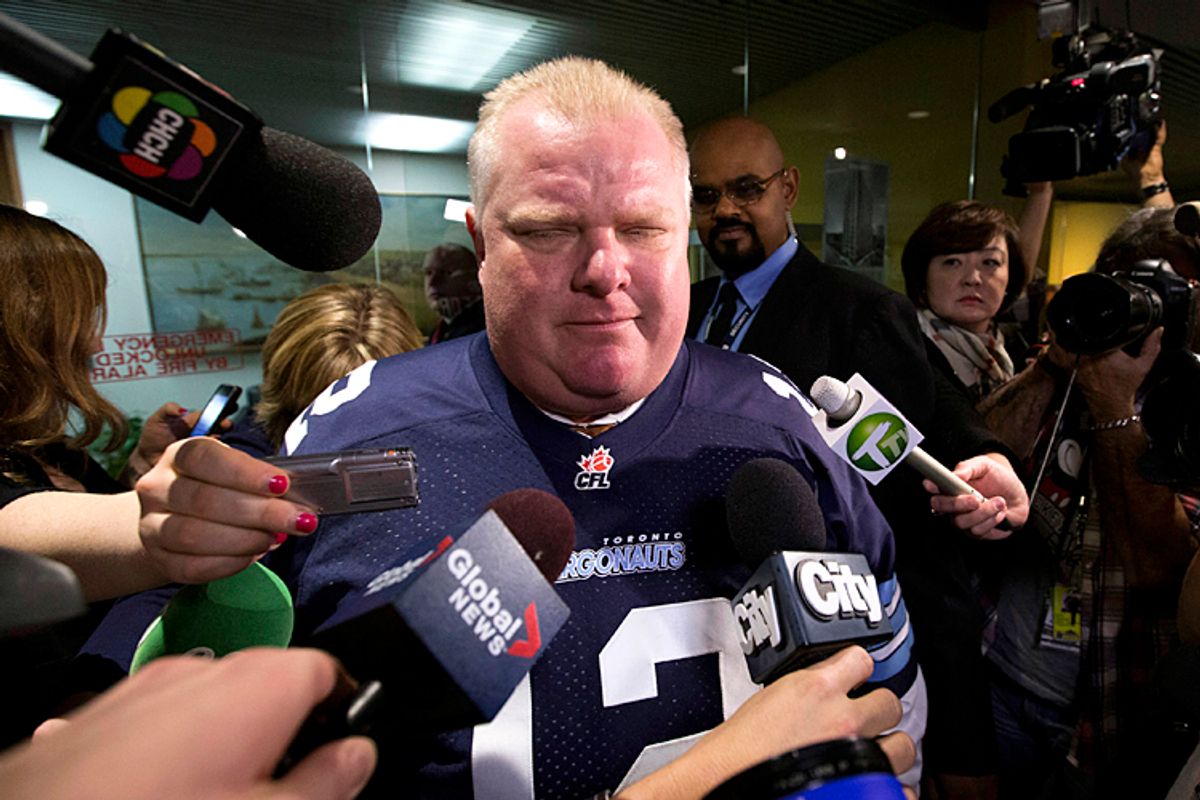 “Oh my god, what the fuck did he just do?” a number of reporters and councillors no doubt responded Thursday when Toronto Mayor Rob Ford, standing in City Hall, said the word “pussy” on live TV and made reference to performing oral sex on his wife. But the quote actually belongs to Sarah Thomson from back in March, before crack-gate hit, when the mayor allegedly sexually assaulted her at a party they both attended in Toronto for the Canadian Jewish Political Affairs Committee.

Thomson, the chairwoman of the Toronto Transit Alliance and CEO of Women’s Post magazine, had worked closely with Ford during the 2010 mayoral election but had never seen the mayor as wasted as he appeared at the CJPAC event. “It was a complete shock,” she tells Salon. “It was a guy who was just like, ‘Hey, baby you must want me,’ kind of thing.” When she confronted him about not attending one of her recent events, he claimed he had been in Florida. “He was like, ‘You should have been in Florida with me, my wife wasn’t there. Sarah, you’re a naughty, naughty girl,’” she says. That was when he allegedly decided to reach down and grope his former colleague’s behind.

A photo of the alleged assault shows Thomson grinning and Ford with his eyes closed, seemingly dazed. “You’re not expecting this guy who’s always so shy and always looking down at the floor to do that to you,” she explains. “So when he grabbed me I was laughing ‘cause I was like, ‘Oh my god, what the fuck did he just do?’”  She went public the day after – International Women’s Day, as it happens – to protect her family’s reputation in case a video of the incident existed. Ford adopted Thomson’s shock in response. “Early this morning, false allegations were made regarding a number of disgusting actions,” he said in a statement. “I am shocked, dismayed and surprised. I can say without hesitation that they are absolutely, completely false.”

Thomson was branded a liar. Then the Globe and Mail revealed that the mayor had in fact traveled to Florida without his wife. And in the past week Ford has proven his word isn’t exactly gospel having finally admitted to buying illegal drugs and driving while drunk. Thomson admits she’s “had a lot of apologies.”

Though the mayor has admitted to smoking crack, buying illegal drugs and driving under the influence, it is his treatment of women that may ultimately get him kicked out of office. On Wednesday morning at Toronto’s City Hall, to the shock of fellow councillors and reporters, the mayor freely adopted graphic language to refute allegations that he had brought a sex worker named Alana into City Hall on St. Patrick’s Day 2012 and that he had made sexually explicit comments (“I’m going to eat you out” and “I banged your pussy”) to his female policy advisor, Olivia Gondek.

“This is very disturbing against my wife. Alana is not a prostitute. She’s a friend and it makes me sick how people are saying this, so unfortunately I have no other choice. Litigation will be starting shortly,” he said, before adding, “Oh, and the last thing was Olivia Gondek. It says I wanted to eat her pussy and I have never said that in my life to her. I would never do that. I’m happily married. I’ve got more than enough to eat at home.”

Though the mayor later apologized for the comments, his peers were left aghast. Councillor Janet Davis called the comments “repugnant, distasteful, hateful and misogynist” and claimed she had “never heard such disgraceful language and statements made in the public realm by an elected official, ever.” Councillor Denzil Minnan-Wong seemed to concur. “The mayor of our city should not be using language like that; he shouldn’t be speaking about women like that,” he said. “He crossed the line. No apology would suffice in this circumstance. He has to resign. There’s no doubt in my mind that he should be the mayor to this city.”

But Ford’s misogynistic script is not new to City Hall. Councillor Michelle Berardinetti says the mayor demonstrated a “caveman-style” approach to female members of staff when she worked as one of two women on the mayor’s 13-member executive committee (a committee representing a city in which women outnumber men). “I find that some of their thinking and some of their terminology is antiquated and archaic,” she tells Salon. According to Berardinetti, Ford called his fellow councillors “ladies,” which recalled his use of the word “females” in April on his radio show when he offered to introduce women to politics. “I encourage people, I’ve always encouraged people — especially females. We need more females in politics,” he said . “And it seems everyone says, ‘Oh, it’s male-dominated.’ Well, call me. Call me at home and [I’ll or we’ll] go for a coffee, and explain how politics works.”

A “centrist liberal,” Berardinetti says she was welcomed into Ford’s conservative enclave because “there are not that many females that sit where I sit on the spectrum.” She says women often come into politics at a grassroots level and choose more liberal parties. But even though she saw eye to eye with Ford on fiscal matters, she did not agree with him on “everything and anything,” that eventually became a problem.

“His staff would be in my office every day basically harassing my staff,” she says.  Nor did he seem particularly interested in Berardinetti’s political strategies. “There were times when I went into his office and I would be speaking to him and his eyes would be fluttering up in his head and he would be watching TV and not really listening to anything I said,” she explains. Berardinetti quit last November and the last woman on the executive team, Jaye Robinson, soon followed when she was fired after suggesting Ford take time off to deal with his “personal issues” (he denied her statement had anything to do with her departure).

Jessica Spence, Operations and Research Director at Women in Toronto Politics, claims a “new culture of hostility” toward women – councilors, staff and citizens — has taken over City Hall since the mayor was installed. “There seems to be a sense of impunity where sexist remarks and attitudes are tolerated and used to undermine the real contributions of women in council,” she says via email. During his time in council, for instance, Ford made reference to a children’s author as a bitch and called fellow Councillor Gloria Lindsay Luby “a waste of skin.”

Nor is his behavior toward women much better outside the office. Thomson is not the first woman to accuse Ford of assault. In 2008, the mayor’s wife of 13 years, Renata, who is so rarely seen in public the Toronto media has dubbed her “the invisible wife,” called 911. Soon after the mayor was charged with assault and threatening death but both charges were withdrawn after Renata’s statements were deemed inconsistent. According to the Globe and Mail, the court documents released Wednesday point to another domestic assault call from Ford’s residence in late August. Meanwhile, Renata made a rare appearance by her husband’s side at City Hall this morning, but did not speak a word.

The mayor has menaced other women over the years. Earlier this month, City News released a video showing Ford intimidating a couple of female reporters who followed him into an underground garage at City Hall. He threatened to call security while backing them into a wall. In 2011, the mayor denied a Toronto woman’s accusation that he gave her and her child the finger when they asked him to put down his cellphone while driving.

That same year he reportedly called a couple of 911 operators “bitches,” though he also repudiated this. Even before he was mayor, in April 2006, Ford was ejected from a local hockey game for drunkenly insulting a couple who tried to quiet him down. “Do you want your little wife to go over to Iran and get raped and shot?” he reportedly asked them. Ford later apologized and claimed to have had “one too many beers.” Try one too many beers and a healthy dose of sexism.

Salon reached out to Ford's office for comment several times, and will update this post if it decides to respond.