Is this Oscar favorite the perfect depiction of 2013 Catholicism?

Steve Coogan and Sophie Kennedy Clark discuss "Philomena," the story of a Catholic woman at odds with the church 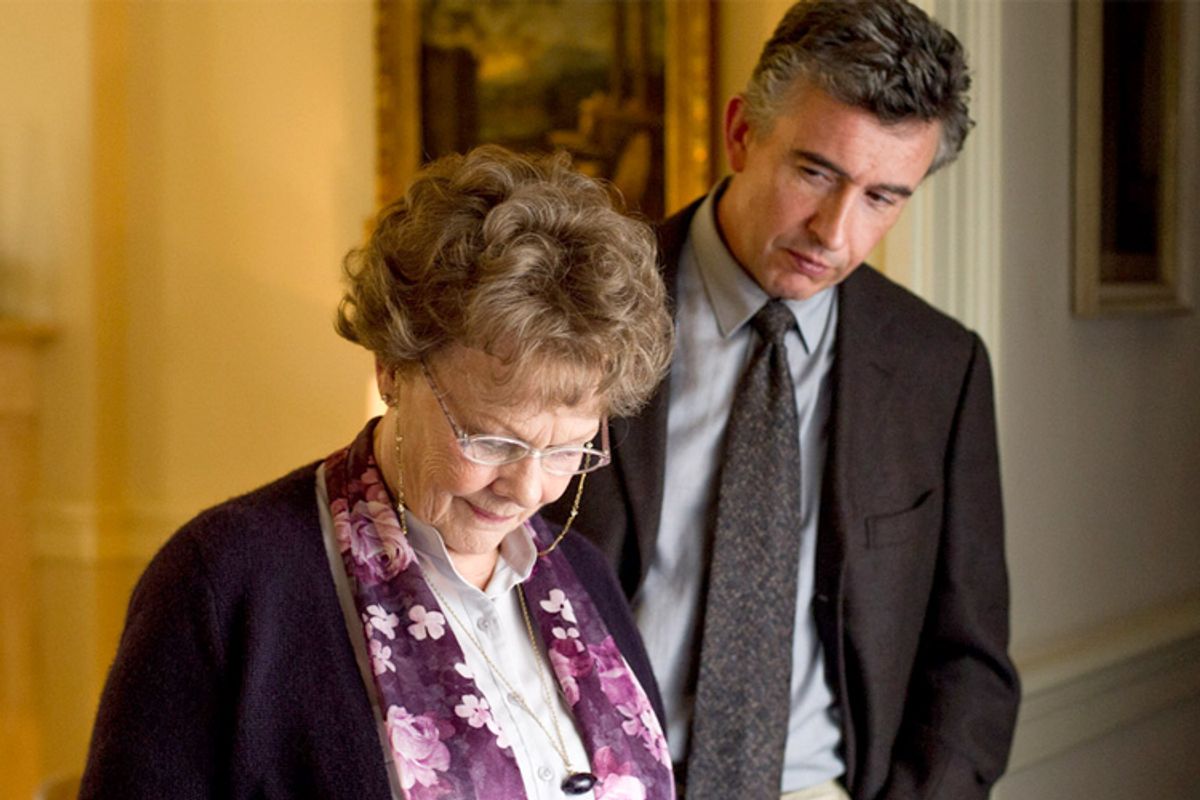 "Philomena," which opens Nov. 27, is already making waves; the warm and witty lead performance by Judi Dench as a quiet, pious woman searching for a son put up for adoption years earlier, is perceived to be among the front-runners for a best actress nomination at the Oscars. The film has already opened in the U.K., where it has performed very well at the box office; stateside, the Weinstein Co.'s lobbying campaign to get the rating for "Philomena" down to a PG-13 was successful, meaning more moviegoers will be able to buy tickets.

The film's prospects, in short, seem bright -- and yet the subject matter is far tougher than a brief description might make it sound. Philomena's son was taken from her against her will by the Catholic nuns nominally caring for her; they are portrayed, in flashbacks and in the film's present, as cruel and dishonest. They conceal information from Philomena as she seeks the truth about what happened to her, years after they forced her into what is effectively indentured servitude as penance for giving birth. The profanity that prompted the film's initial R rating stateside was addressed at a nun.

The whole thing's based on a true story -- the real Philomena Lee gave birth in an Irish convent and then spent years searching for a son who also sought her, as the nuns of Sean Ross Abbey refused to help. Steve Coogan, who co-wrote the film and appears as the journalist working on a story about Philomena, noted that the story had been short-lived: "There was publicity at the time, but it came and went within the week."

So why revive the story on film? Co-star Sophie Kennedy Clark, who plays Philomena as a young mother, noted that the subject matter, about the misdeeds of a powerful religious group, was unusual for a film. "Other maltreatments, like slavery and war crimes, are usually brought to light. But this is the first time aside from 'The Magdalene Sisters,' this has been done, and 'Philomena' has taken an actual true story of a woman who's still alive. That gives it more gravitas." "The Magdalene Sisters," the harrowing 2002 film about maltreatment at asylums, treats the matter as a settled issue and takes place entirely in the past; the consequences of past misdeeds, though, resonate in the present for Philomena.

Both Coogan and Clark were sanguine about the possibility that the film would offend Catholics in its depiction of the church as organized, at the local level, around deception. "I wasn't worried about the way it would be viewed religiously," said Clark; part of that is because the film depicts Philomena herself as religious, albeit deeply angry at the nuns who kept her from reuniting with her son. "It doesn't demonize the religion as a whole, it focuses on an element that was quite under the radar."

Coogan himself was raised in a Catholic family and sees private religious devotion as a positive thing. It's the institution that causes the trouble. "I am not Catholic and I have certain issues with Catholicism," he said. "I didn't want to make the film about it. There are people I love and respect who are Catholic; I wanted to honor them. I didn't want it to be an attack on their faith. Philomena is very religious -- it's her faith that allows her to forgive. I was concerned people would take it the wrong way but was careful to dignify the individual who practices their religion in a private, nonagressive way without impinging on rights of individuals."

"Philomena" may be precisely the movie that crystallizes the Catholic Church in 2013, as the current pope makes tentative steps away from the aggressive positioning on social issues that characterized the church in the 20th century. "Philomena" is about a Catholic woman at odds with her church but deeply humble in her faith. Other than protestation from the nuns who specifically dealt with Philomena Lee that they were mischaracterized, there hasn't been much outcry around the movie -- the Catholic League, usually extremely vocal about such matters, has kept quiet. Overseas, though, the film has sparked conversations around the church. Referring to the culture of the authoritarian church, Coogan said, "It is now part of old Ireland. I think most people agree it had unchallenged autonomous power before. It has the potential for a constructive conversation. If people are hanging onto old notions, old-fashioned views, the best form of defense is attack." While the church may never even acknowledge the film, the movie's success overseas and the fact of its existence in the midst of Francis' early papacy feel epochal.

Indeed, the conversation may be around the church rather than with it. It's possible the church and groups like the Catholic League would rather not deal with this subject at all; that convents' treatment of young women in Ireland at midcentury was so appalling that there's no way they can defend themselves. "The attitude in Ireland, where this is an issue, it's been avoided," said Coogan. "Let's not talk about it. It happened a long time ago. Let's move on. The church's position says not to rake over old coals. But you have to recognize mistakes of the past and say sorry. People don't want to hear excuses and certainly not excuses from the church. People don't want to hear a mea culpa."