There are many things wrong with comparing a healthcare rollout to the deadly hurricane. The main one: Nobody died 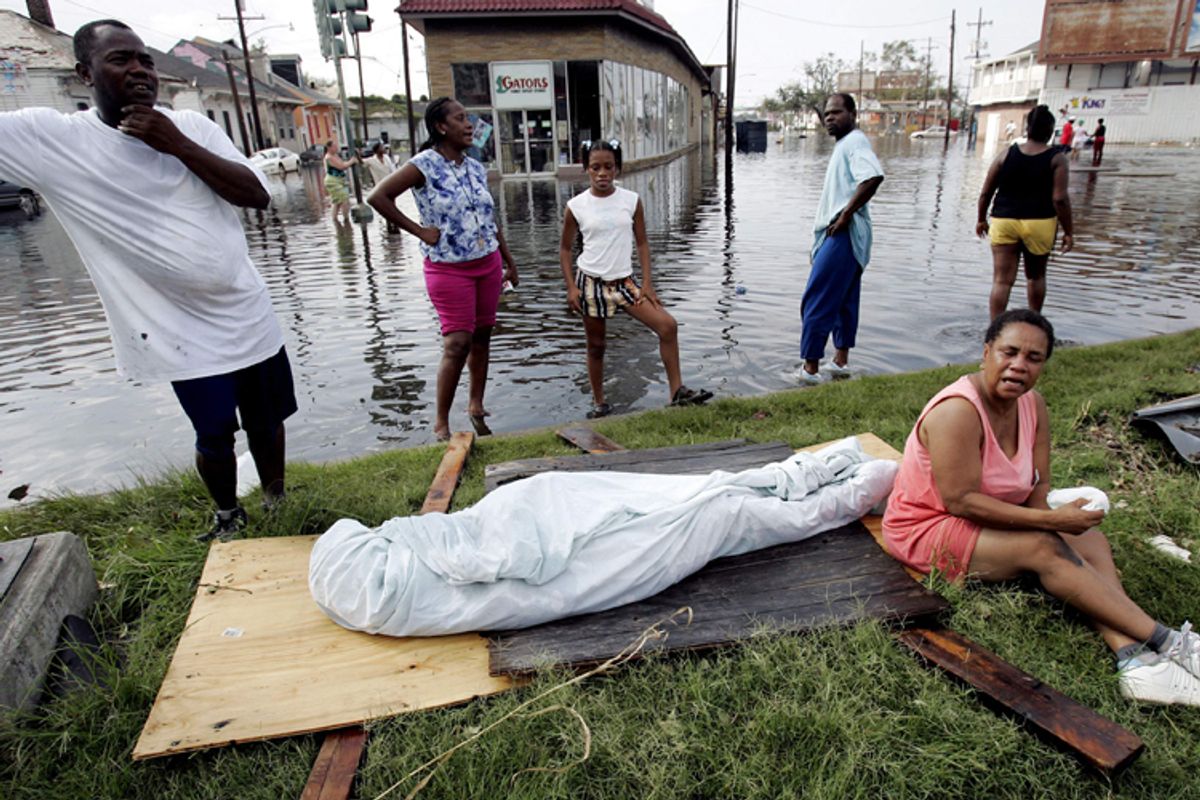 Evelyn Turner, right, with friends and family, waiting with the body of her common-law husband, Xavier Bowie, after he died in New Orleans, Aug. 30, 2005. (AP/Eric Gay)
--

It’s one thing for former George W. Bush flack and Sarah Palin staffer Nicolle Wallace to make a silly and self-serving link between the troubled rollout of President Obama’s Affordable Care Act and her boss’s handling of, wait for it, Hurricane Katrina. It’s another for the New York Times to pick up the cudgel and seriously make a comparison between the Affordable Care Act's acknowledged problems and the deadly 2005 tragedy.

But that’s what the paper did Friday morning, with Michael D. Shear’s “Health Law Rollout’s Stumbles Draw Comparisons to Bush’s Hurricane Response.” Other media are using the Times piece to make the same comparison. ABC's "Good Morning America" did a whole segment on it; as I write, the chyron on MSNBC asks “Obama’s Katrina?”

Shear put it this way:

The disastrous rollout of [Obama’s} health care law not only threatens the rest of his agenda but also raises questions about his competence in the same way that the Bush administration’s botched response to Hurricane Katrina undermined any semblance of Republican efficiency….

“The echoes to the fall of 2005 are really eerie,” said Peter D. Feaver, a top national security official in Mr. Bush’s second term. “Katrina, which is shorthand for bungled administration policy, matches to the rollout of the website.”

No, Mr. Feaver, Katrina isn’t shorthand for “bungled administration policy.” It’s an actual tragedy in which at least 1,800 people lost their lives. Thousands of others were left stranded without food or water in their flooded neighborhoods, on freeway viaducts, in hospitals and nursing homes, and in the televised hell-hole of the Superdome. A million people were displaced, some of them permanently. Whole neighborhoods remain unrestored eight years later. There was at least $123 million in destruction, twice as much as in Hurricane Sandy.

In the ACA holocaust, by comparison, an undetermined number of people may lose health insurance policies they like. Many more, perhaps millions, have been frustrated by a kludgy website. On the other hand, at least 100,000 have signed up for insurance through the exchanges and another 500,000 or so have been newly covered by Medicaid expansion.

Oh, and there have been zero deaths as a result of the ACA woes -- unless you count the death of credibility among journalists and pundits who would make such a lame and cruel comparison.

In Katrina, a toxic mix of indifference to the plight of poor, black New Orleans residents and genuine colorblind incompetence made a natural disaster worse. Bush, you’ll recall, threw a birthday party for Sen. John McCain, and then flew over the ravaged Gulf region without stopping. When he did visit, he praised his lame FEMA director Michael Brown – whose job as a commissioner of the International Arabian Horse Association had been great training for running the nation’s disaster preparedness agency – with the iconic “Heckuva job, Brownie.”

Obama, by contrast, stepped forward when the website troubles emerged. “Nobody is madder than me about the fact that the website isn’t working as well as it should, which means it’s going to get fixed,” he told a crowd Oct. 21. It’s still not fixed, although it’s working better, and the president has continued to push his staff for answers and apologize for the rollout woes, last week in an interview with NBC’s Chuck Todd; last night in a press conference. “There were times I thought we got slapped around unjustly,” the president said. “This one is deserved. It’s on us.” There has been nothing close to a “Heckuva job, Brownie” moment.

Finally, in Hurricane Katrina, most of the victims were poor African-Americans. In the current ACA controversy, the vast majority of people losing their private insurance policies are young and middle-aged white men who aren’t affluent, but are doing well enough that they don’t qualify for federal subsidies. That makes the Katrina-ACA comparison particularly outrageous, especially for journalists.

All that will ultimately matter is whether and when the site gets fixed, and the turmoil in the individual market, where some people are losing policies they want to keep, subsides. We still don’t know if the president’s proposed “fix,” which should let at least some of those folks hold onto their existing insurance, is meaningful enough to quell the political panic among some Democrats and people losing insurance, yet limited enough that it doesn’t undermine the goal of getting a bigger pool of people into the individual market for ACA-approved health insurance plans (rather than the junk insurance that currently dominates the individual market).

It’s clearly a mess, with genuine political and public policy implications. It’s fine for shrill Republicans to call it Obama’s Katrina, or his Iraq, or his Iran Contra – when it comes to this president, they have no credibility and they have no shame; they’ll say anything. But for the media to pick up on the GOP narrative and sincerely compare the ACA rollout stumble to a national tragedy like Hurricane Katrina?

Someone might call it the media's Katrina -- if it was fair to use a tragedy in which thousands died as a metaphor for mere incompetence. So I'll just call it incredibly lame.