Trust Me on This: How Jamie Moyer conquered his fear of failure -- and won 269 major-league games

For 25 years, Jamie Moyer relied on guts and guile -- and won 269 games. A sports psychiatrist gave him the nerve

By Jamie Moyer as told to David Daley 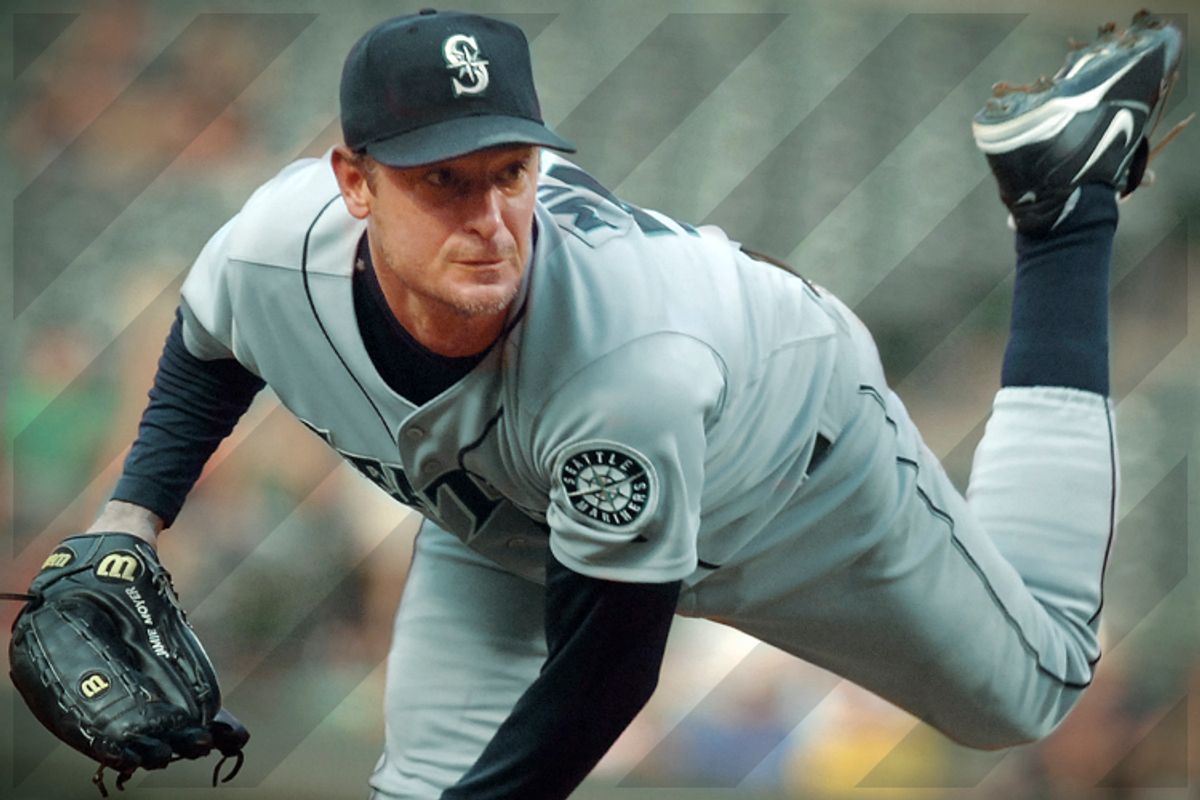 I had success on the field but I always had people doubting me. Telling me that I couldn’t do things.

Then I made it to the big leagues and for the first time, I just wasn't sure which way I was going for the first five years of my major-league career. Really, I thought I might be finished. But in 1991 I read Harvey Dorfman's book "The Mental Game of Baseball." I thought I understood that book quite well -- until I spent two and a half days at Harvey's home.

A lot of pro athletes and major leaguers would resist talking to someone like this. But I was struggling in my career and I felt like I better try something. I had to do something. The book intrigued me and interested me. I thought, why not? Let's try this. So I went out and spent time with him and really found it beneficial.

It started at the airport when we met and drove out to his home. He asked me point-blank questions -- and I was probably quite negative with some of my responses. You know, "I can't do this." "I struggle with that." "I'm not good at this." And right then and there he says, "That's part of your problem. You have to change your thought processes."

It all sounds so simple: To aspire to great achievement is to risk failure.  No one can make you feel like a failure without your consent. Good learners risk doing things badly in order to find out how to do things well. He taught me how to prepare mentally and physically, and how to hold myself accountable. It's about focus and concentration -- I thought I was doing that, but I wasn't.

I could be distracted by anything. About what people thought of me. About something I'd hear a fan say. And he taught me that you shouldn't be concerned about that. If you go out and do your job the way you are supposed to, then you don't have to worry about what anyone else thinks or says.

I know when I've accepted failure. Oh, I lost today. It's OK. No, no -- it's not OK. Why did I lose? How could I have been better? Did I prepare every day? That's the challenge. Some days you are more motivated than others. Some days you went through two time zones to get to travel to your next game. Maybe you haven’t slept well. Maybe there’s a distraction away from the field. Maybe there’s a distraction at the field. Somebody’s done something to offend you. A fan has said something that you heard and all of a sudden it became a distraction to you. Somebody in the media questioned who you are or what you’ve been doing, or your manager, your pitching coach or your general manager pulled you aside and ridiculed you.

Harvey gave me the confidence to say here's what I am. This is the pitcher I am. Like it or leave it. I had been afraid to pitch inside. My stuff is going to be short. If you are going to compare my stuff to my teammates' or to the league, it's probably going to be short. But the heart, the desire, the passion, the work ethic, the focus -- hopefully that matches or surpasses anyone in the league.

He gave me the confidence to pitch with what I had. He told me your fastball is, what -- 81, 82, 83 miles per hour? That’s what you have to work with, so learn to use it as a tool. Just like a change-up is a tool -- if you can keep speed variance it can be a great pitch. But it's an I dare you pitch, especially with a big swinger. I had to learn how to use a hitter's ego against him. When he swings through one, it becomes, all right, will you chase this one off the plate? How far will you chase below the strike zone? I'm taking their ego and pushing it back at them.

I had a lot of success against the Marlins when I came back to the National League. They were a very young team. They were a very aggressive team. I was a 40-year-old soft tosser. The saying in baseball is they're "spitting on the pitch" -- disrespecting what you throw. And it just played right into my hands. I'd throw softer and softer. They'd get antsy and chase. I knew I didn't have to throw a strike. I was in control.

Like anything, it takes practice. And you have to create repetition. But it all comes down to risk and taking a chance. You have to learn that's OK. Harvey taught me that we all have fears in life, but you don't want to feel fear of failure. I feared that. And what happens when all of your energy goes into that fear instead of the actual act itself, and doing it positively and doing it correctly? If I have a lot of fears and focus on that, how successful do you think I'm going to be?

Jamie Moyer won 269 games in a 25-season major-league baseball career. In 2012, he became the oldest pitcher to win a major-league game. He is the author of the book "Just Tell Me I Can't: How Jamie Moyer Defied the Radar Gun and Defeated Time."

MORE FROM Jamie Moyer as told to David Daley

Baseball Books Harvey Dorfman Sports Tmot Trust Me On This