10 queer rappers you should be listening to instead of Eminem

Why listen to the perpetually hate-spewing rapper? Support these super-talented queer hip-hop artists instead 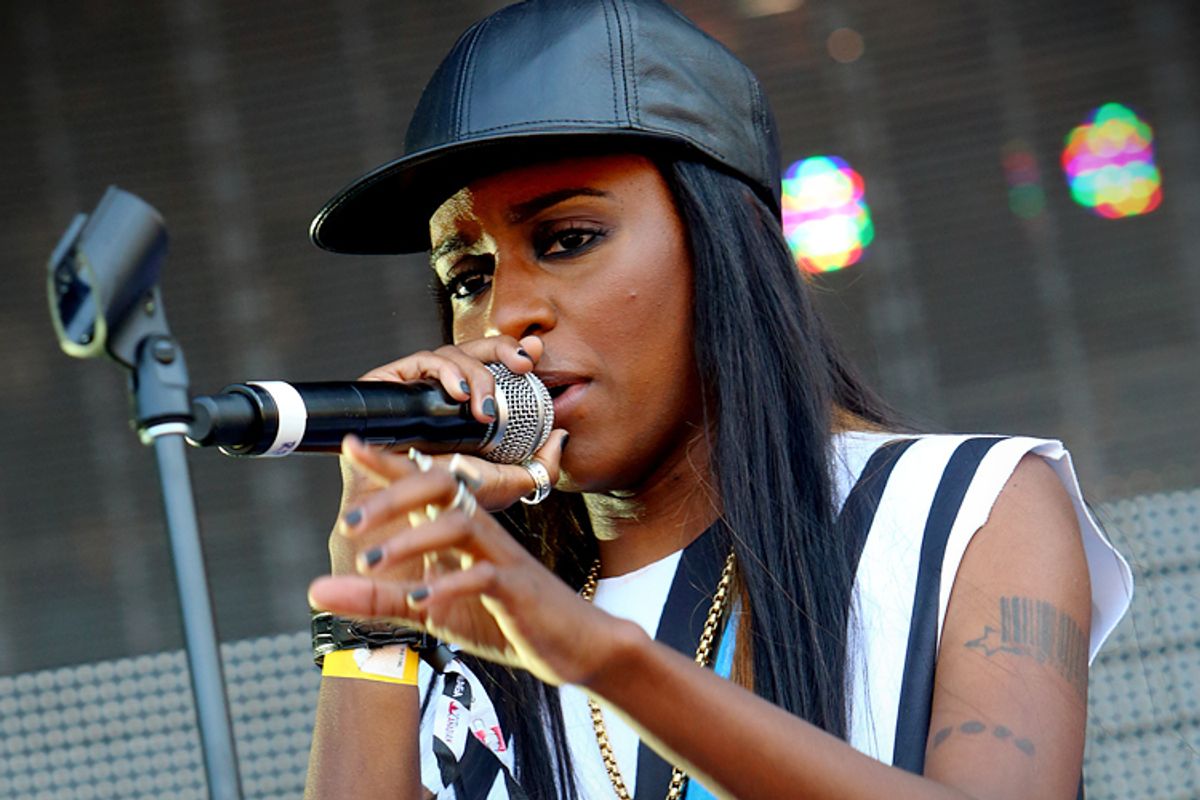 In recent weeks, critics have rightly lambasted Eminem for the homophobic content of his latest album, "Marshall Mathers LP 2." The rapper has been criticized in the past for continuing to using the word “faggot” in his music, and on the recently released “Rap God,” he also uses “gay-looking” as an insult.

However, Slim Shady defended himself last week in an interview with Rolling Stone, in which he states that those words mean something different to him. “Gay” doesn’t denote “homosexual;” he claims it’s more like “calling someone a bitch or a punk or asshole.” Eminem will continue to be skewered for his stance, but he has shown he’s unlikely to listen to his critics.

So instead of giving him more attention, here’s another solution: Stop listening to him. Instead you can fight homophobia by supporting queer hip-hop artists, those battling prejudices and challenging stereotypes in the music industry every day. Here are 10 to get you started, so you can start deleting Eminem from your Spotify playlists today.

At just 22, Angel Haze has already released six mixtapes, recording since the age of 18. For someone barely able to drink legally, she’s already a seasoned hip-hop vet with tracks placing on NME and Pitchfork’s year-end best lists. Last year she was nominated for the BBC’s Sound of 2013 poll, which highlights emerging artists, and she’s kept just as busy this year, gearing up for her debut album, "Dirty Gold," due out in 2014. Get ready because you’re about to be hearing a lot more from her.

Recommended Track: “Cleaning Out My Closet,” an Eminem cover that vastly improves on the original by queering up the joint.

Claiming she’s the “female Kanye West,” Azealia Banks is just as outspoken as she is talented. The rapper has well-publicized beefs with just about everyone on the planet, including Lady Gaga, Bauuer, Perez Hilton, A$AP Rocky, Iggy Azalea, Lil’ Kim, Nicki Minaj and her own management. However, don’t let the press outshine her actual work, as acid-tongued as NYC house rap gets. The four tracks on her 1991 EP find hip-hop at its most brash and rebellious, a giant middle finger to the rap establishment. It’s a great start to a promising career.

Vice Magazine compared Big Dipper to “Nicki Minaj plus a gay bear,” but he’s more than bubblegum rap with a hairy veneer. On top of being deliciously foul-mouthed and sex obsessed, he’s a genuine showman, imbuing his work with indelible presence. From “Summertime Realness” to “Drip Drop,” Dipper’s spicy charm is as inexhaustible as his verses. It’s the substance behind the edge that sticks with you.

Big Freedia didn’t just beat Miley Cyrus to the “twerk queen” throne. She holds the world record. In September of this year, Big Freedia amassed a crowd of hundreds in Herald Square to set the Guinness Record for booty-shaking, an honor she’s been working up to for over a decade. The New Orleans-based rapper helped popularize the genre of bounce rap, and she's been blowing up. In addition to her own show on Fuse, Freedia was even name-dropped on David Simon’s "Treme." As BuzzFeed’s Saeed Jones put it:“It’s Big Freedia’s world, and we’re just twerking in it."

Recommended Track: “Y’all Get Back Now,” a track that out-booties even Major Lazer.

House of Ladosha recently made the Out 100, and it’s easy to see why. This avant-garde music collective is changing the game, making everything from t-shirts to underground hip-hop anthems. Their tunes mix minimalistic swagger and hilarious directness -- like on “Rollin,’” when Dosha Devastation proclaims that she named her, ahem, lady parts after Molly Ringwald. With a legion of housemates behind her, Devastation’s gender-bending House of Ladosha isn’t just music. It’s a movement.

Born James Whiteside, JbDubs got his start as a ballet dancer, which explains his 2011 viral video sensation, “I Hate My Job.” The video was described by the Huffington Post as “9 to 5” meets Beyonce’s “Single Ladies,” but JbDubs brings more to the table than great legs. His music often straddles the divide between pop, rap and dance music, putting on a show that gives us a little bit of everything. Whiteside is fiercely talented, and it seems like he can do it all -- even in heels.

Recommended Track: “I Hate My Job,” whose infectious video would make Beyonce proud.

Le1f got his start as a producer for such acts as Das Racist (and was behind their signature tune “Combination Pizza Hut and Taco Bell”), but he broke onto the scene as a rapper in 2012 with “Wut.” In 2013, he put out two staggeringly accomplished mixtapes, "Tree House" and "Fly Zone," which highlight the MC’s incredible range. Released in September, "Tree House" is dark and moody, a sensual landscape masking an atmosphere of underlying dread.

The drag persona of Michael Quattlebaum, Jr., Mykki Blanco began as a persona Quattlebaum made up for a YouTube video, inspired by Lil’ Kim’s Kimmy Blanco alter ego. However, Blanco’s “teenage girl rapper” turned into an avant-garde drag statement, blending influences as wide-ranging as Jean Cocteau, Lauryn Hill and riotgrrl icon Kathleen Hanna. Blanco rejects the “gay rapper” label, and Ms. Blanco’s poetry (described in Interview as “impassioned and sometimes illicit”) is just as inspired and accomplished as her music. Mykki Blanco is poised to take over the world, and she probably will.

Recommended Track: “Wavvy,” a tune that’s as label- and boundary-defying as its creator.

Zebra Katz had an unlikely path to success. The performance artist got his big break in 2012 when fashion designer Rick Owens played Katz’s “Ima Read” for “roughly 11 minutes” during Owens’ Paris show. “Ima Read” was conceived as a tribute to the ball culture of “Paris Is Burning,” a minimalist throwback that felt fresh and powerful. One New York Times profile later, Katz had blown up with the French and Americans alike, described by Gawker as an “underground anthem.”

Recommended Track: “Ima Read,” one of the strangest and most unforgettable videos you’ll see this year.