Alexander Payne: "There’s always humor to be mined in blindness"

The "Nebraska" director on the Midwest, actors without makeup, and why he loves characters who delude themselves 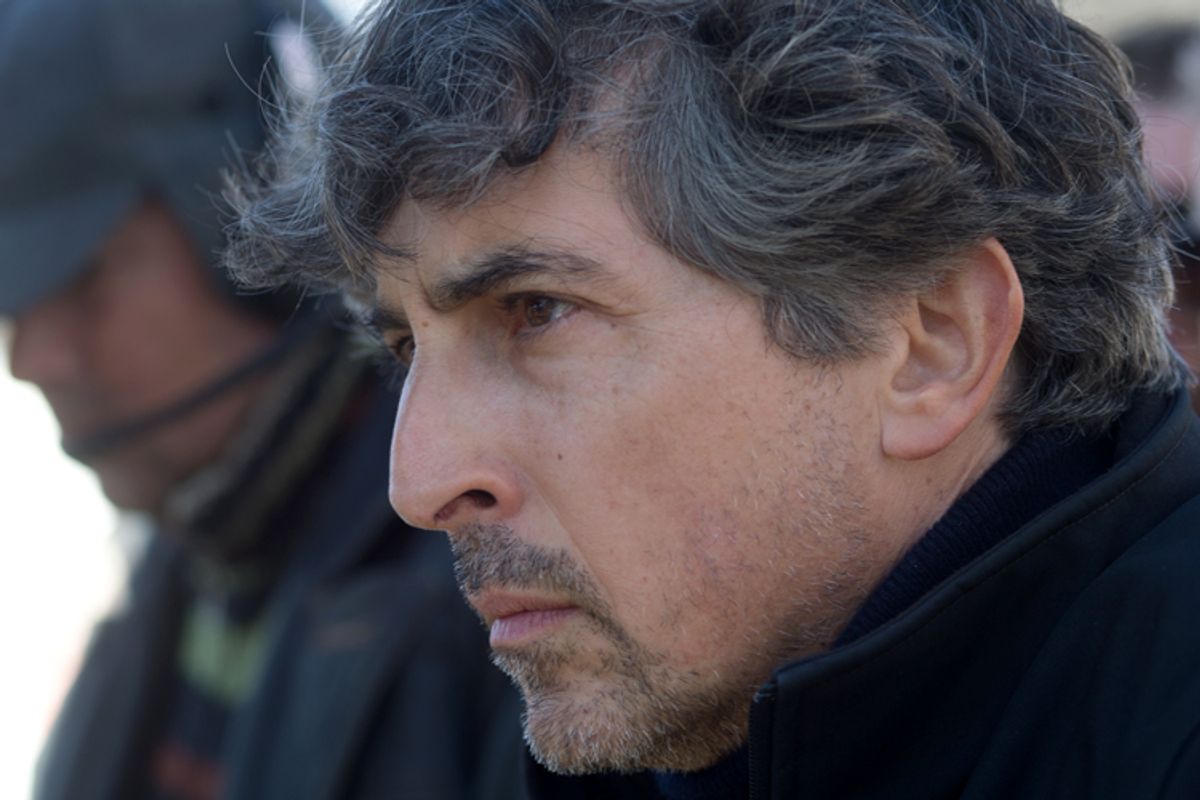 Alexander Payne on the set of "Nebraska" (Merie W. Wallace)
--

I don’t believe it’s hyperbolic to say that speaking with writer/director Alexander Payne about, of all films, “Nebraska,” is a dream interview. I was born in Payne’s hometown of Omaha, and moved away at age 13. It’s the place I spent my wonder years, and I still have many relatives who never left, some who live in places you’ve probably never visited, or even driven through, with names like Tecumseh and Elkhorn. If you enter a bar, you can be sure there’s a poster or cutout of the obese Cornhusker mascot Herbie Husker posted somewhere, and talk will generally cycle between sports, cars, neighborhood gossip and hunting. Drinking is custom, not vice. This is not a critique of values, education or intelligence. It’s just the way that I know life in Nebraska. And Payne knows it too.

In “Nebraska,” his first film since the award-winning “The Descendants,” Payne strips bare the story of an aged patriarch (Bruce Dern) on a quixotic journey to claim a million-dollar sweepstakes payday. Along for the ride are sons Will Forte and Bob Odenkirk, and the hilarious Jane Squibb as Dern’s profane, long-suffering wife.  Mildly derided as “minor Payne” at the Cannes premiere, the film, like “About Schmidt,” may have relatively small stakes in a global sense, but for its characters, they are huge. Payne and I spoke over the phone recently about his casting process, his characters' Midwestern stoicism, and shooting in black-and-white.

“Nebraska” is a film you wanted to make for almost a decade. What was it about the script that resonated so strongly?

It’s funny you mention that, because I wasn’t making it for no other reason than I didn’t want to follow one road trip movie with another. Every couple of years, I would dare to read the script again, praying that I had not outgrown it and didn’t want to make it any longer. Mercifully, my interest in it remained. I like in it now what I liked in it nine years ago when I first read it. I liked that it was short and the script was under 100 pages. I liked that the dialogue was funny and deadpan. I liked that it had some sadness in it. What this kid is trying to do for his dad is kind of melancholy, with this trip into the past. I just thought it would make a nice little movie.

With any of your films, how do you know “This is a story I need to tell”?

Every once in a while I need to, but it’s more that I want to. I’m so interested in the act of directing that I just like making movies. Of course, I have to make a movie that I feel connected to on some level, so that I can feel it. I have to feel what’s going on in the movie to be able to direct it halfway decently. My movies aren’t necessarily always considered comedies, but rather funny-dramas, except for “Election” or “Citizen Ruth,” which were pretty out-and out-comedies.

The theme of quiet desperation exists everywhere, but there’s a certain Midwestern stoicism that seems to fascinate you. What draws you back to these characters?

That’s a good one. I hate to cop out, but that’s maybe something more for you to observe than for me to really comment on. I hate to be repetitive, but I guess I am! (Laughs.) I don’t want to say, “I like to do this type of movie,” because I don’t want to box myself into a corner with what I might want to do in the future. Who the hell knows? I’m hoping that with six movies this is just a tiny core sampling of what my output will be. I’m not the fastest director in the West. All I know is, my co-writer Jim Taylor and I, because it kind of starts with him as well, we just somehow find a comic archetype in the protagonist who is experiencing a discrepancy between what he aspires to and who he is and what his real tools are. There’s always humor to be mined in blindness. That’s why we’ve gotten some mileage out of the unreliable narrator in our first films. There’s just something about that guy you’ve described that has become a comic archetype.

Ego and Hollywood beauty seem to uniformly be stripped away in your films. What are your first meetings like with actors?

You mean how do I get them to not want to preen and be pretty?

Is there vanity that needs to be stripped away?

I remember when I was doing “Sideways” and I wanted to cast Virginia Madsen, who is babealicious. Before casting her I had to have a drink with her so we met at the Chateau Marmont, that fancy place. I said, “Look, I really want to cast you.” And she said, “Great, because I really want to be in the movie.” I said, “Great, but one thing is: I don’t want you to wear makeup. I don’t want any glamour-puss stuff with this character.” She looked at me and her face relaxed. She smiled and said, “Really? You mean finally the movie where I don’t have to wear makeup?” It’s like that. People by now know the aesthetic I’m after, which is a vividly photographed banality. Again, I don’t want to box myself in, but with these films to date, they’re financed by studios. They’re American, commercial films, but they should have the patina of the real world, not of movies. Even when Jim Taylor and I write screenplays, our guide to what should happen next is always, “What would happen in the real world?” Not “What would happen in a movie.” It’s the same thing in the production design and the casting. “How would this really be?” That’s why all my movies are shot on location and not on sets. I don’t build anything. In “Nebraska,” there are many locations where nothing is touched. It’s exactly how it is when you find it. Even the abandoned farmhouse, where Bruce Dern’s character grew up, is exactly as we found it.

June Squibb steals scenes from two very funny guys Will Forte and Bob Odenkirk.  Were you immediately confident that she could nail those really bawdy punch lines?

Yes. I was immediately confident when I saw her audition. That character has the most flashily written part, so I needed an actress who would really be able to go to town with that dialogue.

Black-and-white serves as a beautiful backdrop to what is essentially a dying Midwest. Was it difficult to view your home state in this blighted light?

Over time, not just in Nebraska but everywhere, younger people leave small towns, and the small towns begin to be populated more by their older citizens. At the economic times we’ve been living in recently, and especially for this film, black-and-white acquires a kind of Depression-era feel. That aspect had not existed when the screenplay first reached me nine years ago. But the fact that it was in the air when we turned the camera on in 2012 added, I feel, a very interesting comment. Not just on small town Nebraska or small town America, but on the state of the country in general. It’s not a devastating critique in the film by any means. It’s a gentler film than that, but I’m glad it’s there. Even lightly.