When should older rappers drop the mic?

From Eminem to Jay-Z, 2013 has been a banner year for 40-something artists. Too bad none of them kick any knowledge 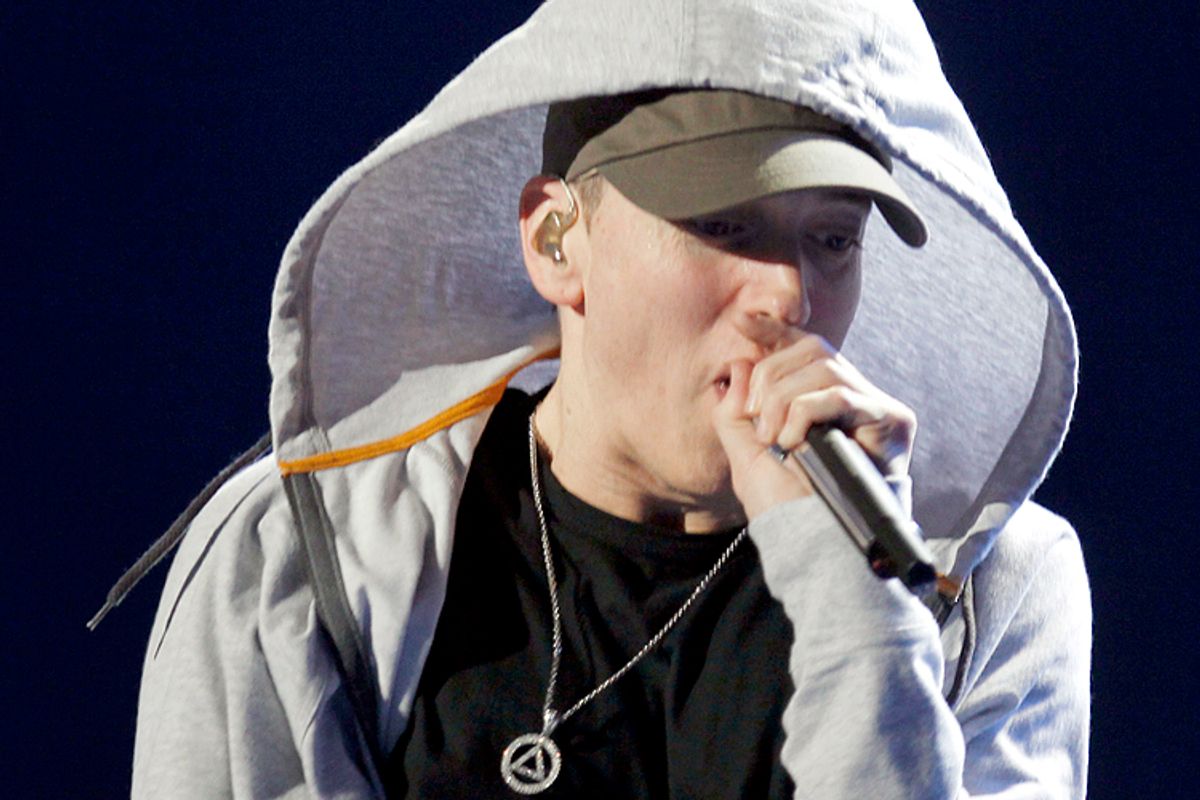 This year has been a big year for the 40-something rap set. Jay-Z, Eminem, E-40, Ghostface Killah, and Snoop (Dogg, Lion, Zilla — his name is a mad lib now) all released albums. At best, albums like Ghostface's 12 Reasons to Die and parts of Eminem's MMLP2 offered hints of bittersweet nostalgia. They reminded listeners of familiar stories that held awesome power the first time around. At worst, that nostalgia was nauseating, like listening to a clichéd monologue from a reminiscent uncle at Thanksgiving.

The OGs are approaching middle-age, and none of them seem ready to stop, for better or for worse. While a late-game dud is not going to going to destroy a career, it can easily tarnish perceptions of an artist's overall musical prowess. It's not that older rappers are running out of things to say; these rappers have new and interesting developments in their lives, but these stories are not receiving the spotlight on their albums. Most of their energies are spent rehashing standard hip-hop fodder to reassure listeners that the rappers are still hip and dangerous.

It comes off as very desperate in a way, because, no matter how many ways they say it, none of them are as potent as they once were. Older rappers will need to update their lyrical content to fit the circumstances of their current lives if they want to remain important artists. This is not an easy thing to do given the nature of the genre; hip hop has never had to accommodate active 40-year-old rappers before.

For the most part, hip hop is driven by an angsty teenage mentality. Its two most widespread and recurrent themes are the struggles involved with asserting dominance and wasting money endlessly. The genre is not as cerebral as we'd like to think; a large part of it is action-based and depends on vitality, vigor, and money. Magna Carta Holy Grail hinted briefly at some of the intriguing issues Jay-Z now faces — such as maintaining intimacy with a woman that every other man in the world lusts after, bullying corporate bigwigs in the boardroom, or raising a child in front of paparazzi — but these stories were not told with anywhere near the same meticulous detail and passion as the stories he previously told about making runs to Trenton. On Magna Carta, Jay-Z chose instead to rap about his riches and comes off sounding bored.

On the lifeless and droll hook to "Tom Ford," we see Jay-Z actively bemoaning the fact he had to mention "molly" to seem relevant. By doing so, he skips straight over the easily attainable wise- grown-man status he's earned into geezer territory.

Jay-Z and Eminem have received a fair amount of harsh criticism; the two of them "stink of desperation" and say nothing they haven't "said before in more interesting ways." So many older rappers have proved unable to switch gears, but it's not only rap. Older pop stars such as Madonna continue to push product by exploiting the sexuality that brought them to them top. While Madonna is still looking good, that appeal will fade. Will iconoclasm without the cleavage be enough to continue her career?

Similarly, Eminem's newest album had conviction, but it relied too much on its old ridiculous and meaningless material to make its impact on its audience. MMLP2 did take some worthwhile risks in its content, but the pop star murders are getting a bit repetitive.

In previous musical eras, musicians have been able to remain productive well into their 40s and 50s, many producing their masterpieces in their 40s. Miles Davis wrote Bitches Brew, the most unique and challenging jazz album ever at 44, and birthed the hip-hop beat's first predecessor with "One and One" off On the Corner at 48. Beethoven composed the 9th Symphony at 54. Nas came closest to breaking new ground on last year's Life is Good (he was 38). The rapper's subject matter was real and present in his life, and listeners could feel his words came from the heart.