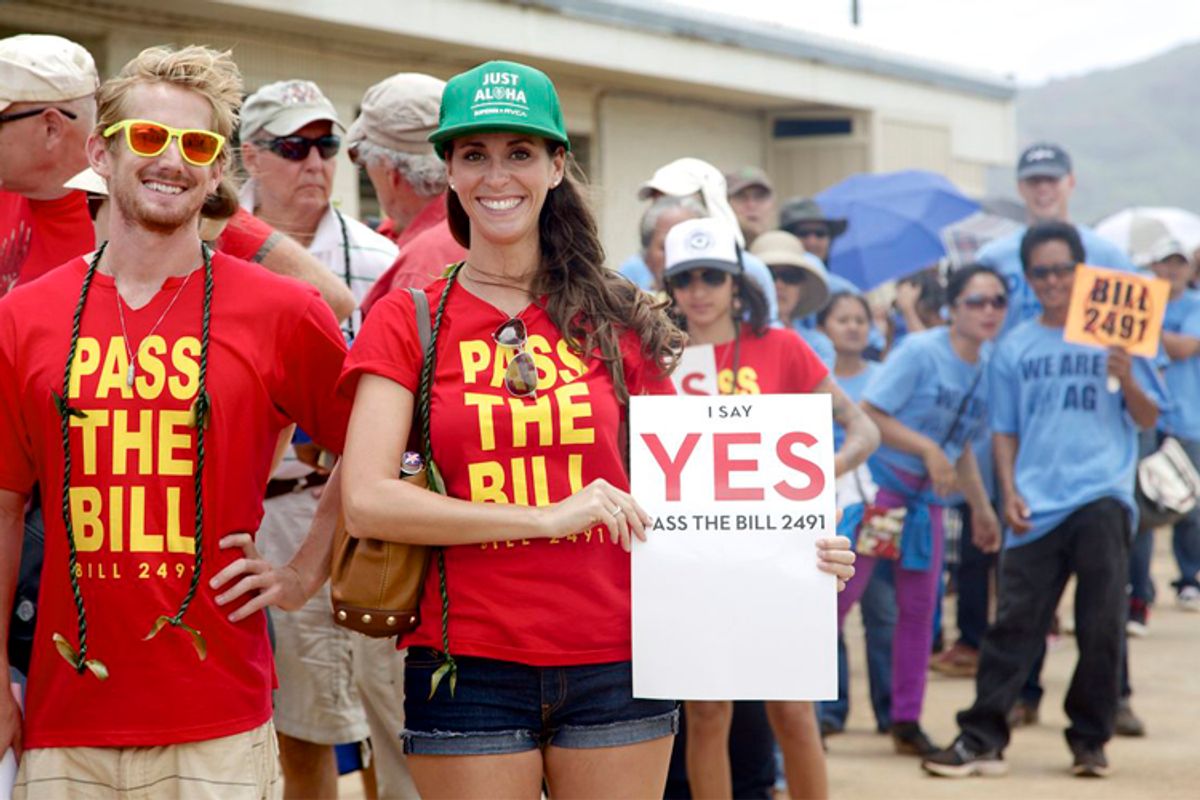 Lawmakers in Kauai today will decide the fate of a hotly debated bill that would require agri-biotech companies to disclose details about the pesticides they are using as well as the genetically modified crops they are growing on the Hawai‘ian island.

There has been increasing concern among Kauai residents about the health and environmental impact of the pesticides used in GMO trail plots and on the seed-corn fields.

Following the recent demise of Washington State’s GMO labeling initiative, Bill 2491 has turned Kauai into the latest battleground in the fight over genetically modified crops.

The bill has had a rocky, emotionally charged ride so far. The Kauai County Council approved it on October 16 by an overwhelming six to one vote after a tortuous 19-hour-long hearing that went past 3 a.m. The hearing had been preceded by months of protests and debates on genetically modified crops and pesticides that set tempers flaring on the usually laid-back island. Then, 10 days after the council vote, much to the dismay of the bill’s supporters, Mayor Bernard Carvahlo, who had been skeptical about the bill from the start, vetoed it.

Bill 2491 requires agricultural companies and farms to disclose the type and volume of pesticides they are spraying, as well as the location of the fields being sprayed. It also requires them to set up buffer zones between fields growing GM crops and public spaces like schools, hospitals, and parks. Companies have to notify the public before spraying pesticides.

“At the end of the day all we are asking for is disclosure of pesticides used and locations of GMO fields, not trade secrets or a total ban on GMOs,” says Councilman Gary Hooser, who co-introduced the bill in June. “All we are trying to do is to protect the health of our community. Frankly, the mayor hasn’t taken the time to understand the issue and he’s surrounded by industry, who are some of the largest employers in the island.”

The proposed legislation mostly affects the four big biotech companies — Dow, Syngenta, BASF, and DuPont-Pioneer — that have operations in Kauai and are heavy users of restricted-use pesticides. Together the companies occupy about 15,000 acres of Kauai‘s agricultural land. Some of this land is leased from the state and the rest from private owners. (The one local company that would be affected is Kauai Coffee Co.)

The biotech companies mainly grow seed corn on the island, which is Kauai’s number one crop. But they also have trail plots where they test genetically modified seeds for pesticide resistance. Hawaii’s warm climate allows for three corn crop harvests in a year, which makes it a perfect place to experiment with seeds.

For example, students and teachers at Waimea Canyon Middle School, which is near a Syngenta field, complained of noxious odors on several occasions between 2006 and 2008. On one occasion, according to locals, the school had to be evacuated and some chidlren were sent to the hospital.

The volume of protests and demonstrations against pesticide use in Kauai has been on the rise.

Some doctors say the region seems to have unusually high rates of asthma, cancer and birth defects. But so far there have been few studies investigating these allegations.

In 2011, residents of the west Kauai town of Waimea filed a suit against Pioneer Hi-Bred International, a DuPont affiliate, citing multiple violations of law in pesticide and land management of Pioneer's test corn fields upwind of residential homes and schools.

“Six years ago, when I had my first child, I began learning about GMOs and realized that there was a lot of GMO in our food and in our fields in Hawai‘i,” says Dustin Barca, a 31-year-old Kauai native who has been organizing marches against GMOs across the Hawai‘ian islands. “That really struck a nerve, because where I live is so important to me. I have a spiritual connection to this land and this is a serous threat to the natural resources that makes our islands so special,” says the pro-surfer and professional fighter.

Barca believes that the bill is just the beginning of a bigger fight in Hawaii against GMOs. The movement, he says, is snowballing. “A year and a half ago we were standing on the street and protesting with 20 people. At the last march we had 4,000 to 6,000 people marching on the streets of Kauai,” he says.

Even Mayor Carvalho has never outright opposed the intent of the bill. Before the council vote last month, he expressed concern about the financial strain of implementing the bill, saying that according to county estimates it would cost about $1.3 million to get the regulations in place. His final veto, however, was on legal grounds. He said that state and federal laws preempted the county in these matters.

“I have always said I agree with the intent of this bill to provide for pesticide use disclosure, create meaningful buffer zones and conduct a study on the health and environmental issues relating to pesticide use on Kauai. However, I believe strongly that this bill is legally flawed. That being the case, I had no choice but to veto,” he had said in a statement explaining his veto.

The biotech companies, meanwhile, have opposed the bill, saying that it unfairly targets their operations. They’ve also expressed concern that the bill could set a precedent, leading other counties, states, or even the federal government to follow suit. They have threatened to sue Kauai if the bill is passed.

When contacted via phone, a Dow AgroSciences employee in Kauai directed the Journal to theHawaii Crop Improvement Association, which represents the seed industry in the state. The association didn’t respond to requests for comment by the time this story went live. Neither did BASF or Du-Pont Pioneer.

The bill’s supporters have said they are ready to face a legal challenge. "We aren't going to be bullied by legal threats; we have four different attorneys who have offered to fight for us,” Hooser says. He says the biotech companies are worried about the legislation because “we are the only community that’s trying to do this in a place where the industry is firmly established.”

Lawyers who support the bill, including nine who had released a joint statement vouching its legal soundness prior to the original vote, say the mayor has been “poorly advised.” “I’m thoroughly familiar with the bill and I’m very comfortable that if challenged in court, it will be upheld,” says Paul Achitoff, a Honolulu-based attorney with the environmental law firm EarthJustice.

Regardless of the outcome today, activists say they will continue to fight for their right to know. Councilman Hooser is already working on a new bill that he will reintroduce in case 2491 fails. There’s talk of a ballot initiative, of suing the state and federal government “for not doing their job and protecting people,” and of more protests out on the streets.

“It will be a variety of actions but I know one thing for sure — it’s not going to stop,” says Hooser. “People are so committed, they are sleeping outside on the steps of the county building to make sure they get in [to witness the vote]. And it’s everyone from doctors and lawyers, to bartenders and carpenters and teachers.”