Betraying any knowledge of political science, media embarrasses itself with a phony frenzy. Here's how bad it was 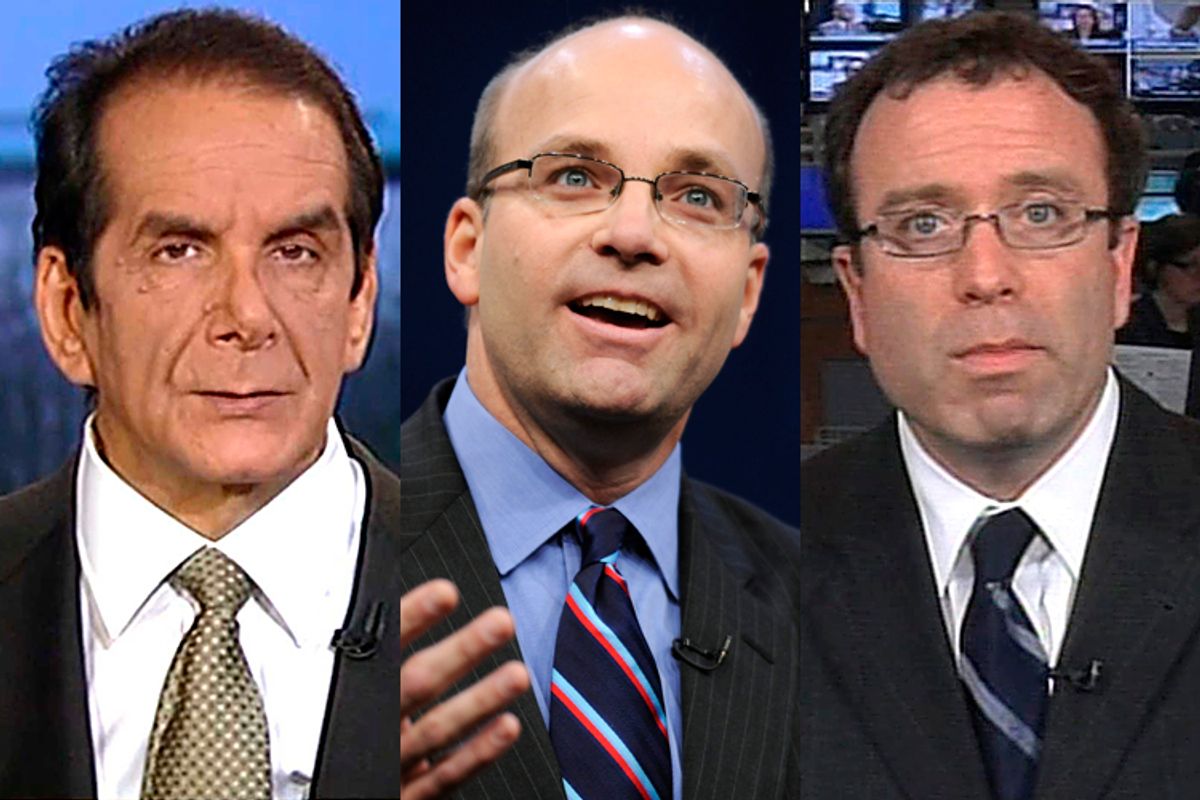 The political press has apparently learned nothing.

It all seemed so positive. Bloggers relying on actual political science (rather than just hunches and manufactured garbage) appeared to be making serious inroads. The Monkey Cage (and my own blogging) are at the Washington Post; political scientists have columns at lots of top sites. A book on the 2012 election by political scientists John Sides and Lynn Vavrick, which argued, in large part, that most of the gaffes and the day-to-day ups and downs of the campaign didn’t really amount to much, was getting terrific reviews.

It’s not just political scientists. Nate Silver and a whole bunch of analysts good with numbers have made reality-based political coverage, I thought, so much better. Ezra Klein’s Wonkblog is excellent. Plenty of top reporters and analysts (Salon’s Steve Kornacki and Brian Beutler very much included) are political science friendly.

And then? This week. In which we were treated to an all-out, no-holds-barred press frenzy. Kevin Drum surveyed what was going on:

Politico, by my count, has no fewer than 14 front page headlines today about the great Obamacare debacle. The Washington Post's four top news articles and its four top op-eds are all about Obamacare, and the top op-eds are uniformly panicky…Ruth Marcus thinks Obama's entire presidency at risk. Ditto for Milbank. And if that's not bad enough for you, Krauthammer suggests that yesterday's events spell doom for the entire liberal project.

Not just conservatives, either; Ronald Brownstein devoted a column to, well, how the entire liberal project was at risk.

It was a frenzy over … exactly what, anyway? The only shred of news about the Affordable Care Act this week to hang all of the hype on was the numbers on October signups, but given the thoroughly covered disaster with the initial rollout, the results were surely no surprise at all. As for the other strand of trouble, the pledge about keeping insurance, that’s been around for a few weeks now and nothing really happened this week to create a bigger flap.

All of which suggests that this is a press story, not a presidency or policy story.

The press is comparing this healthcare disaster (presumably the one that happened six weeks ago?) to Bush’s Katrina. A better comparison might be from the Bill Clinton era: Whitewater.

Now, granted, it’s not true that there’s no underlying story here. The healthcare.gov rollout was a fiasco, and while it’s getting quite a bit better, it’s not a done deal yet. The president’s rhetoric about keeping plans that people liked was worth knocking down, although it was as worth knocking down in 2009 or 2010 or 2011 as it was this week. The continuing horror stories about rate shock and canceled plans? Well, not all of them have been debunked, and some of them will no doubt turn out to be real, even after the exchanges are fully up and running. The press should absolutely be tracking all of this. It’s a big, important story.

The problem is that the big, important story is almost completely unrelated to the press frenzy. As far as I can tell, most of the media riot was set off by a single poll, a Quinnipiac poll, which wasn’t exactly an outlier, but did come in lower than other polls out there (a 39 percent approval rating for Barack Obama, compared with a bit over 42 percent in HuffPollster’s current estimate). That went along with a press narrative that had focused on (very real) Republican problems from the shutdown, without noticing that Obama’s approval also fell during the same time. It all produced a sudden, sharp, shift: “Obama survived the rollout fiasco thanks to the shutdown!” suddenly, overnight, became “Obama’s approval in free fall!” even though there really was no actual plunge.

So why like Whitewater? The last media frenzy about Obama’s collapse (not counting a smaller one over Syria) came in the spring, when Triple Scandals threatened to destroy him. But those scandals fizzled prematurely, leaving the scandal-loving press with a bad case of frustration. Indeed, as Brandon Nyhan was writing before those Triple Scandals, Obama was way overdue for something like that. When it didn’t pan out, the press was presumably still primed for a pile-on, and even though ACA implementation may not have been a promising topic, they worked with what they had.

In other words, it’s like Whitewater because it’s the result of the press primed and ready and waiting for something to blow up around. It’s different because there is a real story here, but that doesn’t seem to have anything to do with how the press is behaving.

Like Whitewater, or like the Triple Scandals from April, the phony frenzy part of this will blow over soon. But not before there's plenty of damage – to the reputation of much of the working press, that is. There’s this week’s real fiasco.