Meet the Catholic extremists who could shatter the church

The Society of St. Pius X has a past of Fascist sympathy and worse. Pope Francis might welcome it back to the flock 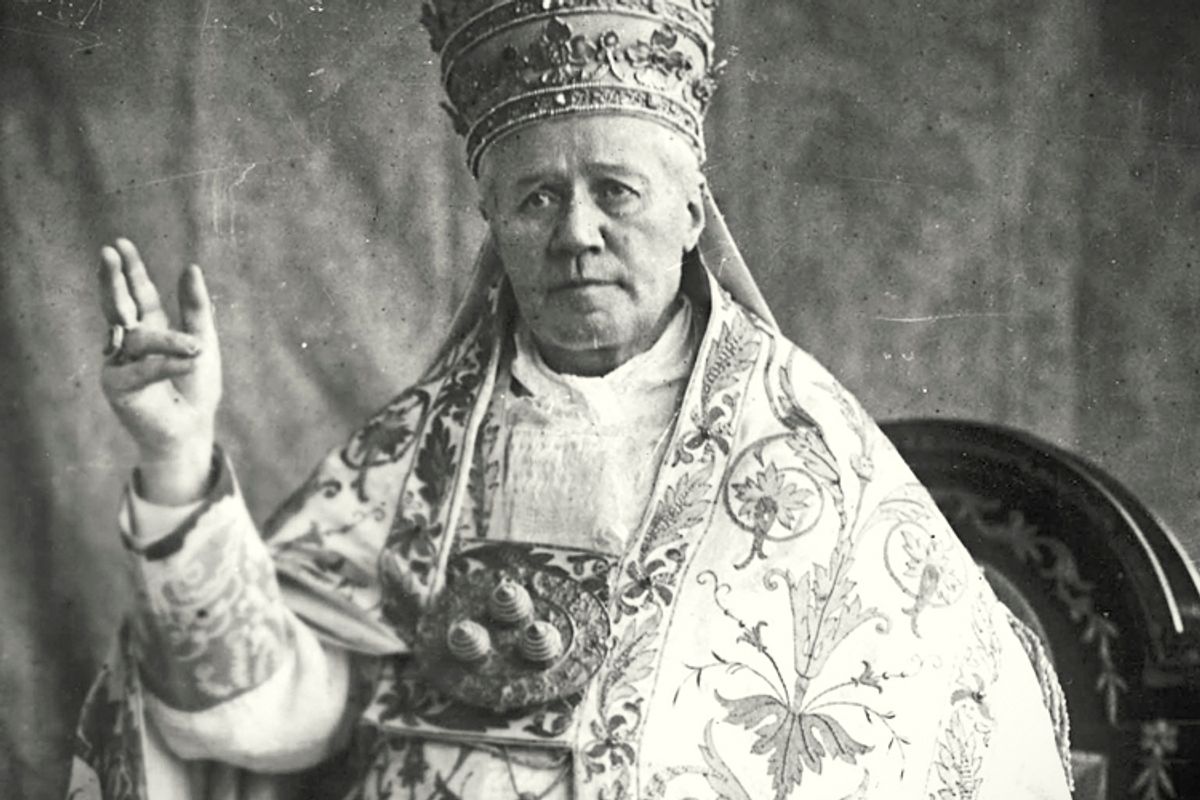 Last month, a 100-year-old convicted Nazi war criminal died in Italy and nobody wanted to bury him. Former SS captain Erich Priebke died under house arrest on Oct. 11, and that’s when the trouble started. Priebke had wanted a public funeral and Catholic burial — in contempt of the standard practice of cremating Nazi war criminals and scattering their ashes to the wind, or tucking them out of sight.

But the Diocese of Rome refused to bury him — as did Priebke’s hometown in Germany and the foreign minister of Argentina, where Priebke (who died unrepentant) lived after fleeing his war-riddled continent. Each locale worried that Priebke’s gravesite could become a shrine for roaming Third Reich nostalgics. The corpse was in limbo, until the Society of St. Pius X stepped in.

The Society of St. Pius X (SSPX) is a fervently traditionalist Catholic sect: a Vatican breakaway with no official Church status, and the cause of much malcontent in Rome. Born in reaction to the Church’s modernizing reforms of the ’60s, the Society soon emerged as a stronghold of the way Catholicism used to be. In the towns and cities where SSPX communities popped up (SSPX claims almost half a million members, hundreds of priests, and a presence on every continent, though the numbers cannot be verified), the group is best known for its practice of the old Tridentine Mass: conducted in Latin, the priest’s back to his congregation, and heavy on the Gregorian chant.

Elsewhere, SSPX is known for other things: like its Holocaust-denying bishop; its anti-Semitic conspiracy mongering (an SSPX leader recently dubbed Jews and Modernists “enemies of the Church”); its rejection of interfaith dialogue; and its insistence that, since the 1960s, the Vatican has taken a turn for the worse. The Anti-Defamation League describes SSPX as “mired in anti-Semitism.” The Southern Poverty Law Center ups the ante, calling “radical traditionalist Catholics” (including, prominently, SSPX members) “the single largest group of hard-core anti-Semites in America.”

And yet, the Vatican wants to make amends. Though a round of official negotiations broke down last year, the Holy See still supports a Pontifical Commission called Ecclesia Dei, which has tried to lead the SSPX flock back into the fold. As recently as January, Archbishop Augustine Di Noia, one of Rome’s top dogs, penned a letter to Society priests, pleading for “reconciliation and healing.”

Meanwhile, there are whispers of a formal “schism” between the Vatican and SSPX followers — and Erich Priebke’s body has been buried in an anonymous grave.

In 1962, the Church opened its first ecumenical council in almost 100 years. Attended by more than 2,500 bishops, the Second Vatican Council (or Vatican II) was meant to reconcile the Roman Catholic Church with the modern world. And indeed, the Council defined Catholicism as we now know it. Vatican II tidied up Church government and encouraged interfaith friendship. Critically, it also ditched the traditional Latin Mass — in favor of a mass conducted in vernacular tongues. (Congregants would now have some idea of what was being preached at them.)

During this time, one Archbishop Marcel Lefebvre grew deeply displeased. Lefebvre had always flirted with the far right (he supported Marshal Pétain’s Nazi-collaborating Vichy regime during WWII) and so it was no surprise when he emerged at the helm of Council challengers. Lefebvre opened his own anti-Modernist seminary (bishops called it the “wildcat seminary”) in Écône, Switzerland. His movement grew, and eventually formalized as SSPX. By 1976, after some tousling with the papacy, Lefebvre was officially stripped of his holy orders. By 1988, things turned really sour. Against the Pope’s orders, Lefebvre consecrated four bishops — leading the Vatican to excommunicate all five. SSPX continued to minister, but without official canonical status.

Today, SSPX describes itself as an “international priestly society” and Catholicism’s lone defender of God’s authentic word. The society is committed to the Latin mass — and staunchly opposes interfaith cooperation. It takes a narrow view of “liberty” and bemoans Modernism’s so-called “over-emphasis on the natural power and dignity of man.”

It was the Latin mass that got Dr. Harriet Murphy, a 53-year-old Brit and former professor of German Studies at the University of Warrwick. (She boasts a doctorate from Oxford University and sabbaticals at the likes of Harvard.) As a young girl, Murphy was sent to a convent school where she received “a classical Catholic upbringing” by “highly-qualified sisters.” After graduating, she went on to study languages — and, eventually, to drift away from the Church. She spent time in America, where “my American friends called me a neocon. I would describe myself as conservative.” She published books and articles on Kafka and Canetti and Nietzsche. And then she found the Church again. Murphy calls it “rebirth… a kind of Damascus experience.”

It was in Austria, on sabbatical, that she first stumbled across a Latin mass — and was overwhelmed by its majesty. “It can knock you off your feet and it certainly did. It was like another Damascus experience.”

As Murphy learned more about SSPX, she found more to like: the “order and dignity;” the “happy families, united parents;” the commitment to charity; the fired-up adherents. She began to attend seminars, retreats, a pilgrimage through Paris. “I’ll remember it on my deathbed, walking by the Arc de Triomphe and all of Paris comes to a standstill because there are 8,000 people walking by with rosaries… singing these incredible hymns that they were singing in 1789 when they hated what was going on in the Revolution.”

In Murphy’s telling, she “broke down” — swayed by allegations that the Church had failed and was failing, and by her own sense that it had “become liberal and wishy-washy.” Eventually, says Murphy, her religious devotion made her work at a small, liberal university intolerable — and so she quit.

Today, her thoughts have changed. “They stole me for fifteen years of my life,” she says, of “the sect.” Murphy describes a kind of indoctrination — fueled by a radical (and, she now believes, incorrect) reading of Catholic texts. SSPX, she says, “can fill you up when you have been a wanderer and lost your mooring… You would really need to be quite clever and sharp to see the errors.”

Over the last several years, SSPX’s antics have snagged widespread attention — to the sure embarrassment of the Vatican. Much controversy stems from SSPX’s old-school anti-Semitism and Holocaust denial. The Society has a long history of Vichy nostalgia; it was revealed in the 1990s that the group had harbored Nazi collaborator and war criminal Paul Touvier. But the situation climaxed in 2009, when SSPX bishop Richard Williamson gave a television interview in which he denied the existence of Nazi gas chambers. (German chancellor Angela Merkel was none too pleased, and had a telephone chat with the Pope soon after.)

Despite all this, negotiations continued. Then Pope Benedict XVI even made some concessions: loosening restrictions on the Latin mass in 2007 — and, in 2009, reversing the SSPX bishops’ excommunications. In 2011, the Vatican presented SSPX with a “Doctrinal Preamble,” a kind of theological ultimatum, which SSPX could accept (heralding union) or reject (heralding schism). But rounds of talks stalled and stalled. “If we really want reconciliation,” urged a May 2012 column in The Catholic Herald, “now is really the time to pray about it.”

Throughout, the point of the whole exercise appeared increasingly obscure. “In a pastoral sense, the door is always open,” cautioned papal champion Archbishop Müller in October 2012. But “We cannot put the Catholic faith at the mercy of negotiations. Compromise does not exist in this field.” The talks have since broken down.

Why is the Vatican bending over backwards for SSPX — reportedly to the chagrin of more liberal-minded Catholic factions? In the view of John L. Allen, Jr., author and veteran Vaticanologist, “[Other groups] represent a pastoral challenge, but the Lefebvrites are a genuine ecclesiological nightmare — legitimately ordained bishops acting outside of the communion with the pope, spawning an entire ecclesiastical structure that Rome is constrained to recognize but cannot control.”

But SSPX poses a doctrinal threat too. Beginning in the ’60s, some Catholics struggled to understand Vatican II within what Rome describes as a “hermeneutic of continuity” — a continuation of Catholic orthodoxy. SSPX speaks instead (and loudly) of a “hermeneutic of rupture” that challenges the Church’s very legitimacy. Is it possible that some in the Vatican are sympathetic to SSPX’s critique? Gavin D’Costa, a professor in Catholic Theology at England’s University of Bristol, thinks that like the SSPX, “there are some senior Church figures who want to emphasize the importance of ‘true’ doctrine.”

But the word of the day is surely "schism." “If you mention the word ‘schism,’ [SSPX members] go absolutely ballistic,” former Society follower Harriet Murphy insists. But D’Costa says “schism is likely” — though he thinks, in the long run, that this will come to weaken SSPX.”

Back in Vatican City, the SSPX’s overt Nazi abetting and unabashed anti-Semitism never quelled the Holy See’s desire for reconciliation. But Pope Francis is a different kind of pope: a pope who understands the field of public relations. Given all this — and, most recently, the Society’s intervention in Erich Priebke’s funeral — can Pope Francis afford to resume negotiations?

Or afford not to. Back in 2009, a French cardinal told journalists that then Pope Benedict XVI knew “the drama a schism represents in the church” — and, for that reason, would “go as far as he could in extending his hand.”

SSPX responded to this article as follows:

Salon’s recent article on the Society of St. Pius X is a mischaracterization of our priestly society.

Firstly, the SSPX was founded in 1970 and approved by the Vatican, to form priests, and has never been in schism.

Secondly, we are not “extremists”, but merely Catholics who follow what the Church has taught and practiced for almost 2000 years; we simply wish to be faithful to Our Lord Jesus Christ.

Thirdly, the SSPX has never been “anti-Semitic”, which is a position that no Catholic may ever hold. The Society’s position based upon the Church’s teaching is clearly stated on our website, but perhaps Salon is unaware of this.

Fourthly, the fact that the Vatican has chosen to undertake discussions with the Society of St. Pius X, proves that the labels bestowed by the Salon article (and other media sources) are false.

Fifthly, regarding the funeral of Erich Priebke, we invite Salon’s readers to our website which offers an interview clarifying the issue. The site also provides many informative articles on the Society of St. Pius X’s history, mission and service to the Catholic Church.

In the midst of the general misinformation circulating about the Society of St. Pius X, we appreciate that both Salon and the article’s author agreed in the spirit of journalist integrity to offer our clarifications for the benefit of its readers.