My kid could be a pundit! 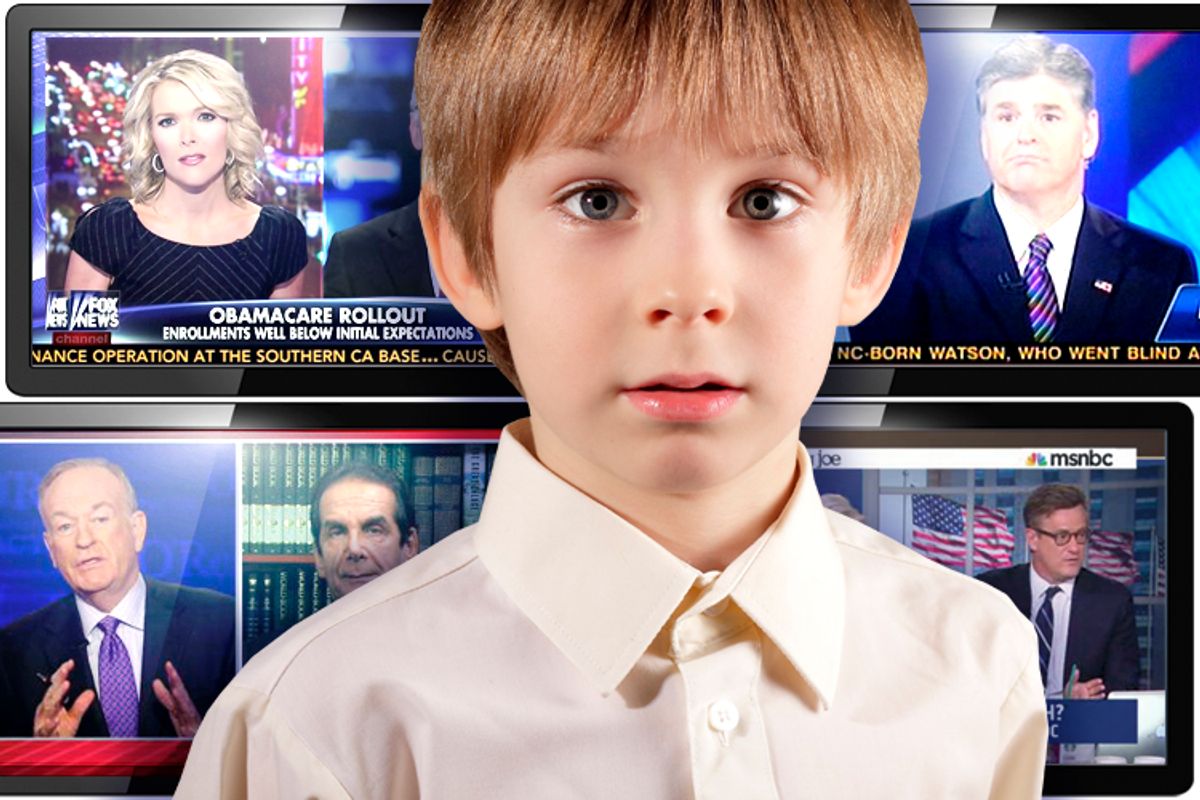 Excerpted from "The Tell"

On Election Day 2012, I drove by scores of political signs and advertisements strategically placed by the road to the polling station near my home. My son and I walked past the numerous green camouflaged military cannons before entering the National Guard Armory, where I waited in line for a couple minutes before the volunteer waved me into the next available voting booth. I was delighted that I could bring my son inside with me.

Afterward, as we were leaving, my son asked me why I voted for one candidate over another for president. I explained the social and economic issues that were important to me. I truly felt as though my choices were rational and consistent with my values. But then I began to question the underpinnings of my choices: was my preference in candidates solely the result of conscious and rational thought, or might I be influenced by superficial factors outside my awareness? I fear that the latter may have played at least some role in my decision making, and it probably does for others as well. But, as you’ll see, superficial variables don’t play a role in the way you might think.

Growing up I always thought of elections as part of the natural world, much like gravity, the sun, and tall sequoias, but nothing could be further from the truth. Humans are unique within the animal kingdom in how we choose our leaders. Bees choose their leaders based on reproductive capacity, and chimpanzees choose alpha males based on size and influence within the group; many human societies choose their leaders based on votes cast by millions of people. Moreover, elections are a relatively recent phenomenon, with representative democratic elections beginning only around the end of the eighteenth century, a blink of the eye ago in the course of human civilization.

Elections are the linchpin between the citizens of a country and the government that presides over them. They give elected officials the power to translate the promises they make on the campaign trail into policy. Political scientists suggest that the very act of taking off work and sometimes waiting in long lines for the privilege of voting has the unintended, yet positive, consequence of bolstering support for the government the people are electing.

I brought my son to the polling station with me for a reason. From early childhood, many Americans are socialized to value and respect the electoral process. Though I was only six years old, I can still remember my mother turning on our thirteen-inch black-and-white television to watch Ronald Reagan’s first inauguration as president. State employees—that is, teachers—bestow on children the importance of a representative democracy in the classroom as well. I was reminded of this two weeks ago while organizing some boxes in my home, when I came across my eighth-grade social studies project, which featured a compendium of campaign paraphernalia from local, state, and national candidates.

The low level of voter turnout in the United States is not for lack of effort on the part of candidates. Most candidates running for election at the presidential, congressional, and gubernatorial levels press the pause button on their personal lives for months, if not years, and take to the campaign trail, expending inordinate amounts of time and energy. And, of course, none of this would be possible on a large scale without the engine for all of these activities: money. “There are two things that are important in politics,” said William McKinley’s campaign manager in the 1896 presidential race. “The first is money and I can’t remember what the second one is.” The amount of money spent in modern campaigns and the time spent to raise it are staggering and have only increased in recent years.

On the campaign trail, candidates try to persuade you, the voter, that they are the best potential officeholders and that their policies will best serve their constituencies. They spend millions of dollars, put in countless hours of work (as do their volunteers), and place their lives on hold to court you all the way to the ballot box. And there you stand in the voting booth, as I did, in early November. For whom shall you vote? Why?

For decades, political science and economics—the fields that predominantly study voting behavior—have largely held that voters make rational choices in the voting booth, that they base their decisions on numerous pieces of information, such as economic conditions and candidates’ policy positions, articulateness, and leadership potential. But could some people vote for candidates based on issues that have little or no substance?

More than at any other time in history, we are deluged with information about what’s happening in the world, from Lady Gaga’s latest fashions to the most recent disaster on the other side of the globe. Political news forms only part of the cacophony of data from myriad confusing and contradictory sources, and even this sphere is filled with innumerable talking heads spouting opinions at a dizzying pace. All of this occurs in a world where people are working longer hours, for less pay, and getting less sleep than at any other time in recent history.

So even though we have unprecedented access to vast amounts of information, U.S. citizens are woefully uninformed about the political process and the positions of candidates running for office. Late-night talk show host Jay Leno occasionally goes out into the streets of Los Angeles and asks random people what seem to be ridiculously simple questions, such as who the vice president is now or who the American president was during the Civil War. A significant number of people do not know the answers.

Studies support Leno’s entertaining, but sad, findings. I could list numerous examples, but consider only a few:

• An astounding 60 percent of Americans cannot name the three branches of government.
• Less than a third of Americans know why Roe v. Wade is significant.
• Only 25 percent of Americans can name more than one of the five
freedoms protected by the first amendment of the US constitution (freedom of assembly, press, speech, religion, and petition for redress of grievances). Curiously, one in five people think the first amendment protects the right to own a pet.

If deciding whom to vote for depends on knowing basic civics, the United States is in a heap of trouble.

When it comes to awareness of more specific information regarding candidates’ policy positions, the outlook is equally bleak. A study conducted just before the 2000 presidential election, in which George W. Bush ran against Al Gore, asked citizens twelve questions about the two men’s positions (e.g., “Do you happen to know whether Bush favors or opposes a large cut in personal income taxes?” “Do you happen to know whether Gore favors or opposes expanding Medicare for retirees to cover the costs of prescription drugs?”). Of the twelve questions posed, most respondents could correctly identify candidates’ positions on only two issues. Less than half could accurately state the candidates’ positions on all of the questions. Studies have documented voters’ ignorance of the issues in more recent races as well, and it persists to this day. It’s little surprise that the thirty-second commercials produced by candidates and their supporters are failing to educate the electorate given their brevity and, often times, lack of focus on central issues.

What are voters to do, given their spectacular ignorance of basic civics and of the policy differences between candidates? Most do what any good human, voter or nonvoter, does; they use heuristics to help them. Heuristics constitute the mental shortcuts we take when making complex decisions. In the realm of politics, we may rely on shortcuts such as party affiliation to help us decide whom to vote for.

I’ll admit that when I went into the voting booth last time, I knew absolutely nothing about candidates running in about half the races. Most of these races were at the local level (e.g., coroner, treasurer). I used the simple mental shortcut of party affiliation to help me decide and chose all of the candidates who shared the party with which I most closely identify. I could have used other shortcuts, such as my newspaper’s endorsement or the advice of a friend with similar political opinions.

Excerpted from "The Tell: The Little Clues That Reveal Big Truths About Who We Are" by Matthew Hertenstein. Available from Basic Books, a member of The Perseus Books Group. Copyright © 2013.