Thanks for nothing, Disney: Hollywood helped make the Tea Party

Ronald Reagan, Barry Goldwater and the roots of modern conservatism were aided by an unlikely source — Hollywood 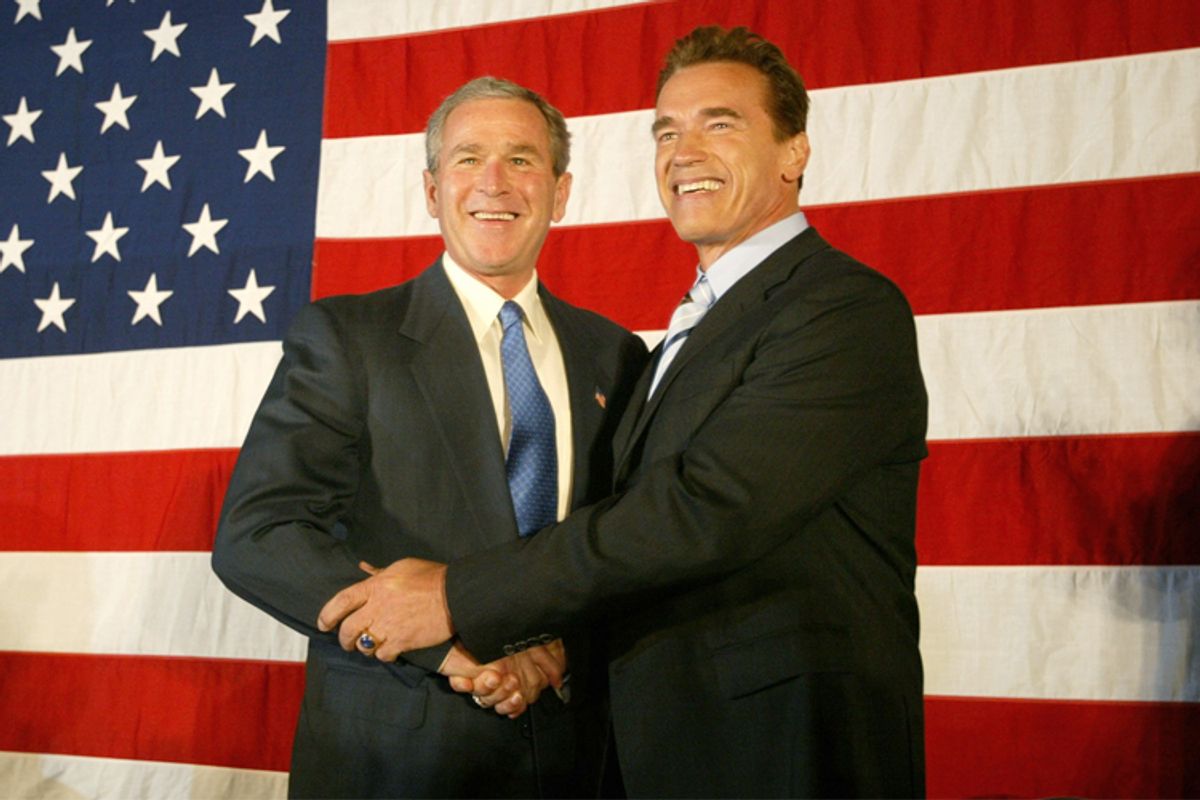 At a gala ceremony in Hollywood last month, the Environmental Media Association handed out awards to Matt Damon, Hayden Panetierre, and director Josh Fox, among others, in recognition of their environmental activism. Fox, who directed the anti-fracking film “Gasland,” expressed the views of many in the audience when he noted in his acceptance speech: “We can have five more decades of fossil fuel expansion or move in the direction of renewable energy. The choice is clear.” A few days later, Sean Penn made an appearance on "Piers Morgan Live" where he joked that members of the Tea Party caucus in Congress are mentally ill and should be institutionalized. Earlier in October, Jennifer Hudson, Olivia Wilde, Scarlett Johansson, Connie Britton and Mia Farrow took to social media and recorded messages encouraging people to sign up for coverage under the Affordable Care Act. In New York City, Cynthia Nixon, Susan Sarandon and Steve Buscemi were among those who campaigned for progressive Bill de Blasio in the contested Democratic primary. And a story in the Hollywood Reporter reveals that Jeffrey Katzenberg of DreamWorks, along with other Hollywood heavy hitters, is prepared to back Hillary Clinton in 2016.

That the entertainment industry leans Democratic and to the left is a well-known fact of American political life. In a new book, though, “When Hollywood Was Right,” historian Donald Critchlow argues provocatively that this wasn’t always true. In fact, he claims, some major GOP victories have Hollywood to thank.

Critchlow’s story begins in the early 1930s. Film production in Hollywood had been going on for about 20 years at that point, starting with the shooting of D.W. Griffith’s 1910 movie “In Old California,” and the founding of Universal Studios in 1912. Prior to the stock market crash of 1929, Hollywood was not a particularly political place. Amid the prosperity of the 1920s, voters throughout California cast their ballots for Republican Party candidates in an almost routine fashion. This was no less true in Hollywood. Movie moguls like Louis B. Mayer of Metro-Goldwyn-Mayer were active in their support of the GOP, given its pro-business stance, but most people in the industry displayed what Critchlow calls a “phlegmatic political attitude.” They were interested in making movies and making money — not politics.

The Depression changed all that. Salaries for actors took a hit initially as ticket sales dropped. Jobs for writers and for those working on film crews became more scarce too, even though many Americans found ways to creatively budget so that they could keep going to the movies, where stars like Henry Fonda, William Powell, Carole Lombard and Shirley Temple helped them escape their problems, sometimes in films with Depression-era themes.

Tough economic times generally favor the left, and as Franklin Roosevelt and the New Deal gained support nationally, they did in Hollywood as well. James Cagney, John Garfield, Orson Welles, Bette Davis and Charlie Chaplin emerged as committed progressives. Within a few years, Works Progress Administration money was flowing into town, funding new artistic endeavors and landmarks like the Hollywood Station Post Office and buying goodwill for the Democrats.

Where liberalism advanced, radicalism gained ground alongside it. For example, the Communist Party was able to land a footing in the Screen Writers Guild. Writers like Dalton Trumbo — who worked on the Oscar-winning films “Roman Holiday” (1953) and “The Brave One” (1956) and was celebrated for his work on “Spartacus” (1960) — became party members.

Despite their differences, liberals and radicals in Hollywood were united in their antipathy toward the free market. Just as important in an industry that was already an ethnic niche for Jews, they also shared an intense opposition to European fascism (at least until 1939, when the Hitler-Stalin non-aggression pact was signed, and those who followed the Communist Party line were instructed to become isolationists). Actors on the right who gave any hint of sympathy for fascism, such as Gary Cooper, fell into disrepute.

The rise of a Hollywood Left in the 1930s provides the backdrop to the first tale of Republican success that Critchlow tells: the defeat of Upton Sinclair in the 1934 California gubernatorial race. Sinclair’s 1906 journalistic novel, "The Jungle," revealed the wretched conditions faced by workers in Chicago’s meat-packing industry. The book prompted a federal investigation and the passage of food inspection legislation. Later, Sinclair moved to California. In the 1930s he proposed the socialization of California factories as part of an “End Poverty in California” plan that, Critchlow says, “attracted wild enthusiasm.” He announced his interest in the governorship, won the Democratic primary, and was expected to defeat his moderate Republican rival, Governor Frank Merriam, much to the horror of the California business community.

The heads of the major studios — who, unlike their employees, were never swept up in the tide of redistributionism — sprang into action. Mayer, Cecil B. DeMille, Walt Disney and Samuel Goldwyn made generous financial contributions to Merriam. More significantly, they threatened to move their business to another state if Sinclair became governor, and produced “a series of shorts to be shown in movie theaters across California… which depicted Sinclair supporters as bums, criminals, and nuts.” The campaign proved effective. Merriam was re-elected. The status quo — albeit a basically Keynesian status quo, since Merriam worked to coordinate federal and state relief efforts — was preserved.

Fast-forward to the 1940s, to one of the most notorious periods in Hollywood history. Communist influence in Hollywood had been limited, but the issue drew national attention. In 1940, Texas representative Martin Dies, who chaired the House Special Committee on Un-American Activities, came to town to conduct a hearing. California state senator Jack Tenney held his own hearings, with the encouragement of Disney. (Disney was concerned about communist infiltration of the Screen Cartoonists Guild.) The issue heated up in 1944 with the formation of the Motion Picture Alliance for the Preservation of American Ideals, a group of fiercely anticommunist conservatives and some liberals that Critchlow conjectures might have been started by Mayer. (Its provenance is uncertain.) Some of the leading stars of the day — Barbara Stanwyck, Spencer Tracy, Clark Gable, Cary Grant — signed on, along with important screenwriters. MPA members met regularly at an American Legion hall. Their goal was to drive communists out of town and out of the unions. These were the early days of the Cold War. Hollywood anticommunists were eager to join the fight.

Partly because of the attention received by the MPA, in 1947 the House Un-American Activities Committee — the successor to the Dies Committee — held hearings on communist influence in Hollywood. With wide media coverage, the committee heard testimony from several witnesses, such as Cooper and Ayn Rand, that communist subversion in the movies was real. Not only were there card-carrying communists in the industry, but anti-capitalist, collectivist messages and lines had sometimes made their way into big studio films. Other anti-communist witnesses, like Ronald Reagan, felt that the problem was a thing of the past.

“Unfriendly” witnesses — screenwriters, mostly — were also called, including Trumbo. They denounced the proceedings as a sham and refused to discuss allegations of their own connection to communism, or the connections of their colleagues.

Studio heads were called to testify too. Mayer and Jack Warner played down charges against the industry. (Disney did not.) The HUAC hearings were bad publicity. Better to handle the problem internally. This the studios did by enforcing a blacklist against the “Hollywood Ten” — the unfriendly witnesses at the hearing who ended up serving prison terms for their unwillingness to cooperate — as well as other suspected communists and fellow travelers. In the minds of studio executives the need for the blacklist was amplified by the outbreak of the Korean War in 1950, which made it more important than ever to root out any possible influence from Moscow, and by a series of bitter strikes that beset the industry in 1945 and 1946; some saw the strikes as orchestrated by the communists. The blacklist remained in effect throughout the 1950s.

While the story of the Hollywood Ten is well-known, Critchlow argues that one of the effects of the Red Scare has not been fully appreciated: through the influence of the Hollywood Right it lent momentum to the political career of Richard Nixon.

Nixon was first elected to Congress in 1946. Although he had the backing of Mayer and DeMille, he didn’t need it. His opponent had been a Sinclair supporter, and the Southern California district they sought to represent was swinging right.

During his time in the House, however, Nixon carved out a reputation for being exactly the kind of Republican who deserved more than token support from the film industry. It’s commonly observed that Nixon came to national prominence as a HUAC member who pursued espionage allegations against Alger Hiss. Nixon’s performance in the Hiss hearings established his credentials as a Red fighter, but Critchlow suggests that more important for studio heads and some other Hollywood anticommunists was that Nixon recognized the delicate position the Red Scare put them in. They wanted a purge as much as anyone but grandstanding risked charges of intolerance or worse. Nixon was sympathetic and made sure to snub more wacko anti-communist crusaders such as Myron Fagan, who saw in the communist menace a Jewish conspiracy. (GOP leaders have always faced the problem of how to handle the far-right fringe.)

This endeared Nixon to the Hollywood Right. Their support would prove essential a few years later when he ran for Senate in 1950. His opponent was a left-leaning actress named Helen Gahagan Douglas. Douglas needed to downplay her liberalism in order to carry the state, and hence could not seek the endorsements of too many stars. Nixon faced no such constraints. DeMille provided major financial support, while celebrities like Irene Dunne, Randolph Scott, Ginger Rogers and Leo Carrillo rallied voters to Nixon’s side. Once elected, Nixon came to see Hollywood’s interests as his own. He “kept up a steady stream of correspondence with actors, studio directors and others associated with the entertainment industry.” In turn, they (along with big money donors like Walter Knott of Knott’s Berry Farm) backed his vice-presidential nomination in 1952, his failed presidential bid in 1960 and his failed run at the California governorship in 1962. (Nixon’s Hollywood support had largely fallen away by the time of the 1968 presidential campaign, Critchlow says.)

There are two other crucial parts of Critchlow’s account, and their names are Barry Goldwater and Ronald Reagan. But I can’t give away everything! Suffice it to say that when conservative stars turned out en masse for Goldwater’s 1964 campaign, particularly in California, they were losing a battle but providing essential ideological matériel for a longer-term war of conservative ascendance nationally. Conservative Republicans learned an important lesson: a little patriotic schmaltz, mixed with celebrity, can make a reactionary message go down better. (My interpretation, not Critchlow’s.) In Reagan, elected governor of California in 1966, Hollywood conservatives found a winner — just as larger cultural forces were beginning to make them seem like dinosaurs to key movie-going (and TV-watching) audiences.

The stories Critchlow tells are fascinating in their own right. From a broader perspective, they also help inform our understanding of the complicated pathways by which some major American institutions — the film industry, journalism, academia — have, over time, come to tilt further to the left (not uniformly, as the book makes clear), while other institutions — religion, law, corporate America and the GOP itself — have come to lean further to the right. It’s easy to bash Tea Partiers in Congress, and they deserve it. But the truth is that the roots of American political polarization and dysfunction are to be found in institutional dynamics that stretch back decades.

Neil Gross is the author of "Why Are Professors Liberal and Why Do Conservatives Care?" He is a visiting scholar at New York University’s Institute for Public Knowledge and professor of sociology at the University of British Columbia.