Pop culture likes to depict ladies with tiny Yorkies. But there's something great about a pet who's a gentle giant 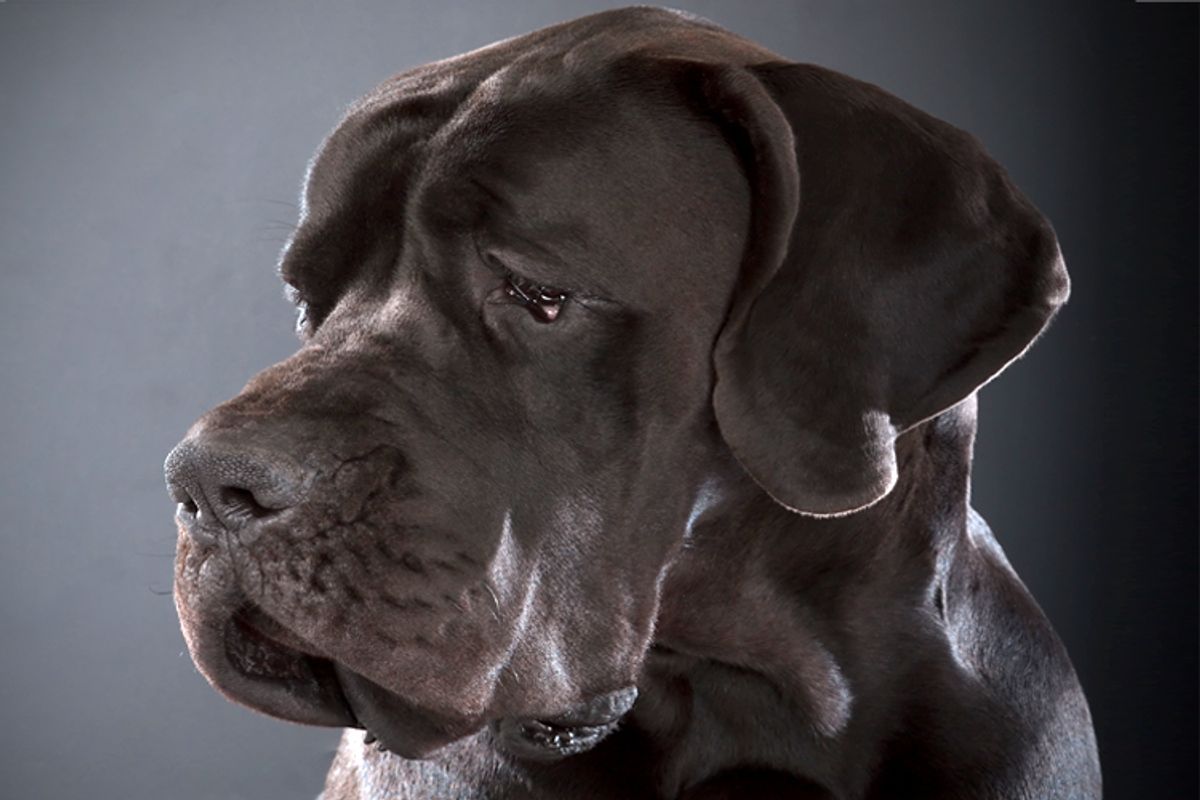 When I saw my dog, Daisy, for the first time on the street in Brooklyn, she was tied up to a fence with a number of other pit bull mixes. She was the only puppy. She had a softer head, not as broad and chiseled as those of the other pits. She slept in the sunshine, the warmth of the sidewalk cradling her. A woman, whose name I cannot remember, deemed herself the neighborhood adoption center. Police officers and friends dropped off stray dogs to her in the middle of the night — mostly pits. That day she had 14 dogs in her tiny apartment. When I pointed to Daisy she cooed, practically lovesick. “She’s the kind of dog you want to run away with,” she said. “A lot of people want her.”

I could see why. Her tiny snout was white and angelic, her brow was wide and dark. A true mix of power and honey, her muscles contracted below her puppy ribs. In the past, I had owned Golden Retrievers and English Springer Spaniels, both breeds known for their passivity. It was 1998, a time when pit bulls were all over the news for being street fighters. But as I gazed at the line of dogs tied up to the fence outside of Borough Hall, I dreamt about this puppy looking for a home — and all I knew was that I wanted to give her one. Daisy died just last month at 15.

Daisy followed me through two marriages, one divorce, two children, two houses, graduate school and a major home renovation. At 56 pounds, she was my protector, my alarm system, my Brienne of Tarth. When Daisy ran to the door — even in her old age when she was basically deaf, her eyes were stricken by cataracts and she limped from arthritis — delivery men, the UPS guy, the plumber, moving truck dudes, all the strange men still wanted to know if my dog would bite. "Only if I want her to," I'd say. Little did they know my nickname for her was "The make-out dog." This dog only wanted to kiss.

In pop culture, we’re bombarded by images of women with small dogs — Yorkshires, Pomeranians, Maltese — dogs that can fit into a carry-on bag or a purse. Dogs that represent our feminine, delicate flower sides. A few famous women have managed to shake that image. Jennifer Aniston had a terrier, Norman, and inked his name on her foot after he died at 15. Grace Kelly had a Weimaraner. Jessica Biel owns at least one pit bull. Chelsea Handler owns two large-breed rescues. One of them, Chunk, even has a Twitter handle.

A woman owning a big dog or a dog considered to be “aggressive” by the public was once thought of as a statement of dominance. Yet I spoke to a dozen or more women who agreed that their big dogs had nothing to do with a power trip. Their big dogs were “gentle giants,” or “gentle and kind” or described as sweet family dogs who were lazy around the house, or who took up most of the bed. My friend Eliza, a writer, says of her now deceased 110-pound German Shepherd-Great Dane mix, Maudsley, that she loved him in part because he was massive. “When we spooned he was substantial. He was a big, sturdy, muscular boy, which only made his sweet, inquisitive and gentle demeanor more amplified.”

Sure, most women said their big dog made them feel more safe (though my friend said her 40-pound Brittany has intimidated people as well) when running outside or walking. But most women chose their big dogs based on their relaxed nature — not for protection. “[Our Great Dane] is very easy-going and friendly so we don't hesitate to take her to the hardware store or the park,” says Rachel Berry of Boulder, Colo. “Big doesn't equate aggressive.”

Same goes for Marci O’Connor, a Canadian writer who told me about her two 80-pound Labernese dogs. (Labernese is part Labrador Retriever, part Bernese Mountain Dog.) “I specifically chose big dogs because I wanted them to be robust for the kids' sake and also offer the illusion of safety for me. I often run at night and usually take at least one of them with me. I have had strangers knock on the door and are hesitant to come inside because of my dogs and I never correct them by telling them how sweet they really are.”

The other popular “big” dog among women I spoke to is pit bulls. I use big in quotes because compared to a 140-pound mastiff, pits, which can range from 25 to 80 pounds, fall under the category of “big dog” purely by reputation. Though over the past 20 years we’ve seen all sorts of awful news stories about pits — just recently, a pit bull was shot and left for dead on an Arizona mountaintop until a female hiker found him, carried him down the mountain for an hour and then adopted him — pits were known as “nanny dogs” in the late 1800s. (Google “pit bull nanny dog” and you’ll find countless black-and-white images of babies, toddlers and their pits.)

Women I talked to were passionate about their pit bulls. One woman found her calling to be a pit owner after hearing about Michael Vick’s dog fighting case. Another owner/rescuer, Laura Gonzo of Greensboro, N.C., says that while volunteering after hurricane Katrina, she wanted to work with pit bulls because she noticed they were “having a harder time than other breeds.” There seems to be an undisputed element of caretaking that’s tied to a woman who owns a pit bull. I’m not suggesting at that men aren’t caretakers, but our maternal instinct is hard-wired — it’s not something we can just switch off. As Jody Sidote, a former animal control officer, told me, “A woman's relationship with her pit bull is based on trust and loyalty. And I have come to know no other breed who exhibits the qualities named, who in most cases has no good reason to trust us at all any longer.”

But women also loved their pit bulls' baby-like nature. As one woman who has owned at least six pit bulls told me, “They are chunks of muscle -- sweet, kissable blocks of love.” Anna Jane Grossman, co-owner of the dog-training academy School For the Dogs in Manhattan (who currently owns a small dog) explains it best: “I feel like I’ve taken naps with pit bulls that I’d call epic. They feel so good to hold and get close to.”

I had always considered myself a big-dog person, but after speaking to so many women for this story, I couldn’t help but wonder if there was a clearly defined personality trait that prompted a woman to want a big dog or choose a dog that’s (even falsely) deemed “aggressive.” Are women who love big dogs by nature more cuddly? Are they more active? Are they caretakers, as I touched on earlier? Maybe women who love big dogs are “strong by nature and not afraid to take on challenges,” says Lisa Cecchini, a board member of Big Dogs Huge Paws, a rescue dedicated to saving and rehabilitating giant breeds. I suppose I related to that sentiment when I found Daisy. Daisy was a little edgy when I adopted her in pre-hipster Brooklyn. Maybe I wanted to convey some of my own gritty feelings through her. Maybe I wanted to care for something that seemed so lost.

This is not to suggest that women who have small dogs should be taken less seriously or that they aren't powerful. Some small dogs pack an intimidating presence (bulldogs, for instance) — so can petite women. (I’m thinking Noomi Rapace, who played Lisbeth Salander in the Swedish version of "The Girl With The Dragon Tattoo.") But some women, especially those who live in cities, like Grossman, for example, choose small dogs because a large dog is more challenging with limited square feet. There are also plenty of uber-business women who own miniature dogs, like Laura Wellington, CEO of The Giddy Gander. And of course, Oprah Winfrey has been dedicated to Cocker Spaniels for decades. Yet for some women, there's something appealing about having a pet that looks scary, but is actually sweet. Says Jen Gronick of her 165-pound Bernese and Pyrenees mix, "We got him because [my husband and I] agreed on the breed and he was also a security factor. No one is gonna mess with the house with the giant!"

Just to further my curiosity, I took a dog personality quiz on Dogster, knowing each question would try to fit me into a somewhat restrictive algorithm. (Q: Which drink is your favorite? A: Margarita; Q: What’s your favorite work out? A: Yoga twice a week.) Big dogs, I thought, are of course associated with people who are laid back, environmentally conscious, gentle, kind, playful, sweet. I was all of those traits. Wasn’t I?

In a million years, I wouldn’t have anticipated the result: I was Chihuahua.