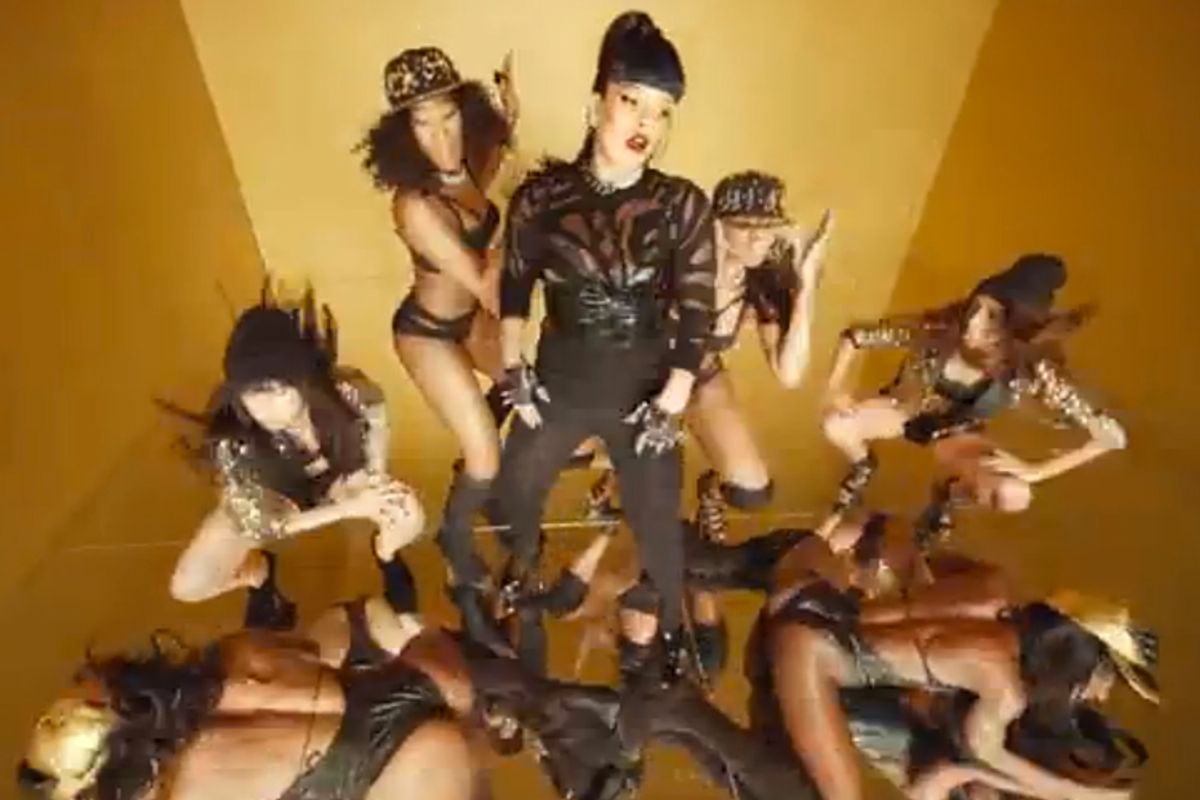 I proudly affirm myself as a feminist woman, even though the oft-dreaded "F" word often evokes volatile, visceral responses. I believe that all women, including women of color, lesbians and trans women, deserve access to the same rights, liberties and resources as men. There are times, however, when I question whether I’m meant to be part of the “Feminist Movement” or if I want to defend what others call “feminism.”

Most recently, I found myself conflicted when singer Lily Allen released a video for her newest single, “Hard Out Here,” which many are claiming is a modern feminist anthem. I definitely align with those who disagree with this assertion, as I don’t think it represents my feminism. (In my early discussions about Ms. Allen’s video, I noted that there were several black women who didn’t see any problem with it. The beauty of art is that it is left up to the consumer’s interpretation and the interpretation I present is merely my own.)

The video opens with Allen on a surgeon’s table, receiving liposuction. She glances over at a television that shows mostly black women dancing seductively while wearing skin-baring outfits. She rolls her eyes. She begins to sing the song and gets to the line “Don't need to shake my ass for you 'cause I've got a brain.” This is where I paused. She just showed four black women shaking their asses on the screen, so was she ... suggesting those women don’t have brains? Maybe, maybe not, but the imagery seems to suggest that what those women were doing was a problem (hence the dismissive eye roll). The scene transitions to those same women (and a couple of presumably non-black women) becoming Allen's backup dancers as they perform choreographed dance routines.

Later, we find Allen in the “kitchen” polishing up flashy car tire rims with gold bricks and bottles of champagne on her countertop. We know that a lot of rap music has included bragging about material items, including cars and expensive alcoholic beverages; that’s been an essential element of the music since its inception. As hip-hop, the culture, was born out of resistance to racial, ethnic and class oppression, the exaggerated emphasis on the possession of material goods has been a defining, ever-present trope throughout the music. Have some people gone overboard with it? Absolutely. But is there a larger context for the fixation on these items and their connection to assertion of masculinity and the construction of manhood? Yes, and in mocking it here, Allen is placing her brand of feminism as opposite to hip-hop culture when, despite a great many instances of misogyny, hip-hop has included a variety of black feminist voices throughout its history. Artists like Missy Elliot have used the word “bitch” in their music, while performing empowering anthems for women that celebrate sexuality and reject physical beauty norms. Interestingly enough, Allen dons an “ethnic” hairstyle Elliot made popular in a video over a decade ago.

After the kitchen scene, Allen appears next to a black woman, dressed in bra and panties, and pushing money down her bra, while singing a song that is a spin on “It’s Hard Out Here for a Pimp.” I paused again. Next we see a group of women, mostly black, dancing around an expensive car. One is front and center with her behind facing the camera, jiggling, another is pouring champagne all over herself while grinding, and yet another is sliding herself around the ground. Then we see one black woman pouring champagne on another’s behind as she shakes and jiggles it: more critiques of the imagery in rap videos.

During all of this, the one non-black woman is obscurely placed behind the car as the others more visibly perform these “satirical” gyrations. Allen stands in the middle of it all wearing a long white mink coat (a clothing item often associated with pimps) and throws money at the black women as they dance in front of her. In the next scene, the women regularly thrust and pat their crotches as Allen repeats “Bitch, bitch, bitch, bitch...” I don’t think I’m reaching when I say that there are heavy not-so-subliminal messages in this video and that it isn’t simply about “satire.”

Allen carelessly uses black women as props in her attempt to make points about the exploitation of women in music videos, but it's troubling that she focuses her attention on rap music and black women. It is as if she is propping herself up as a savior of these misguided sistas who could be using their brains instead of shaking their asses for money. Yet, there she stands, throwing cash at them as the “pimp.” Indeed, Ms. Allen is pimping black culture for her own career advancement. She’s been out of the limelight for a while now and she returns to the scene, hopping on the same bandwagon she chastises Miley Cyrus for exploiting. In her non-apology for the video, though, she essentially places the responsibility for the imagery on the dancers who agreed to be in the video, as she professes her color-blindness and equal opportunity approach.

Perhaps we need more context. Last summer, Allen, in a back-and-forth online battle with black female rapper and singer Azealia Banks, posted a picture of her husband’s penis, painted brown, with what appeared to be an afro on the tip and an exaggerated large mouth, not unlike images of blackface we’ve often seen in minstrel shows. That was, allegedly, her interpretation of Ms. Banks. In a statement responding to the criticism of the video, Allen says, “The video is meant to be a lighthearted satirical video that deals with objectification of women within modern pop culture.” What goes unsaid is how much of “modern pop culture” is influenced heavily by hip-hop culture and ultimately black American subcultural nuances.

Allen has “race issues”; let that be known. Posting a picture of her husband’s penis in blackface and referring to it as a caricature of Ms. Banks proves this indubitably. And nowhere in the video did Allen make any references to how women have been objectified in other music genres or by non-black artists. She fits in digs at Thicke and Cyrus, yes, but each performs music that has long been defined and shaped by black artists. Cyrus even allegedly asked producers for a “black sound.” Allen's lack of references to non-black pop culture makes her video a critique of how black women present themselves or are represented. Allen clearly has issues with all of it.

There is nothing wrong with shaking your ass. I try to shake my ass at least once a day, as a stress relief. There is nothing wrong with dancing provocatively and making money for it, if that is what one chooses to do. Last time I checked, being an erotic/exotic dancer was a perfectly legal career choice and being a backup dancer affords many people the opportunity to tour the world while doing what they love. For some reason, though, when black women perform in ways that display ownership of their bodies and sexuality, people automatically deem it degrading. It’s as if black women are incapable of making their own decisions when it comes to their bodies, so when they dance in sexually suggestive ways, it must be because they’re being exploited or because they lack self-respect.

If Allen wants to criticize the ways in which women are portrayed in modern pop culture, she might want to look in the mirror. The last time I checked, she is a pop culture figure and she painted her husband’s penis in blackface to represent a black female pop artist. Doesn't this make her part of the problem as well? Or does she get a pass because she is white, carries extra weight, is a mother, and whatever else she thinks makes her a feminist role model? I caution those who rush to defend Allen’s video to consider the context, and how the imagery might be offensive to women who are tired of constantly being used as props and background, comedic devices to propel white women to mainstream stardom. Cyrus, Allen and others are sending the message that if you want to make it into the spotlight, you need to juxtapose black with white -- and you need to make sure white is front and center.