If you like "The Walking Dead," you'll love this addictive comic 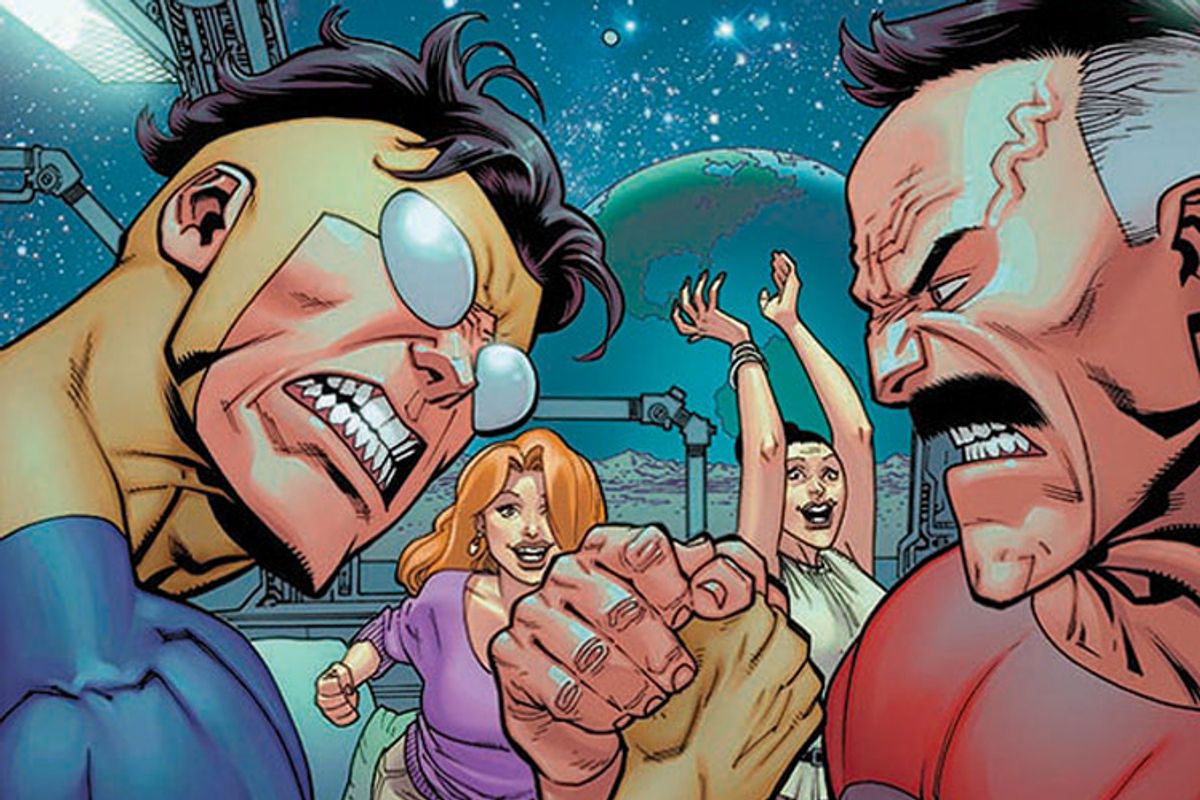 The premiere episode of the fourth season of “The Walking Dead" featured a unique bit of product placement. As sword-wielding badass Michonne returned to the prison after unsuccessfully hunting for one-eyed wacko The Governor, she brought goodies for the group. Among these goodies were comic books for young Carl Grimes. The only visible comic? An issue of “Invincible,” the other long-running Image Comics series by "Walking Dead" author Robert Kirkman.

Here’s another fun fact about “Invincible”: It’s better than “Walking Dead.” And if you enjoy the show — or superheroes, sci-fi or comics in general — you should give this series a shot.

Like “Walking Dead,” “Invincible” is the story of a father and son. “Walking Dead” features increasingly unhinged Rick Grimes and his young psychopath-in-training son Carl. “Invincible” features Mark Grayson, the son of Omni-Man, a Superman-type hero from another planet (Viltrum). Both series have a large cast of heroes and villains, many factions struggling for power, plus a lot of fights — gory, brain-splattering fights. Both have shown tremendous longevity for independent comic books: going over 100 issues is rare and impressive. For Kirkman to have this kind of success with two different creator-owned series makes him something like the Phil Jackson of independent comics.

Other than that, the series are as different as night and day, and “Invincible” is definitely the day compared to the bleak, black-and-white, relentlessly grim world of “Walking Dead.” While the latter has some great characters and a unique premise, it doesn’t have many colors in its palette, literally or figuratively. The comic is even bleaker than the TV show, if you can believe that. “Invincible,” meanwhile, is using a full crayon box: the art is eye candy in the best sense, while the diverse characters go through a wide range of experiences, from grief-fueled alcoholism to revenge-fueled supervillainy.

For example, a typical “Invincible” issue includes Mark dealing with his doozy of a father, the difficulties of rooming with a friend, or some Archie-style romantic shenanigans — all the while saving Earth from villains such as Angstrom Levy, the Lizard League, or Conquest, a scary-as-hell Viltrumite. This contrast brings to mind classic teen-hero fare like “Buffy the Vampire Slayer” and the original Spider-Man stories, as well as the Brian Michael Bendis and Mark Bagley Ultimate Spider-Man run, which reimagined Spider-Man’s early years in a contemporary setting.

Pre-”Invincible,” I thought I’d enjoy reading about a teen hero as much as I’d enjoy drinking paint, but once I started digging into Mark’s problems with grumpy teachers and interdimensional portals, I felt like I was being sucked into an interdimensional portal myself. The balance between fun and serious, between real-life situations and superhero adventures, between heroism and despair, is impressive and absorbing. Like a Buffy Summers or Peter Parker, Mark Grayson is someone you can identify with as both a relatable person and fantasy surrogate.

“Invincible” also compares favorably to other superhero fare, especially from Marvel and DC. While there is some amazing work being done in mainstream superhero comics right now — especially on “Daredevil,” “FF,” “Hawkeye,” “Superior Spider-Man” and (until recently) “Batwoman” — the need to maintain the status quo in corporate-owned comics always imposes limits, which might be why some of the best Marvel and DC stories are outside continuity, like Frank Miller’s groundbreaking “The Dark Knight.” Kirkman’s superhero world is his world, allowing characters to evolve as necessary for the story. I got hooked on “Invincible” while savoring the last episodes of “Breaking Bad,” and it occurred to me how similar TV and comics are when done well (and probably when done poorly too). Just as Walter, Skyler, Jesse and Hank genuinely change, so do Mark and his cast: there’s no reset button at the end of every episode or arc. “Invincible” should be refreshing to comic book readers used to static, repetitive, predictable stories.

Longtime comics readers should also appreciate many little nods to comics history. Mark Grayson shares a name with Dick Grayson: the first Robin and original teen hero, who was also the first hero to grow up to some extent, becoming Nightwing and, when Bruce Wayne has been missing or “dead,” taking the cowl of Batman. Mark’s dad Omni-Man looks exactly like Spider-Man nemesis J. Jonah Jameson, which always cracks me up. The whole “hero from space” thing is obviously Superman-ish, and there are nods to “Watchmen” and even “Y: The Last Man,” Brian K. Vaughn and Pia Guerra’s story of a world where men have been wiped out, except for one dude and his pet capuchin monkey (another series I think is better than “Walking Dead,” but that’s an argument for another day).

Another point in favor of “Invincible” is that it’s as much a sci-fi comic as a superhero comic. The Viltrumites are a huge part of the story, and there are several recurring space aliens, such as the awesomely named Allen the Alien, a shape-shifting Martian turned superhero, and the Sequids, a slimy race of mind-controlling critters who seek to — of course — enslave us all in a Borg-like group mind. (FYI, I’m pretty sure Mark Zuckerberg is a Sequid.) So if sci-fi is your bag, that’s another reason to check this series out: it’s another element that elevates this comic over “Walking Dead.” There's so much more going on in “Invincible.”

That’s true visually too. Co-creator Cory Walker’s art is good and obviously important since it builds this world. But just as the story eventually gets more intense and compelling, the art kicks up a notch in issue #8 when Ryan Ottley takes over. Ottley has handled most of the series since, and his work is mind-blasting: clear and simple, yet somehow otherworldly and cosmic. When gazing at some of his larger panels, you just want to hold the page back a few inches and stare at it for an hour, drooling. Ottley is right up there with some of the best artists in comics today, like David Aja, Michael Allred, Chris Burnham and Chris Samnee — and like those folks in particular, he brings a sense of fun and power to the page. As impressive as superhero movies have become, it’s hard to believe they’ll ever have the punch of an artist like Ottley.

Given the huge success of “Walking Dead” on AMC, I assume “Invincible” will eventually be adapted to TV or movies, but don’t wait for that. Get this comic. You’ll feel like a kid again — maybe even more than the first time.