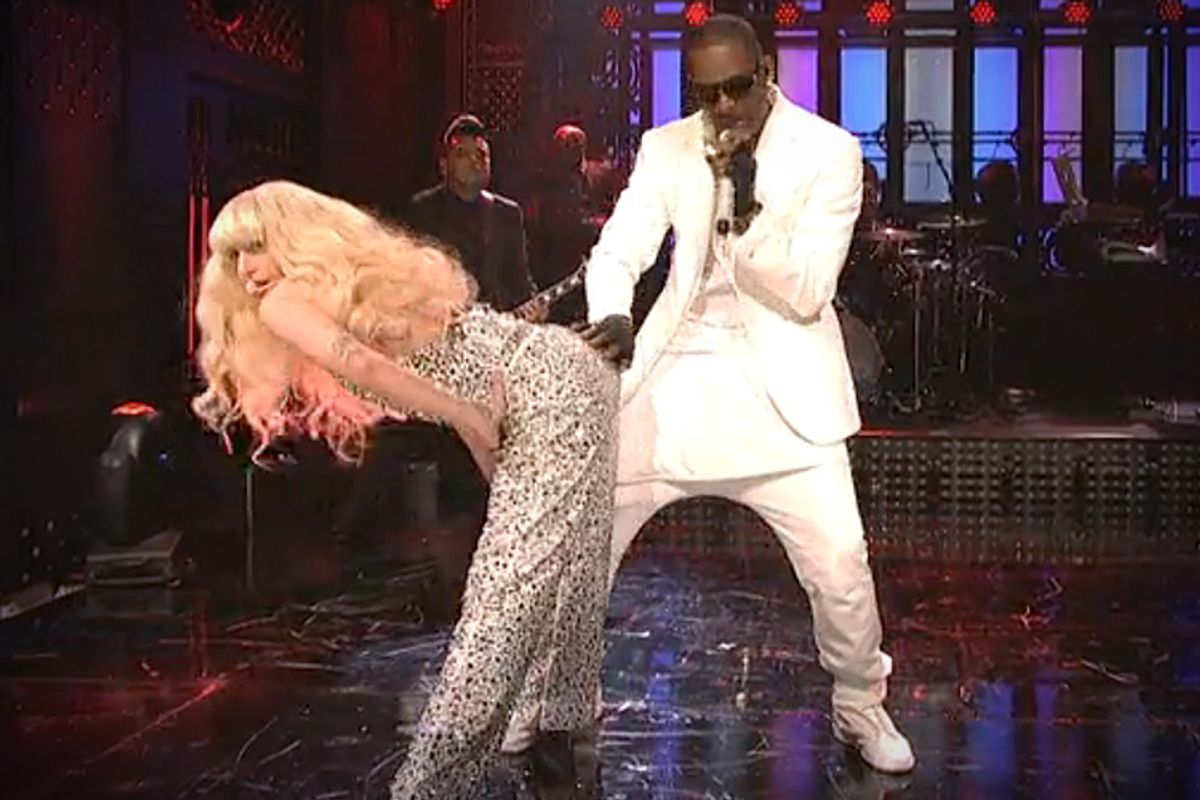 Given that Lady Gaga was once considered the most important pop star on earth, her apparent decision to follow Miley Cyrus' lead is somewhat dispiriting.

While performing as the musical guest on "Saturday Night Live," Lady Gaga did an inept duet with R. Kelly, the sort of performance that exists solely to get people talking and generate articles like this one by dint of its self-conscious bid for "controversy." Gaga caterwauled her current single "Do What U Want," alone onstage at first, grabbing her crotch after she sang "Do what you want / What you want with my body / Do what you want / Don't stop, let's party." When R. Kelly joined her onstage, Gaga jumped onto his shoulder in a prone position; she then bent over fully as R. Kelly touched her posterior, then the two simulated sex onstage, with Gaga lying on the ground as R. Kelly did pushups over her.

The reason for this Parents Television Council-style breakdown is not because of inherent prudery but because such obvious salaciousness is something of a surprise coming from Gaga, a musician who's made a career out of wearing obvious, outré fashions and singing about her love for her audience, not male attention. Those past performances, as with the flawlessly executed quick-change act at this summer's Video Music Awards, used skill and the desire to impress to be about something other than themselves.

"Do What U Want" on "SNL," however, was thuddingly obvious in just the Cyrus manner, right down to the signifiers. In both cases, a younger female pop star performed alongside an older male star with a reputation, in life or in art, far raunchier than the pop star's; both women seemed to be making up their dance moves as they went along, and got a cheap hit of danger from the whole thing. Miley Cyrus, famously, twerked; Lady Gaga bent over and sort of lazily shook from side to side, as though she hadn't gotten the knack yet.

But Cyrus' performance was, perhaps, even less charged than Gaga's; the elder pop singer made an impression by cannily collaborating on a song about consent with a man whose alleged sex tape involving a young teenage girl still looms large in the public imagination. The deployment of a black man who throws a prone white woman over his shoulder should be lost on no one, either; R. Kelly's alleged past deeds entirely aside, Gaga is exploiting, artlessly, stereotypes of black male sexuality in order to convey danger and raunch. Gaga knew what she was doing in performing this song with this person in just this manner; she wanted to exploit R. Kelly's reputation as well as the setting in order to generate ink.

And yet the song, oddly enough, deserves much better. "Do What U Want" isn't just a very listenable single (so much so that it became Gaga's current single at the very last minute); it's also a song-length double entendre, comparing Gaga's treatment at the hands of a lover with her treatment in the press. She's consenting to be torn apart in the press for her physical appearance or behavior: "Write what you want / Say what you want about me / If you're wondering / Know that I'm not sorry." But her joyless performance read less as unapologetic for being herself than a desperate attempt to become someone else; Gaga was less inviting the press to do what they wanted with her than begging for a specific reaction. When, at the end of the performance, she sang, "Do what you want with my body, world," the "world" didn't land; the balance was skewed. In an attempt to get some of the Miley Cyrus frisson ("ARTPOP," the Gaga album, is projected to sell less than Cyrus' "Bangerz" did in its first week), that wittiest of pop stars remade herself into a single entendre.

This is the coin of the realm in today's pop scene; one doesn't need to be a prude to be frustrated by the degree to which "sexy" has become conflated with gaudy, lazy showiness. Gaga, known for her imaginative performances, stopped planning this performance as soon as she decided to just lie down on the stage and let R. Kelly pump up and down over her body. It's hard to believe that, in planning her album "ARTPOP" as a purported statement on the state of music and art in 2013, this had been what she wanted.