The day my mother's legacy was stolen

Her jade bracelet was supposed to be mine someday, a reminder of my Chinese heritage. Now a memory will have to do 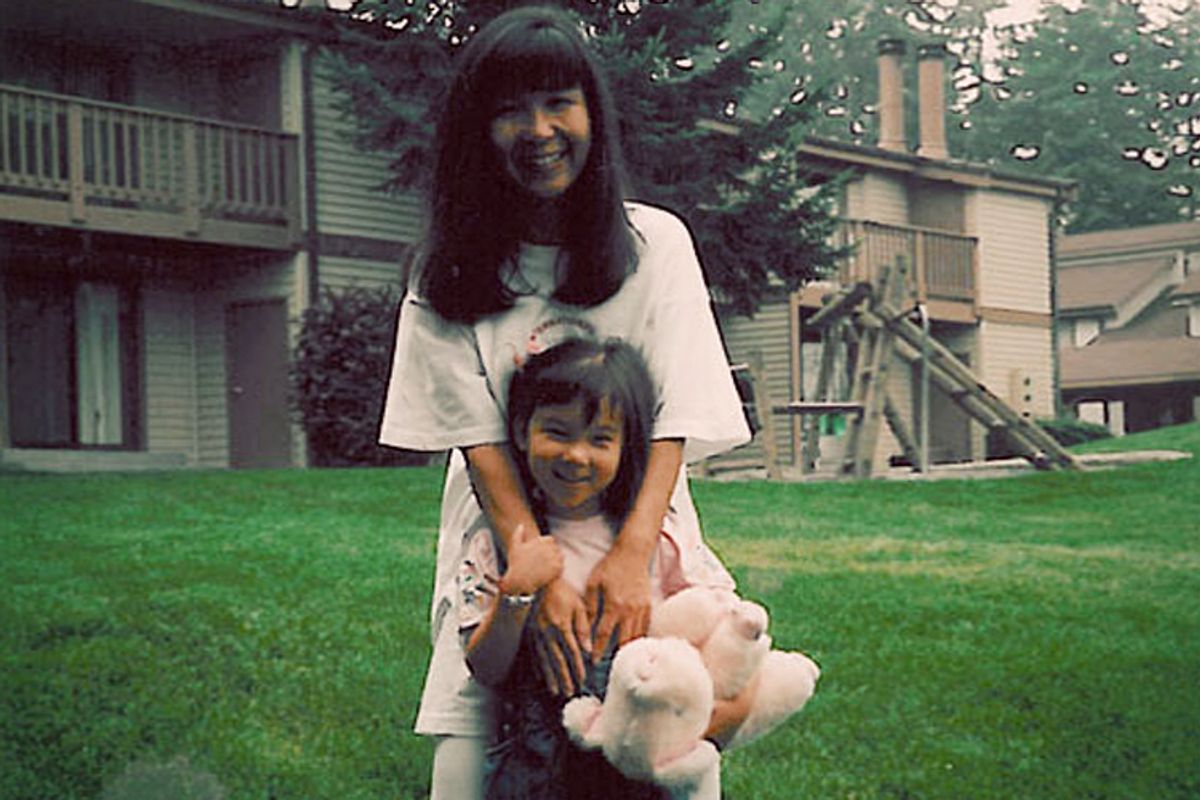 One morning, between bloomy sips of jasmine tea, my mother decided it was finally time to retrieve the jade bracelet from the safe.

My mother didn’t wear jewelry — her pierced ears went unadorned and she no longer wore a wedding band. The jade bracelet was the exception. The bangle was a seamless ring of jade, half an inch thick, heavier than you’d expect. It was smooth and cold as a bar of soap. Placed on a table the bracelet didn’t just clink, but left gentle vibrations hovering in the air. Unlike inferior jade, dyed to achieve its artificial emerald color, my mother’s bracelet was naturally translucent. This jade was pale as the moon, the softest whisper of green. Its flawless surface broke into endless fragments of colors when held to the light. With her tiny wrists, only my mother could slip it on without forcing her fingers into a fleshy cone, without squeezing the stone over her knuckles.

The bracelet had been shared among the women in my family for hundreds of years, passing from mother to daughter, each generation’s blessing upon the next. It had survived travel through China, where my grandparents fled the Communist Revolution, Taiwan, where my mother was born, and finally the United States, where my mother and I lived in Seattle. Not even my 95-year-old grandmother, who received the bracelet as an 18-year-old bride, knew how it came into the family. She claimed it was an antique from the Qing Dynasty, that our ancestors were wealthy then. I always suspected the bracelet might be worth a great deal. For years my mother said she’d seek a professional opinion, but she never did. She knew the bracelet’s monetary worth would never outweigh its sentimental value.

The bracelet lived in a safety deposit box at the bank for most of my life — my mother didn’t want to risk losing or damaging something so precious. But she abruptly changed her mind when I entered high school. The afternoon we retrieved it she said, “I want this to be more than a bracelet to you, and that means I need to wear it.” I didn’t know then what she could possibly mean, and she didn’t explain.

From then on, unless gardening, showering or sleeping, my mother never took the bracelet off. Each night she placed it atop her dresser, where it stayed as cool as marble, even in the summer, until reunited with her skin. Each morning she reached for it before putting on slippers and heating a kettle. By the time the kettle sang, the jade warmed to my mother’s temperature, as much a part of her as blood or bone. It breathed and sighed with her, understood her, reflected her spirits. I came to expect them together, my mother and her eternal halo, night or day, fall or spring, whether she dressed in denim or silk.

“Someday,” she always said, “it will be yours.”

A creamy red streak ran down the bracelet like a drop of blood diffusing through milk. I initially assumed it was an imperfection, a mistake my mother didn’t shy from correcting.

“Only certain kinds of jade have this,” she said, one of the few times I ever heard her speak with distinct pride. “Good jade.”

She explained that when you wear jade, you build a relationship together. In addition to heating the stone with your warmth, the oils from your skin polish the jade and affect its color. My mother believed it absorbed her chi, her life force. When my great-great-grandmother first touched the bracelet, the streak was probably a gentle blush. The longer she wore it, the richer that vein became. On my mother’s wrist, the streak glowed deep rust. It intensified every day, every year, every generation.

“You become part of the bracelet,” she said. “That’s why I wear it — so there’s some of me when it goes to you.”

I’d always known that the bracelet would be mine, and that it would someday be my daughter’s, but it had never enchanted me until then. My mother had grown up in Taipei with a fundamental appreciation for jade — she understood its symbolism of Chinese values, its implications of spirituality and luck, its power throughout China’s history — but I didn’t even speak Mandarin. I was only half-Asian, a child of the American ’90s, lover of Beanie Babies, Lunchables and "The Little Mermaid."  I had always felt disconnected from my mother’s heritage, but the bracelet now called to me. The women in my family had nurtured that color, each playing a distinct role in the bracelet’s history. We gave the jade life, and it breathed life back into my ancestors. How much of my mother would go into that bracelet? How much of me?

I graduated high school and moved to the East Coast for college. My relationship with my mother seemed to benefit from space; I felt even closer to her than I had in high school. When I flew to Seattle during breaks, her hug pressed the bracelet against my back, and I knew I was home.

She called me last November. Her voice, usually so measured, wavered. Her sniffles sounded like crumpled aluminum foil over the line.

“Elissa, I don’t want to you to panic, but our house has been robbed.”

We lived in a two-bedroom house in a nice-enough suburb of Seattle. We knew our neighbors. I’d never been scared to walk home by myself. Some nights in high school, I lay alone on our driveway and stared at the stars, even falling asleep outside once or twice. I couldn’t imagine thieves on our street.

“How did they break in?”

“They popped my bedroom window out of the frame. The police said it was probably a couple people.”

“Shit. There probably wasn’t much to steal … They must’ve taken the TV.”

“The TV, my computer. Those seem to be the big things. They knocked over your bookshelf and I can’t open your door all the way, so I don’t know what’s gone from your room.”

“OK.” I needed to stay strong for her sake. “It’s OK. It’s just stuff, Mom. Maybe insurance will cover some of it. You called the police? Can you get someone to help clean up?”

“They took the jade bracelet, too.”

She forgot to put it on that morning. She simply forgot. It was sitting atop the dresser when the robbers broke in. They’d probably shoved it into a pocket, carelessly thrown it into a bag. They couldn’t have known what it was worth — what it was really worth.

I never dreamed the bracelet could be stolen. Would be stolen. A wave of agonizing grief washed over me, followed by a slow, intense bitterness, which settled at the bottom of my heart like oversteeped tea leaves. I would never have the chance to inherit it. I’d been cheated of that. All the history that enriched the bracelet — lost. I imagined skipping school and flying home that night. I saw myself checking pawn shops, online sellers, sure I would recognize my family’s jade anywhere. But I knew such efforts would go unrewarded. Not in a city as big as Seattle. Wherever the bracelet ended up, it would never be ours again, and its new owners would never know its story. That, too, had been stolen.

I hoped I’d eventually move on. That I’d look back and ruefully conclude that things are just things: “At least they couldn’t steal my memories!” And that’s true. No item could celebrate my mother as much as my time with her. The jade brought me closer to my Chinese heritage, a connection I still cherish. But I’d be lying if I didn’t admit that I had attached myself to the bracelet, and when it was stolen, a part of me was taken too. I’ll remember what the jade meant, but I’ll never intensify that red. Its legacy will never call to my future daughter. Wherever the bracelet goes, my family’s history will fixedly follow. I don’t know if that hurt will ever lift.

Sometimes I think back to the day my mother unlocked the safe. She could have left the jade there, where it would have stayed until I inherited it. She could have ensured its protection from damage, destruction, disappearance. I don’t think she was ever “meant to forget.” But despite everything, I’m glad she brought the bracelet home. I see so much of that bracelet in my mother herself — like quality jade, she is humble, resilient and tough enough to scratch steel. Her beauty belies humility and strength.

I don’t know when I’ll be home again, but when I am, my mother will greet me generously. She’ll put on a kettle and insist I buy a thicker coat. And she’ll be there for me day or night, fall or spring, whether I dress in denim or silk.

Elissa Bernstein, 21, is a freelance writer whose work has appeared in the Seattle Times, boston.com, the Huffington Post, and more.